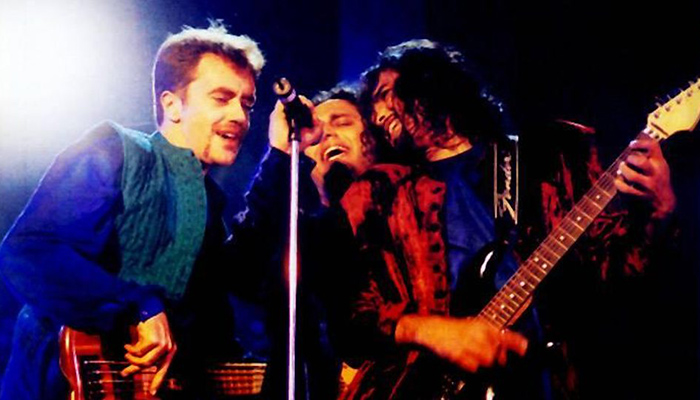 Pakistani music industry is set to experience another boom since lead singer Ali Azmat has hinted at a possible reunion of the legendary folk band ‘Junoon’ this year. He captured the interest of thousands with the following question he posted on social media:

The singer in his post, however, did not mention anything about the nature of the reunion. Whether it would be temporary or on a permanent basis? Perhaps a little more patience is required until Azmat shares the plan for the reunion in full detail.

This news has delighted the masses as at one point in time, Junoon was the biggest band in South Asia.

Ali Azmat and Salman Ahmed have been following their solo careers in music since the band’s split. They have both been featured in several sessions of ‘Coke Studio’ as well.

However, it would be refreshing to see the trio including Brian O’Connell coming back from the United States to join this reunion. This reunion is indeed a treat for all Pakistani music lovers.

Sufi Muslim love poetry set on a rock theme were the types of signature songs produced by the band.

The band’s career has produced numerous hits like Sayonee, Dum Must Qalandar, Ghoom Tana, Dosti, Alvida, Saeein, and many others.

Junoon has performed in collaboration with other great artists such as Nusrat Fateh Ali- the King of Qawwali. Also with international stars like Melissa Etheridge, Alicia Keys, Sting, A R Rahman, Earth Wind and Fire, and Wyclef Jean. The band gained international publicity by performing at diverse venues like the U.N. General Assembly Hall—the first performance of its kind in 2001.

People are now anticipating a powerful comeback from the trio. Also, expectations run high that band will successfully revive that 90’s theme and bring back some tremendous memories for old fans of the band.

Will the Muslim Military Alliance bring trouble for Pakistan & other Islamic Nations?