Aliens did not beat PMLN in elections, the common man did 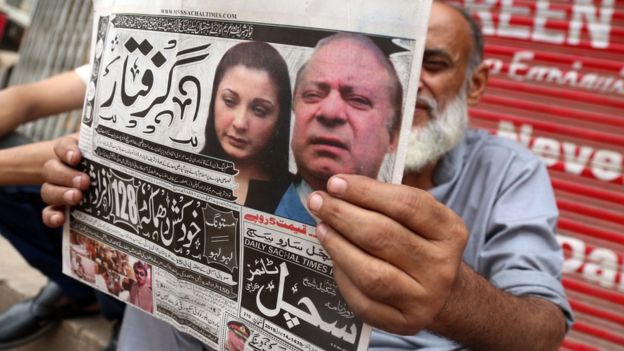 It was a hot and sultry morning, and I was part of the long queue outside the polling station in one of the constituencies of Lahore. Despite being an early morning, families comprising old and young were ebulliently sharing their preferences. I, being a Lahorite for generations, am slightly familiar with the collective temperament, responses, and proclivity of inhabitants of the city. The wind was still but something was seething in the air. After casting my vote, which took more than an hour, I was driving back home with my mother. We were silent, an unusual thing when we are together. I spent the rest of the day talking to my friends and extended family members. Lahore was not the same and the direction of the wind was suggestive of surprise.

The debacle of PMLN in the election is not the result of invisible human hand. It is the natural response to their apathy and indifference to the needs of a common man.

The day which dawned with emotions and activity was snuggling down at the dusk. People were glued to their television sets waiting for the verdict. In the next few hours, public opinion changed the course of an old river. People repudiated the claims of development and preferred to ingratiate with the promise for future. PMLN was routed and Imran Khan became the new line of hope. Nawaz Sharif’s slogan failed to produce the dividend for his party. Pakistan establishment, as they claim and project played against them for orchestrating their defeat. The clamoring for manipulating the process was also heard by some other losing parties.

Nonetheless, since 2013 PMLN and PTI have emerged as natural competitors in the national political arena, marginalizing all other political parties including PPP. The ship of PMLN is wobbling in the rough sea and its leader in long confinement after being declared as a convict from the Accountability court. Immediately after the announcement of initial results, a media campaign against the integrity of the electoral process was launched. In the backdrop of PMLN humiliation in election amidst towering claims of development and public service delivery one needs to explore the facts in a dispassionate way.

Genuine democracy thrives on the principle of pluralistic participation of people and institutions. Democratic forces try to remove fault lines with the help of mutual consultation in order to ensure the sense of inclusiveness. Ethnocentrism at a broader level is accepted but the promotion of an ethnocentric style of governance for the promotion of special class or community within the state is an anathema to democracy. Loyalty and patriotism emanating from the policies and actions of the political leaders help people repose their trust in their political parties.

The personal conduct of political leaders should reflect the aspiration and dreams of a common man. The positive perception regarding the propriety of governments’ projects also holds weight to creating public preference at the time of right to choose on the voting day.

PMLN government has tried to be autocratic in decision making on a number of sensitive issues. The faux pas while drafting the Khatam e Nabuvwat bill doomed the political prospects of PMLN. It was not the hand of military establishment which crafted the integration of religious group into one entity against the then political government. In fact, it was the ambivalence and the dilly dally of the political government that led to the hurly burly. Prior to the inept handling of the issue, the gulf between PMLN and right-wing forces existed on the execution of Mumtaz Qadari. In this election, the right-wing vote was not available in order to balance the power equation for PMLN.

The business community, that has been the strong hinges for PMLN power base remained wary to the economic policies of a former government. Imran Khan quite cleverly capitalized on the newly created crevice between the two complementing groups. During his election speeches, he tried to woo the business community by promising reduction in the sales tax rate which is at present collected at the rate of 17%, and it apparently worked.

Nawaz Sharif’s slogan failed to produce the dividend for his party. Pakistan establishment, as they claim and project played against them for orchestrating their defeat.

The rival parties successfully created the impression that the leadership of PMLN was a stooge to an international establishment and not sincere to the interests of the country. Phony or real, the common man flowed with this impression. The unleashing of the Panama scandal proved to ice on the cake. The subsequent events which culminated in the conviction of NS forced people to explore other political choices which remained untried hitherto.

The perception regarding NS agenda to promoting his daughter as his political successor also took the toll. The supporters of the NS party construed NS gestures as detrimental to the cause and political survival of PMLN. The fear went across that NS was self-obsessed and not even willing to trust his brother or nephew in the game of power.

Lastly, a new generation had already blossomed and joined the stream as voters in 2018. They displayed sentiments of strong nationalism in a more pronounced way than their elders. The accumulation of ill-begotten money forced this newly emerged class to look the other way. They challenged their elders to alter voting preference on the ground that these leaders were not true sons of the soil. They stack their fortune overseas and spend all national events away from Pakistan with their families who are permanently settled abroad.

The debacle of PMLN in the election is not the result of invisible human hand. It is the natural response to their apathy and indifference to the needs of a common man. Their vaulting claim of infrastructure development is not an answer to the suffering of people who are forced to live under subsistence level. The façade of infrastructure development is also mired in corruption and kickbacks. Pakistanis are silent observers but have learned to act in time. The present lackluster post-election reaction of PMLN needs introspection instead of hurling accusations and maligning institutions of the state.

Bushara Zafar is a Lahore based teacher and a social activist. She can be reached at zbushi@hotmail.com. The views expressed in this article are author’s own and do not necessarily reflect the editorial policy of Global Village Space.

Pakistan: Hard choices ahead for a ‘Soft State’