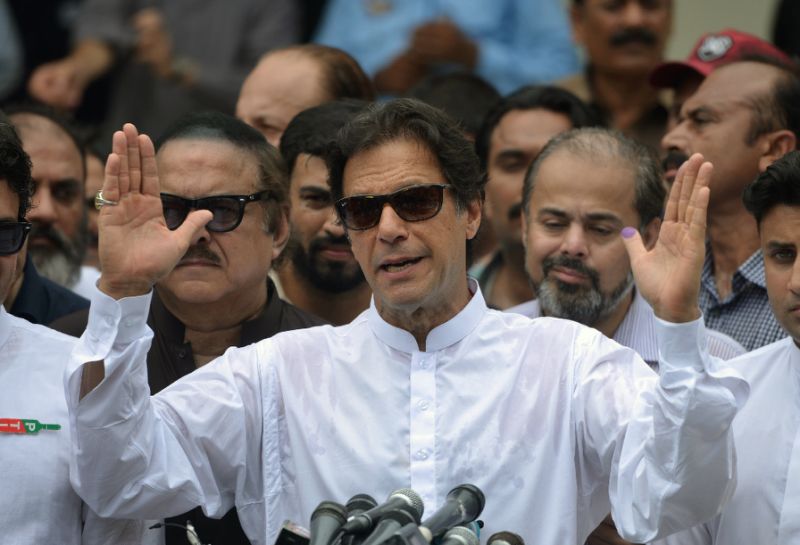 Pakistan’s main parties rejected the outcome of elections won by cricket star Imran Khan and announced protests demanding new polls Friday, after foreign observers criticised the pivotal vote over rigging allegations. The announcement by the All Parties Conference (APC), including the outgoing Pakistan Muslim League-Nawaz (PML-N), is a fresh obstacle to power for Khan on a day when delayed results finally showed he had won an emphatic victory — though he will need to seek a coalition to form a government.

The nationwide election held Wednesday has been criticised by the United States, the European Union and other observers after widespread claims that the powerful military was trying to fix the playing field in Khan’s favour. It had been dubbed “Pakistan’s dirtiest election” but for now, Khan’s victory represents an end to decades of rotating leadership between the PML-N and the Pakistan Peoples Party (PPP) that was punctuated by periods of military rule.

Known in Pakistan as “Taliban Khan” for his calls to hold talks with insurgents, he increasingly catered to religious hardliners during the campaign, spurring fears his leadership could embolden extremists.

The PML-N and other parties have alleged “blatant” rigging over the vote count. “We think a robbery has been committed,” Maulana Fazalur Rehman, head of the religious Jamiat Ulema-e-Islam (JUI-F) party, told reporters. “We will run a movement for the holding of elections again. There will be protests… We will not allow democracy to be taken hostage by the establishment,” he said, using a word widely understood in Pakistan to mean the military.

The PML-N, which claims it was the target of military manipulation, said it would join in the protests although no date was immediately announced. “I fully agree with it. The worst kind of irregularities have been committed, which are unprecedented,” party leader Shahbaz Sharif said.

However, Sharif said he would need to consult with his party’s leadership over a decision by the APC not to take the oath swearing in members of parliament. The Pakistan Peoples Party (PPP), which has won the third largest number of seats in the vote, was notably absent from the APC.

In a later press conference, PPP chairman Bilawal Bhutto Zardari said his party also rejected the election results, but vowed it would try to convince the other parties to participate in the parliamentary process.

The vote was meant to be a rare democratic transition in the Muslim country, which has been ruled by the powerful army for roughly half its history. But it was marred by violence and allegations of military interference in the months leading up to the vote, with Khan seen as the beneficiary.

The nationwide election held Wednesday has been criticised by the United States, the European Union and other observers after widespread claims that the powerful military was trying to fix the playing field in Khan’s favour.

EU observer mission chief Michael Gahler pointed to a “systematic effort to undermine the former ruling party through cases of corruption, contempt of court and terrorist charges against its leaders and candidates.” The United States said it was concerned about “flaws” in the pre-electoral process, but was ready to work with the new government.

Heather Nauert, spokeswoman for the US State Department, said Washington agreed with the EU’s observation that “positive changes to the legal framework for elections in Pakistan” were eclipsed by “restrictions on freedom of expression and unequal campaign opportunities.”

The Election Commission (ECP) said Friday that with only a handful of seats left to count, Khan’s Pakistan Tehreek-e-Insaf (PTI) will be the biggest party in parliament. But the count indicates PTI will not achieve the 137 seats needed in the National Assembly to form a majority government.

Read more: Nawaz and his doubts about G.E’18

Analysts had long predicted that if Khan took power, it would have to be via a coalition — but the size of his lead still took many by surprise. Analyst Ayesha Siddiqa said observers may have underestimated the depth of feeling among Pakistan’s growing middle class.

“Remember, they grew up on this narrative of a corrupt Pakistan being damaged and needing a new leadership… In all this hue and cry, we didn’t notice there is another Pakistan there that wanted this change,” she told AFP. Khan campaigned on promises to end widespread graft while building an “Islamic welfare state.”

In a later press conference, PPP chairman Bilawal Bhutto Zardari said his party also rejected the election results, but vowed it would try to convince the other parties to participate in the parliamentary process.

Now, the former World Cup cricket champion will have to partner with independents and smaller parties, a task analysts said should be straightforward. “The independents know that the establishment is inclined toward Imran Khan,” retired general and analyst Talat Masood told AFP.

Khan claimed victory in a wide-ranging address to the nation Thursday. He vowed to tackle corruption and touched on promises to balance relations with the US, while saying he was open to discussions with arch-rival India, including over the disputed Himalayan territory of Kashmir.

Khan will face myriad challenges, including militant extremism, an economic crisis with speculation that Pakistan will have to seek a bailout from the International Monetary Fund, water shortages and a booming population. He will also have to contend with the same issue as many of his predecessors: how to maintain a balance of power in civil-military relations.

In the West, Khan is typically seen through the prism of his celebrity and high-profile romances, but at home he cuts a more conservative persona as a devout Muslim who believes feminism has degraded motherhood.

Known in Pakistan as “Taliban Khan” for his calls to hold talks with insurgents, he increasingly catered to religious hardliners during the campaign, spurring fears his leadership could embolden extremists.

Constitutional Amendment Bill for fresh delimitations: from government’s actions to the opposition’s reactions