On offer are pre-rolled joints starting at $18 dollars apiece, highly potent concentrates, some edibles, and accessories such as bongs, pipes and dabbing devices. 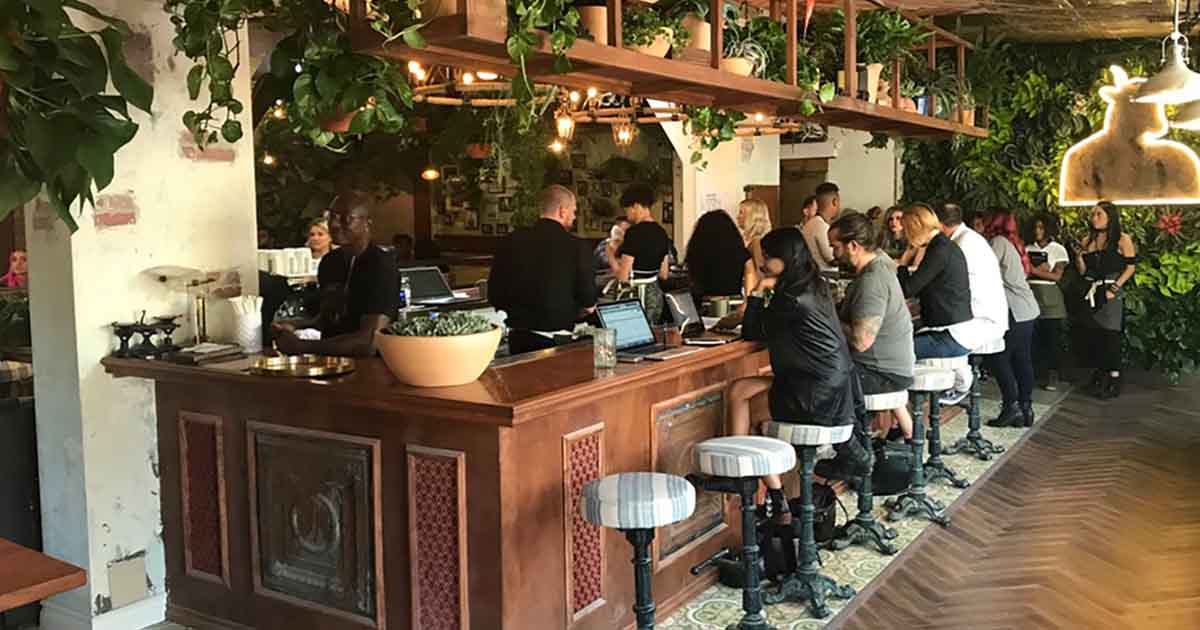 Called Lowell Farms: A Cannabis Cafe, the much-hyped 240-seat establishment is open to people 21 and over, who can order from a cannabis menu just like they would a wine bottle.

“Flower Hosts,” or “budtenders,” help patrons navigate the menu, giving advice to connoisseurs or novices on what strain of cannabis to order with their meal and the potency and flavor of each product.

On offer are pre-rolled joints starting at $18 dollars apiece, highly potent concentrates, some edibles, and accessories such as bongs, pipes and dabbing devices.

“It’s amazing to be a part of making history, I never thought I would have been,” said executive chef Andrea Drummer as she surveyed diners at the soft opening of the eatery on Monday.

In California, which has the world’s largest legal marijuana market, recreational pot became legal in 2018

“It’s important to have a safe space to consume in a very communal setting,” she added. “The only other place that I know that to be the case is Amsterdam.”

She said customers were flying in from different parts of the country, and one couple was even traveling from Britain, to take part in the grand opening on Tuesday.

The cafe’s launch comes as more and more states across America have legalized marijuana in recent years, both for medicinal and recreational purposes. The drug, however, remains illegal at the federal level.

In California, which has the world’s largest legal marijuana market, recreational pot became legal in 2018, setting off a mad rush by entrepreneurs to cash in on the multi-billion-dollar industry.

Seven other eateries similar to “Lowell Farms” are expected to open in the near future in West Hollywood, one of the first cities in the country to embrace the concept.

Everyone is smoking in this restaurant. Lowell Farms Cafe is the first legal cannabis restaurant and lounge in the U.S. It opens officially tomorrow in West Hollywood. I have a preview. #cannabis #cannabiscafe pic.twitter.com/mF3LSqeosk— Carlos Granda (@abc7carlos) September 30, 2019

“This is a great idea and I do think that normalizing cannabis is something that we should do,” said Derek Bollella, 22, a business student who drove 45 minutes on Monday to be part of the happy few who managed to secure a reservation at Lowell’s.

“If you go to Amsterdam, they have one of these every 10 feet,” he added as he smoked a joint while munching on nachos topped with avocado. “They tried that over there and it seems to work.”

Antonela Balaguer, 23, another patron sitting nearby with a friend, said it was only fitting to finally have a cannabis cafe where customers could get high while enjoying some “nice stoner food.”

“I could probably come here every day,” she said. “I would consume cannabis every day if I could.”

Drummer said the restaurant’s 40 “Flower Hosts” have been trained to keep an eye on guests to make sure they are able to tolerate the cannabis they order and that nothing gets out of hand.

“Our bud hosts are very proficient in enquiring and asking guest where they are at in their consumption level,” she said. “You go to a bar and you know the cut-off point for the person who has ordered five whiskeys. So you have a conversation if that is the case. ”

For Matt Kirschner, the new eatery is long overdue and marks a major milestone for the country.

“This is the greatest thing that the United States has implemented into its culture in a while,” said the 22-year-old law student as he smoked a joint and nibbled on mac and cheese bites and a chicken sandwich with a friend at Lowell’s.

Read more: El Chapo to get life sentence from US judge

Xi Jinping: The leader who gave the world ‘Belt and Road’