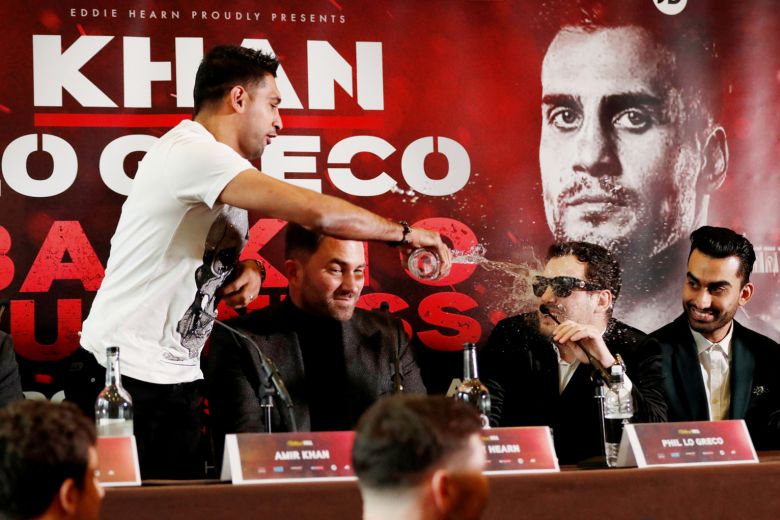 Amir Khan threw water over Phil Lo Greco after being taunted by the Canadian at a press conference to promote the British boxer’s return to the ring after almost two years away.

Khan’s comeback, which comes after a period of marital difficulties and a spell in the “I’m a Celebrity” reality TV jungle, will see him take on Canadian Lo Greco in Liverpool on April 21.

Lo Greco, who has won 28 of his 31 fights, mocked Khan by insisting he had been on a “losing streak” in and out of the ring since losing his last fight against Saul ‘Canelo’ Alvarez in May 2016.

Khan responded to the jibes by throwing water towards Lo Greco at the press conference in Liverpool, prompting security to intervene before Khan insisted he would take the bout as seriously as ever.

“I will train like it’s a world-title fight. Greco says maybe I’m past my best. I’m 31 and at the peak of my career,” Khan said. “For me, boxing is the way forward. Boxing put me here and I am going to finish on a high.”

Cynics may suggest Khan’s antics were designed to reignite his public interest in him since signing with promoter Eddie Hearn, who has made no secret of his desire to make a domestic super-fight against welterweight rival Kell Brook happen.

Brook returns to the ring for the first time since he lost his IBF welterweight title to Errol Spence last year when he faces Sergey Rabchenko in Sheffield next month.

Read more: Will we see Amir Khan in a reality TV show?

Khan, an Olympic silver medalist and former world champion is looking forward to a successful return to the ring in April after a devastating knockout loss two years ago. His domestic dispute with wife Faryal was all over the news in 2017. Can he put the family drama behind him and make a strong comeback against his tough Canadian opponent?

Hospitals filling up in Europe’s most polluted capital