Asad Vs Shahbaz: Pointscoring or a conflict of narrative? 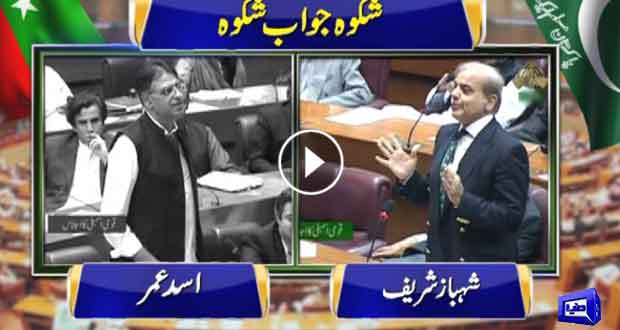 The incumbent Finance Minister Asad Umar and the opposition leader Shahbaz Sharif confronted each other during a National Assembly session in a debate over the economic policies of the government. Shahbaz lashed out at the PTI government for alienating its election pledges and displaying nepotism. He bashed the government for importing the advisors and installing the friends and servants on important government positions.

The former Chief Minister of Punjab attempted to leave the impression on the assembly floor that the PTI fooled the public in a disguise of the “harbinger of change”. Shahbaz tried to induce that in spite of making claims of establishing a team of excellent individuals, PTI compromised on meritocracy and hoodwinked the public with the slogans of “austerity drive”. Shahbaz criticized the government for not welcoming the Chinese officials properly and pursuing anti-state policies.

PTI government in its 100-day agenda pledged to bring energy prices in alignment with regional competitors to revive the manufacturing and to facilitate rapid growth of SME sector.

Moreover, Shahbaz recounted the accomplishments of his government. He criticized the government for slashing the 30% of Public Sector Development Programme (PSDP) from Rs800 billion to Rs 575 billion, which would negatively affect the GDP growth and development. Continuing his attack, he said that the PTI had cut the CPEC budget and was increasing the gas prices, making it difficult for common people to make ends meet. He claimed that the PTI’s proposal to bridge the public expenditure gap through a public-private partnership was unrealistic and would adversely affect the spending on education, health, and other rudimentary requirements.

In his response to Shahbaz’s scathing comments, Asad Umar said,” the way Shahbaz Sharif explained the situation and policies, had he been the finance minister in the previous regime,  we would never have to face such difficult economic situation.” Umar defended the gas price hike allegations and reminded the opposition leader that gas prices for poor have only been increased by 10% and most of the burden has been put on a rich segment of the society.

He informed the legislators that Oil and Gas Regulatory Authority had recommended the gas price hike even before the PTI formally took over the government. Moreover, Asad Umar told that the government is extending a Rs 44 billion subsidy on gas supplied to export industries in Faisalabad, where industry faced a steep decline in recent years, which led to huge unemployment. In addition, on average government increased the gas price by 30% and the major burden is on those who consumed more gas. Therefore, average consumers won’t get a hit.

Shahbaz lashed out at the PTI government for alienating its election pledges and displaying nepotism. He bashed the government for importing the advisors and installing the friends and servants on important government positions.

He condemned the PML-N government for leaving the circular debt at Rs1, 180 billion and failing to capitalize on historic low crude prices. The finance minister reminded the former chief minister that PML-N government exported a large amount of urea resulting in a shortage of fertilizer at home. Consequently, the cost of production increased for farmers.

He ensured that unlike the previous regimes, the government is serious about increasing the tax net. The former corporate sector giant not only promised a crackdown on tax evader but, also warned the non-tax payers of stronger implementation of existing policies.

He termed the National Assembly and Senate’s finance committees,  platforms to raise the issues and urged the opposition to facilitate the government in finding the solutions of the problems. He promised to review the decision of allowing non-filers to purchase property and vehicles and promised to modify the policy, and accommodate opposition concerns if required. PTI led coalition government has increased the taxes on imported luxury food items like cheese, and expensive smartphones etc. which would not affect the poor.

Asad Umar earned his reputation in the political circles as the most vigilant and active performer during the PTI opposition days. During the media discussions, he not merely criticized the government policies but, also presented the alternative economic policies. Despite this, Umar—a well-known and the successful former corporate wizard faced a barrage of criticism over his economic policies presented in his maiden mini-budget.

Why did the Government Raise the Gas Price?

The calculations of the Sui Northern Gas Pipelines Limited (SNGPL) and Sui Southern Gas Company Limited (SSGC) show the revenue requirements of Rs 275 billion and Rs 211 billion, respectively for the financial year 2018-19. But, on the contrary, at the current sales prices, the projected revenue of the SNGPL and SSGC is Rs 172 billion and Rs 157 billion, respectively. Resultantly, both the companies can potentially face collective loses of Rs 156 billion.

In addition, on average government increased the gas price by 30% and the major burden is on those who consumed more gas. Therefore, average consumers won’t get a hit.

The OGRA and the Federal government was apprised of the situation and was advised to order the required hike in the prices to allow the companies achieve their projected revenue based on cost plus return on assets formulae under license from OGRA. The PML-N’s government withheld the increase in gas price during its term. The failure to requisite revisions in gas sale prices in the last tenure led to the accumulation of revenue shortfall of over Rs 127 billion. Asad apprised the parliament of the reasons for the increase in the gas prices.

The opposition is adamant that gas price hike would result in inflation and an eventual slowdown in the economy as the cost of doing business would increase. PTI government in its 100-day agenda pledged to bring energy prices in alignment with regional competitors to revive the manufacturing and to facilitate rapid growth of SME sector.

Since Pakistan is facing the colossal financial challenges, the government would have to take some difficult decisions. Government is under huge pressure to fill the hole in its finances. There is no denying that the government would continue to face a backlash over its decision to increase gas prices. In a current financial turmoil, this is a hard pill to swallow, and the previous regime should be sparred with for deliberately not increasing the price causing loses of billions to the exchequer.