Radical rightist religious parties have resorted to violence against Pakistan's Feminists and the Chairman of JUI-F, Maulana Fazl ur Rehman has again asked his workers to stop Aurat March by force. One may agree that the Aurat March is loud, bloated, offensive and politically incorrect but so is Patriarchy. 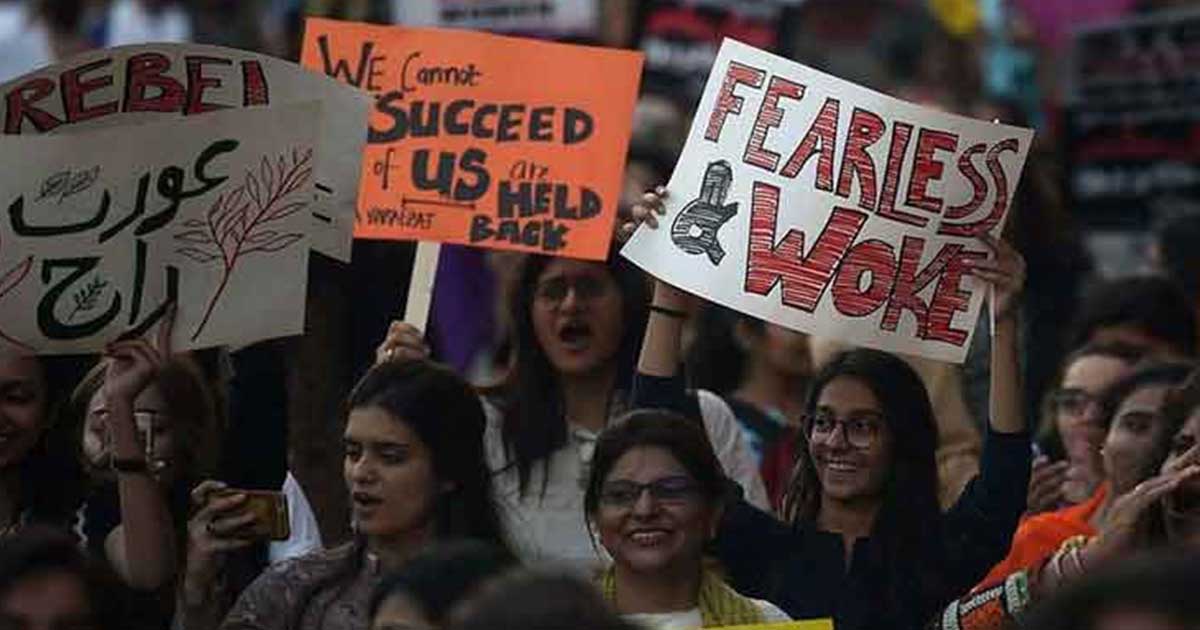 An elaborate mural of posters was exhibited at Hussain Chowk in the capital of Punjab, only to be vandalized and ransacked. This has been termed to be a hate crime by the masses. A hate crime to whom? Women. The mural comprised of posters, several compositions of satire, agony and even some offensive to the male gender, pinching where it hurts the most: their masculinity. Is this justified or a line has been crossed?

Aurat March refers to an organized series of protests carried out in major cities of Pakistan including Lahore, Hyderabad, Islamabad and Karachi on account of the International Women’s Day that is the 8th of March. The ideology was first initiated by a women’s collective called ‘Hum Auratein’ (We Women) and followed by organizations such as ‘Women Democratic Front’ amongst many others. This march claims to call on the atrocities committed against women including violence, abuse, consent and the plain old Patriarchy.

Aurat March seemed to have gotten out of control as the online war between the two sides lit up. Even the public figures like Kishwar Naheed said, ““The next time you make such slogans, remember your culture, your traditions.”

This movement was joined by women as well as men last year who endorsed novelty t-shirts and slogans that shattered chauvinism to the core, offensive to many in the culture-driven region of South Asia. Zuneera Shah, a founder of the notion, exclaims that Aurat March localizes the notion of Feminism that has been infamous earlier in the country. Concepts such as ‘Pidar Shahi’ (Patriarchy) have become a norm in discussions post the events. Nighat Dad explains in her article that “The agenda of this march was to demand resources and dignity for women, for the transgender community, for religious minorities and for those on the economic margins but more importantly to acknowledge that women’s emancipation is inherently linked with the improvement of all mistreated groups and minorities.”

These marches have gained immense support and popularity, however, these have not been well received by many, some even resorting to violence to quash the movement altogether. Others have tried knocking on the judicial doors. The marchers were termed vulgar, derogatory to the identity of women and insolent. The trending feature on the social media garnered hate and trolling by the incognito web-users.

The Aurat March seemed to have gotten out of control as the online war between the two sides lit up. Even the public figures like Kishwar Naheed said, “The next time you make such slogans, remember your culture, your traditions.” There also has been a debate that the approach used in this phenomenon is Radical feminism.

Albeit, one is forgetting that 500 women are annihilated by their own families annually for damaging their so-called ‘honour’. This is a nation where minors are sexually abused and mercilessly murdered. A country where more than 80 per cent of women lack a voice, freedom of expression and even financial inheritance. Feminist Sadia Khatri supports the movement and says that they should go ahead with the offensive posters. It is evident that this not an effort to bring forth Matriarchy as it is not even visible afar, it is not even about equal rights for the eighty per cent of the women but mere rights, mere voice.

Neo-Feminism comes in action when the masses, even the women themselves are aware of their own rights and hence acknowledge their role in society. Thus, women and feminists collaborate with men to ensure the deliverance of equal rights. However, in a society where masculinity is used as a weapon and misinterpreted to keep women ‘in their place’, Radical feminism is the only way to stride forward and it may have its consequences.

A Petition was filed in the Lahore High-court by the ‘Judicial Activism Council Chairman’ to stop the Aurat March this year for being against ‘the very norms of Islam’. The appeal was rejected by the Chief Justice as the freedom of speech is virtually a birthright of every Pakistani. Radical rightist religious parties have resorted to violence and the Chairman of JUI-F, Maulana Fazl ur Rehman has again asked his workers to stop Aurat March by force.

Though it can be understood that the movement creates masculine anxiety in a Patriarchal society, and it can be very offensive to digest the derogatory slogans. However, given the reactions to the ideology one can understand the very reason why the Aurat March was conceived and supported by many. In a free society an individual has the right to have differing opinions and even voice them but shutting up others and replying with force means that something is fundamentally wrong in the roots of that civilisation.

It is evident that the Aurat March is loud, bloated, offensive and politically incorrect but so is Patriarchy.

Ali Sheikh teaches fashion and business studies at Roots IVY University. He is a writer and artist that works with acrylics and watercolors. His first novel is under publication. He studied Architecture and Design at the University of Liverpool, UK. The views expressed in this article are the author’s own and do not necessarily reflect Global Village Space’s editorial policy.

Previous articlePakistan’s cause of Kashmir: The role of our friends
Next articlePakistan economy is growing despite region’s ‘negative growth’: Hammad

16 September 2021
Previous articlePakistan’s cause of Kashmir: The role of our friends
Next articlePakistan economy is growing despite region’s ‘negative growth’: Hammad

Why did Justice Isa request SJC to make his reply public?