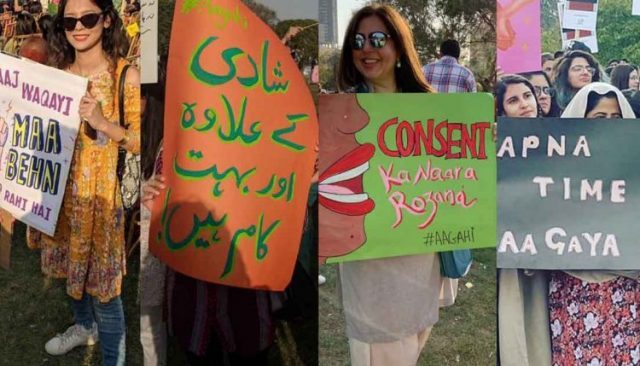 ‘Aurat March’ a rally voicing support for women’s liberation was held across the country to commemorate the International Women’s Day yesterday on March 8th, 2019.

Hundreds of enthusiastic women participants in the rally marched with interesting placards displaying various messages that manifested their concerns and aspiration being a member of the society.

By openly displaying their aspirations these women dared to take a step ahead in creating the environment that is traditionally, culturally and morally less binding upon them and releasing them from the repressive norms.

Where the rally attracted scores of women from various walks of life to join the platform it also garnered massive criticism on social media for displaying some of the offensive messages.

. Feminism doesn't teach you to hate duptta and other gender, which sadly. most feminists here fail to understand.
I just saw the banners, this is not the way of empowering women!
totallyDisgusting!!!#AuratAzadiMarch2019 pic.twitter.com/NxHW1DhmOB— Syeda Laila Jaffri 🇵🇰 (@Mohtermalaila) March 8, 2019

The critics accused the Aurat March missed the direction and failed to raise grave issues commonly faced by women that include education of women, career building, equal pay, a safer environment free from sexual molestation and harassment.

They said participants of the rally largely held placards that expressed scorn towards the opposite gender and undermined the cultural values of the society.

Read more: Why is it important to celebrate Women’s Day?

Giving references from Islam, several netizens disapproved the ‘Aurat March’ and pointed out that the marchers largely sought for emancipation in dress code and chanted slogans that were derogatory towards men.

Quran says,
Mane are the protectors of woman..
This for all those who were chanting stupid and dirty slogans Yesterday !!!#AuratAzadiMarch2019 pic.twitter.com/1KBzIWGCth

Surprisingly, amongst the critics were a large number of women that rejected this brand of feminism and instead argued that the emancipation of women is vital for the development but that should not be at the expense of slamming and abusing the opposite gender-male. They also disapproved the kind of liberation that is radical, non-conformist and falls shorts of basic civil manners.

The basic purpose of Women's day is to recognize & appreciate women for their achievements, not to cross all limits or criticize men. 😑

Similarly, several male users also objected to the raised slogans and presented counter arguments stating that supportive male also exists in the society and that they must be appreciated.

Today's #AuratAzadiMarch2019 is a perfect example of what I have constantly said : The biggest obstacle to progressive values and women's rights are these so called liberals and situational feminists. They have exposed themselves as non conformist radicals cut off from society— Richard Harris (@HarrisRichard77) March 8, 2019

NY Federal reserve: racial disparities in the US for COVID-19 aid