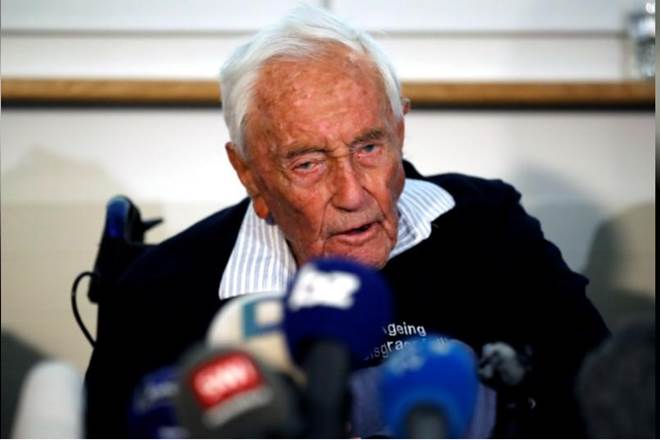 A 104-year-old Australian scientist on Thursday committed assisted suicide in Switzerland where he went to die after his home country denied him the right to seek help in taking his own life.

David Goodall did not have a terminal illness but said his quality of life had deteriorated significantly and that he wanted to end it. Goodall “died peacefully” in Basel, tweeted Philip Nitschke, founder of Exit International, the organization which helped Goodall make the journey from Australia.

The death occurred at 1030 GMT from an infusion of Nembutal, a barbiturate, at the Life Cycle clinic, he said. The honorary research associate at Perth’s Edith Cowan University set off from Australia a week ago and stopped in Bordeaux, France to see family before arriving in Basel on Monday.”I no longer want to continue living,” Goodall told journalists on Wednesday.

Goodall had asked for his body to be used for medical research or if that request was refused, for it to be cremated and the ashes dispersed locally.

Happy to end it

“I am happy to have the chance tomorrow to end it, and I appreciate the help of the medical profession here in making that possible,” he said. The 104-year-old said he hoped the widespread interest in his case would spur Australia and other countries to rethink their legislation.

“I would have preferred to have (ended) it in Australia, and I greatly regret that Australia is behind Switzerland” when it comes to right-to-die laws, he said. Goodall secured a fast-track appointment with the foundation in Basel after he attempted but failed to commit suicide on his own earlier this year.”It would have been much more convenient for everyone if I had been able to, but unfortunately it failed,” he said of the suicide attempt.

But he said he was happy that he had been offered the “Swiss option”, since he has been able to see most of his large family, which is spread over several countries, in the run-up to his final day.

Assisted suicide is illegal in most countries and was banned in Australia until the state of Victoria became the first to legalize the practice last year. But that legislation, which takes effect in June 2019, only applies to terminally ill patients of sound mind and a life expectancy of fewer than six months.

According to Swiss law meanwhile, anyone who is of sound mind and who has over a period of time voiced a consistent wish to end their life can request so-called assisted voluntary death or AVD.

Asked on Wednesday if he had any hesitations or doubts, the 104-year-old said: “No. None whatsoever.”In assisted dying, the person must be physically capable of carrying out the final deed on their own.

In Goodall’s case that meant he had himself to open the valve that allowed the short-acting barbiturate to mix with a saline solution and flow into his vein. Exit International said in a statement Thursday that Goodall wanted the Ode to Joy from Beethoven’s Ninth Symphony played during the procedure and that “David died at the moment the song (sung in German) concluded”.

Goodall had a final meal with his family — his favorite, fish, and chips followed by cheesecake — and his grandchildren and a friend stayed with him until his death. Nitschke said Goodall had asked for his body to be used for medical research or if that request was refused, for it to be cremated and the ashes dispersed locally. He wanted no ceremony after his death.