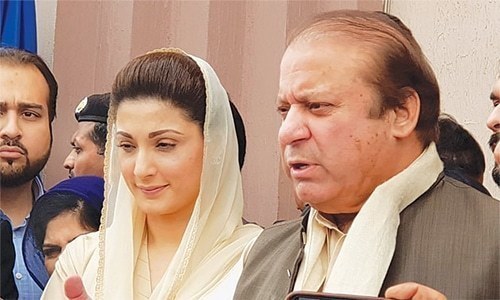 It is important to mention here that former Prime Minister Nawaz Sharif, his daughter, and son-in-law filed appeals before the IHC and challenged the decision of the accountability court in Avenfield reference awarding total 10 years imprisonment to Nawaz Sharif, 7 and 1 year to Maryam Nawaz and her Husband Captain Retired Safdar respectively.

These experts are of the view that the top court will also maintain the decision of the IHC.

The ousted Prime Minister Nawaz Sharif was sentenced to imprisonment under NAB ordinance Section 9(a)(v), which relates to owning assets disproportionate to known sources of income.

Nawaz’s counsel Khawaja Haris filed an appeal challenging the verdict against his client and requesting its suspension till IHC’s adjudication in the case. Similarly, Amjad Pervaiz filed the appeals on behalf of Maryam and Safdar.

The NAB has now maintained that the high court remained unable to properly examine the evidence related to the case. The decision should, therefore, be declared null and void.

Interestingly, the appeals filed by the Sharif family had chiefly pointed out some flaws in the verdict penned by accountability court Judge Muhammad Bashir. It stated that the Panamagate Joint Investigation Team (JIT) head and prosecution’s star witness Wajid Zia himself accepted that a response to the mutual legal assistance (MLA) request was not received.

It further said that levelling allegations without receiving a response to the MLA was mala fide. Moreover, the judge had mainly relied on, argued the Sharif legal counsel, assumptions and self-serving inferences, not on substantial evidence.

The court has also maintained that Mr. Sharif possesses assets beyond known resources.

Legal counsels of the convicts also contended that the prosecution’s witness Robert Radley not only stated that Calibri font was available for testing purposes, he admitted to having downloaded and used the Calibri font which was available as pre-release of Windows Vista known as BETA-1 since the year 2005 while simultaneously admitting that he was neither a computer expert nor an IT expert or a computer geek.

Later on, the IHC suspended the verdict on some technical grounds and ordered the immediate release of the ousted prime minister and his daughter. Legal experts have different views about the verdict penned by Judge Bashir of accountability court.

One pole of the experts believe, the judge has written an interesting verdict which relies on the evidence collected and examined by the JIT while probing into Panama Papers case. Since the JIT had provided a sufficient amount of evidence to the court, therefore it was quite legit and expected that the court would convict the former prime minister.

The other pole of lawyers and legal experts point out the court of Judge Bashir relied mainly on speculations and not on some strong legal basis to give the verdict. These experts are of the view that the top court will also maintain the decision of the IHC.

Whether the top court declares the decision of the accountability court null and void or not but one thing is important to mention here that the former PM has been declared a dishonest and untruthful person by the Supreme Court of Pakistan.

The court has also maintained that Mr. Sharif possesses assets beyond known resources. Now the court has to determine whether the accountability court gave a legally justifiable decision or a verdict based on some speculations of experts.