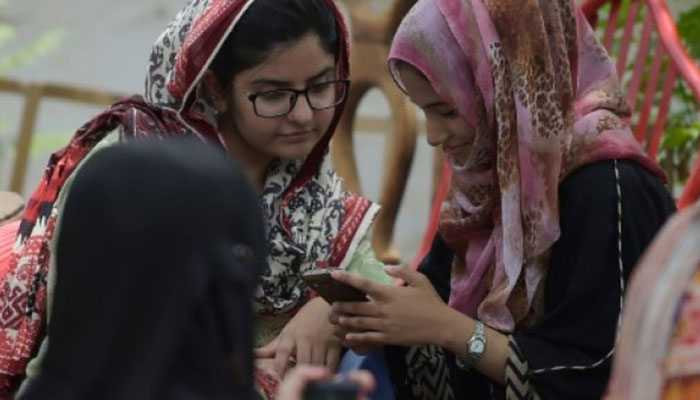 The crowd of young Pakistanis, many armed with smartphones, surround the politician’s car and begin streaming live footage of something extraordinary: angry voters asking their elected representatives what they have done for them lately.

Polls still broadly indicate youth support for PTI and Khan’s populist, reformist agenda, though the shine may have gone off the sportsman somewhat — one of the viral videos shows him being whisked away by aides as a similar crowd challenges him in Karachi.

A titanic 46 million people below the age of 35 are registered to vote in nationwide elections on July 25 — many of them savvy social media users who are posting videos calling out the powerful.

In one clip, an influential politician, landowner and tribal chief Sikandar Hayat Khan Bosan is filmed in his car in the central city of Multan surrounded by young men chanting “thief” and “turncoat”.

Read more: Independent Observers arrive in Pakistan, as the nation gears up for…

“Where were you during the last five years?” they ask Bosan, complaining over the poor state of roads in the area. An aide can be heard pleading that the leader is feeling unwell.

To be held accountable in such a public manner is virtually unheard of for most Pakistani politicians, especially in rural areas where many of the videos have been filmed.

Their feudal landowners, village elders, and religious leaders have for decades been elected unopposed. Many are known to use their power over residents to bend them to their will.

Dubbed the “electables”, these politicians command huge vote banks. Most also take a flexible approach to ideology and are highly courted by political parties, who view winning their allegiance as a passport to power.

Pakistanis only started to receive high-speed mobile data in 2014 and its use has spread at one of the highest rates in Asia.

But videos like the one of Boston have gone viral in the weeks leading up to the polls, shared thousands of times in a country of some 207 million people, of whom roughly a quarter use 3G and 4G internet, according to the Pakistan Telecommunications Authority.

They have also made their way on to Pakistan’s numerous and raucous television channels, ensuring they are also broadcast to audiences without access to social media.

Read more: A matter of growing insecurities: Terror during elections

Analysts are watching closely to see whether these rare moments of accountability might disrupt the way the major political parties have long relied on rural politicians and their huge vote banks as a shortcut to power.

‘My vote can bring change’

The videos’ popularity is a sign of simmering resentment against corrupt politicians among Pakistan’s youth, says Sarwar Bari, an analyst at the Free and Fair Election Network (FAFEN), a democratic watchdog.

Historically apathetic, young Pakistanis first emerged as a political force in the 2013 elections, when a generation who grew up idolizing cricketer-turned-politician Imran Khan voted for his Pakistan Tehreek-e-Insaf party in droves.

Under-35s represent a massive proportion of the total electorate of 106 million voters registered in the 2018 elections.  More than 17 million are in the 18-25 age bracket, with a huge chunk set to cast their ballot for the first time.

In one clip, an influential politician, landowner and tribal chief Sikandar Hayat Khan Bosan is filmed in his car in the central city of Multan surrounded by young men chanting “thief” and “turncoat”.

The Asia Foundation noted in a recent report that many young people are increasingly engaged in the democratic process, particularly through the widespread use of social media.

If so, and as concerns over election rigging mount ahead of the vote, the impact of uncensored content such as the viral videos could become significant, analysts say. “Social media has emerged as a democracy strengthening tool,” says Shahzad Ahmed, director of Bytes for All, a digital rights group.

Bari, who predicts election turnout will be “massive”, says if even half of the young voters who have seen and shared such videos go to the polls “it will strengthen the trust of the people in the democratic system.”

Pakistanis only started to receive high-speed mobile data in 2014 and its use has spread at one of the highest rates in Asia.

Access for young people to social media is helping to create a more democratic and participatory form of government, argues Maham Khan, a 21-year-old student of international relations at the Quaid-i-Azam University in Islamabad.

She references protests in Cairo in 2011 which were organized via social media and eventually unseated the then-president Hosni Mubarak. “Basically the youth is actually using social media just like in Egypt, to bring about slow social revolution,” she says.

But who they will vote for is hard to predict, with vast socioeconomic, religious and ideological differences between this huge population — though jobs and education are among their most unifying demands.

Polls still broadly indicate youth support for PTI and Khan’s populist, reformist agenda, though the shine may have gone off the sportsman somewhat — one of the viral videos shows him being whisked away by aides as a similar crowd challenges him in Karachi.

Nevertheless, most students who spoke to AFP expressed hope for change after decades of corrupt political dynasties, and Khan — despite widespread claims he is being backed by the powerful military as they seek a pliant government — represents the best chance of that.

“As a first-time voter myself… I’m very excited and I want to be a part of this process through which my vote can bring change,” 23-year-old Rafey Khan Jaboon told AFP.

Why is Khwaja Saad Rafique applying for protective bail?