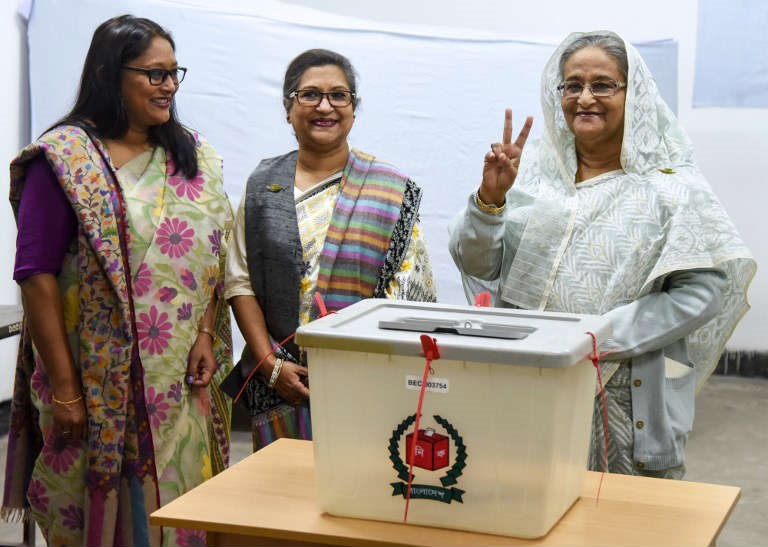 Bangladesh Prime Minister Sheikh Hasina got a landslide win in a general election Sunday that was marred by opposition claims of vote-rigging and violence between rival supporters that killed at least 17 people. Hasina’s ruling Awami League party easily crossed the 151 seats required to form a majority government, according to local TV station Channel 24, which is compiling results from around the country.

As midnight approached, the Awami League and its allies had won 191 seats — some by tens of thousands of votes — while the opposition coalition had only five, the channel said. The alliance running against Hasina, led by the main opposition Bangladesh National Party, branded the vote “farcical” and urged the country’s election commission to void the results.

Hasina did not immediately respond to the accusations but said in the run-up to the vote that it would be free and fair.

“We are demanding that a fresh election is held under a neutral government as early as possible,” Kamal Hossain, who heads the coalition, told reporters. Deadly violence and bitter rivalry that marred the election campaign spilled over into voting day, even as authorities imposed tight security with 600,000 troops, police and other security forces deployed across the country.

Thirteen people were killed in clashes between Awami League and BNP supporters, police said, while three men were shot by police who said they were protecting polling booths. An auxiliary police member was also killed by armed opposition activists, according to officials.

Hasina, 71, has been lauded for boosting economic growth in the poor South Asian nation during her decade in power and for welcoming Rohingya refugees fleeing a military crackdown in neighbouring Myanmar. But critics accuse her of authoritarianism and crippling the opposition — including arch-rival and BNP leader Khaleda Zia who is serving 17 years in prison on graft charges — to cling on to power.

The BNP-led opposition alliance on Sunday accused Hasina’s party of using stuffed ballot boxes and other illegal means to fix the result, which was to be officially announced by the election commission on Monday. BNP spokesman Syed Moazzem Hossain Alal told reporters there were “irregularities” in 221 of the 300 seats contested.

“Voters are not allowed to enter booths. Especially women voters are being forced to vote for the boat,” Alal said, referring to the Awami League symbol.

Bangladesh election commission spokesman S.M. Asaduzzaman told AFP the body had “received a few allegations of irregularities” and was investigating. Hasina did not immediately respond to the accusations but said in the run-up to the vote that it would be free and fair.

Thirteen people were killed in clashes between Awami League and BNP supporters, police said, while three men were shot by police who said they were protecting polling booths.

Voting in the capital Dhaka was largely peaceful as convoys of soldiers and paramilitary forces were on the streets where most traffic was banned. However, voters in provincial areas reported intimidation. Atiar Rahman said he was beaten by ruling party activists in the central district of Narayanganj.

“They told me not to bother, ‘We’ll cast your vote on your behalf’,” he told AFP. The opposition said the unrest was stirred up to deter voters, and presiding officers reported a low turnout across the country.

Sunday’s deaths brought to 21 the official police toll for election violence since the ballot was announced on November 8. Police said they acted “in self-defence” when they fired on opposition supporters who stormed a polling booth, killing one. A man was also shot by police after he tried to steal a ballot box.

Experts say a Hasina victory would be sullied by accusations that she hamstrung opponents. The opposition claims more than 15,000 of its activists were detained during the campaign, crushing its ability to mobilise support.

Human Rights Watch and other international groups said the crackdown created a climate of fear which could prevent opposition supporters from casting ballots.

Seventeen opposition candidates were arrested over what they claim are trumped-up charges while another 17 were disqualified from running by courts, which Hasina’s opponents say are government controlled. Human Rights Watch and other international groups said the crackdown created a climate of fear which could prevent opposition supporters from casting ballots.

The United States raised concerns about the credibility of the election while the United Nations called for greater efforts to make the vote fair. The leadership of Bangladesh has alternated between Hasina and Zia, allies-turned-foes, over the last three decades.

Hasina, daughter of Bangladesh’s first president Sheikh Mujibur Rahman, was gifted victory in the 2014 election when the BNP boycotted the vote claiming it was not free and fair. Rights groups have since accused her administration of stifling freedom of speech by toughening a draconian anti-press law and the enforced disappearance of dissenters.

Hasina rejects accusations of authoritarianism but analysts say she feared young voters would support the BNP. Her government was criticised this year for its heavy handling of weeks of major student protests that brought Dhaka to a standstill.