Battling it out at the UN: Potholes overshadow US-Iran confrontation – James M. Dorsey 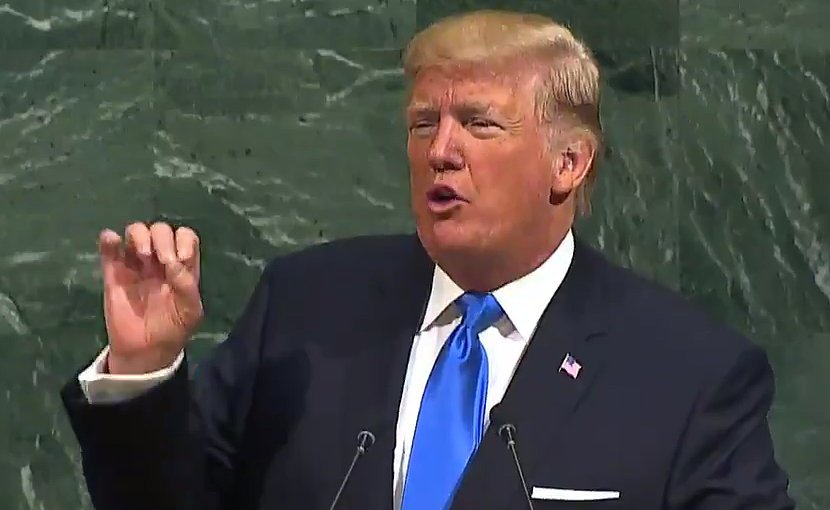 It’s easy to dismiss Iranian denunciations of the United States and its Middle Eastern allies as part of the Islamic republic’s long-standing rhetoric. The rhetoric makes it equally easy to understand American distrust. But as President J. Trump and Hassan Rouhani, his Iranian counterpart, gear up for two days of diplomatic sabre rattling at the United Nations in advance of next month’s imposition of the second round of harsh US sanctions, both men risk fuelling a conflict that could escalate out of hand.

Both are scheduled to address the UN general assembly on Tuesday and Mr. Trump is slated to chair a meeting on Wednesday of the Security Council expected to focus on Iran. Adding to the likely drama at the UN, European Union foreign policy chief Federica Mogherini, speaking alongside Iranian Foreign Minister Mohammad Javad Zarif, snubbed Mr. Trump, by announcing the creation of a payment system that would allow oil companies and businesses to continue trading with Iran despite US sanctions.

Responses by the US and its Gulf allies as well as a series of statements by militant Iranian Arab groups, including the Ahvaz Resistance Movement, suspected of being responsible for this weekend’s attack, have only deepened Iranian distrust.

The risk of escalation is enhanced by the fact that Messrs. Trump and Rouhani are sending mixed messages. Mr. Trump’s administration insists that its confrontational approach is designed to alter Iranian behaviour and curb its policies, not topple its regime. Yet, the administration stepped up its engagement with exile groups associated with the Mujahedeen-e-Khalq, a controversial Saudi-backed organization that calls for the violent overthrow of the government in Tehran and enjoys support among current and former Western officials, as Messrs. Trump and Rouhani battle it out at the UN.

John Bolton, who has repeatedly advocated regime change before becoming Mr. Trump’s national security advisor, is scheduled to give a keynote address at the United Against Nuclear Iran’s (UANI) annual summit during the UN assembly. So is Secretary of State Mike Pompeo, another hardliner on Iran. Mr. Pompeo and Mr, Bolton, who has spoken in the past at events related to the Mujahedeen, had so far since coming to office refrained from addressing gatherings associated with opposition groups.

Read more: US-Iran ties: Has the US kicked the hornet’s nest?

The administration left that to Mr. Trump’s personal lawyer, Rudolph Giuliani, who last weekend told the Iran Uprising Summit organized by the Organization of Iranian-American Communities, a Washington-based group associated with the Mujahedeen and attended by the exile’s leader, Maryam Rajavi, that the US. sanctions were causing economic pain and could lead to a “successful revolution” in Iran. “I don’t know when we’re going to overthrow them. It could be in a few days, months, a couple of years.

But it’s going to happen,” Mr. Giuliani, said speaking on the day of an attack on a military march in the southern Iranian city of Ahvaz that killed 25 people and wounded at least 70 others. Messrs. Bolton, Pompeo and Giuliani’s hardline stems from US suspicions rooted in anti-American and anti-Western attitudes that are grafted in the Islamic republic’s DNA and produced the 444-day occupation in 1979 of the US Embassy in Tehran. They are reinforced by the humiliation of a failed US military operation to rescue 66 Americans held hostages during the occupation.

Yadollah Javani, the deputy commander of Iran’s Revolutionary Guard Corps, the target of the attack, vowed revenge for what he termed years of conspiracies against the Iranian revolution by its enemies.

Iranian rhetoric; bombastic threats against Israel; denial of the Holocaust, support for anti-American insurgents in Iraq, the brutal regime of Syrian president Bashar al-Assad, Hezbollah in Lebanon, Houthi rebels in Yemen and Hamas in the Gaza Strip; propagation of religiously inspired republican government as an alternative to conservative monarchy in the Gulf; and degrees of duplicity regarding its nuclear program, reaffirm America’s suspicion.

Iran’s seemingly mirror image of the United States traces its roots further back to the 1953 US-supported overthrow of the nationalist government of prime minister Mohammad Mossadegh and his replacement by Shah Mohammad Reza Pahlavi whom Washington staunchly supported till his fall in 1979. Iranian concerns were reinforced by American backing of Iraq in the 1980s Gulf war, US support for Kurdish and Baloch insurgents, the broad spectrum of support of former and serving US officials for the Mujahedeen-e-Khalq, unequivocal Saudi signals of support for ethnic strife as a strategy to destabilize Iran, and Mr. Trump’s withdrawal from the 2015 international agreement to curb Iran’s nuclear program despite confirmation of its adherence to the accord.

Read more: Iran talks aim to save nuclear deal after US pullout

Responses by the US and its Gulf allies as well as a series of statements by militant Iranian Arab groups, including the Ahvaz Resistance Movement, suspected of being responsible for this weekend’s attack, have only deepened Iranian distrust. Those statements included one by the Arab Liberation Movement for the Liberation of Ahwaz effusively praising Saudi Arabia on its national day that the kingdom celebrated a day after the attack. Yadollah Javani, the deputy commander of Iran’s Revolutionary Guard Corps, the target of the attack, vowed revenge for what he termed years of conspiracies against the Iranian revolution by its enemies.

Mr. Javani was referring to the past US attempts to destabilize Iran and a four-decade-long global Saudi campaign that included the backing of Iraq in the Gulf war during the 1980s and an estimated $100 billion investment in support of anti-Iranian, anti-Shiite ultra-conservative Sunni Muslim groups. All of this means that mounting hostility between the United States and Iran is muddied as much by fact as by perception – a combustible mix that is easily exploitable by parties on both sides of the divide seeking to raise the ante.

Can we take “advantage” of the coronavirus crisis?