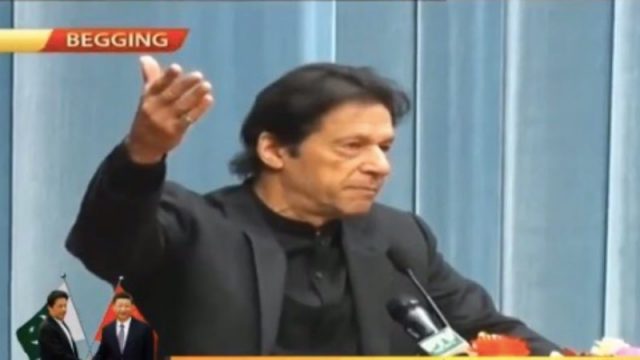 The state broadcast channel, Pakistan Television has apologized for the typographical error of running “Begging” instead of “Beijing” on the screen along with a U-turn sign during the speech of Prime Minister Khan in China.

Prime Minister Khan is on his first official visit to China along with his cabinet members including Finance Minister Asad Umar and Foreign Relations Minister, Shah Mehmood Qureshi.

Pakistan Television issued an apology from their official Twitter account, stating that investigation has initiated and ensured a strict action against the responsible.

Read more: Private Channels Banned: Welcome back to the World of PTV in…

“Today, during a live address of the Prime Minister during his ongoing visit to China, a typographical error took place, which remained on screen for 20 seconds and later removed. This incident is regrettable. Strict action has been initiated under rules against concerned officials”.

Today, during a live address of the Prime Minister during his ongoing visit to China, a typographical error took place, which remained on screen for 20 seconds & later removed. This incident is regrettable. Strict action has been initiated under rules against concerned officials pic.twitter.com/df2Z8oib5u

As per the initial reports, the inquiry has been initiated against five personnel.

The viral picture ensued debate amongst the netizens on Twitter. As commentators expressed varied views on the incident, a large group of social media users believed it was an intentional error to demean the Prime Minister Khan by the supporters of former premier Nawaz Sharif employed in Pakistan Television.

It was definitely done deliberately by someone in PTV. There's no way Beijing can be misspelled with 'Begging'. Extremely shameful attempt by whoever was responsible for this. https://t.co/R7KjETedt4 pic.twitter.com/0XSrF0TqTM

Later a netizen shared the photo of the typographical error of PTV during the speech of former Finance Minister Ishaq Dar when he was addressing the National Assembly. The PTV ran “evil” instead of “live”.

From Evil to Begging, Ptv’s Swag is unmatchable 🙌🏻 pic.twitter.com/Rz9CMpTNDy

This has raised questions on the narrative that calls it a deliberate mistake to demean the PM Khan. The followers of the Imran Khan have ruled the mistake as unintentional stating that the ‘begging’ word cannot be in any way assumed to be the misspelling of ‘Beijing’.