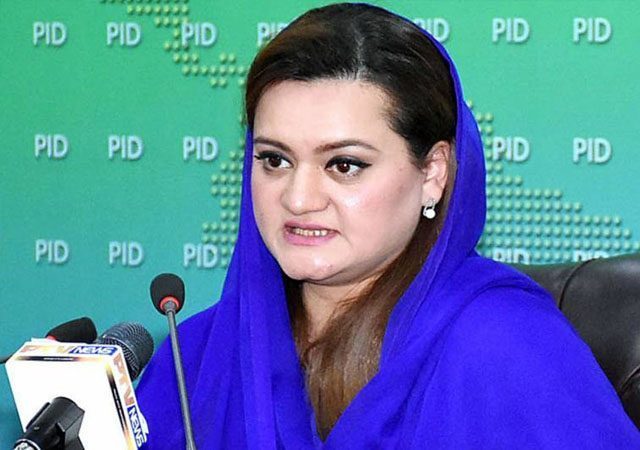 Marriyum Aurangzeb, Information Minister, has clarified on Friday that the Prime Minister (PM) Shahid Khaqan Abbasi had held ‘a media talk and not a news conference’ following the National Security Committee (NSC) meeting over the controversial remarks of Nawaz Sharif.

The PM’s statements following the NSC meeting were not aired live on any TV channel including the PTV. It was then reported that the data of PM’s speech was deleted from the PTV record while the whole process took place in the supervision of Information Minister Marriyum Aurangzeb.

“It was an unofficial meeting of the premier with the journalists invited at the PM House. It was not a press conference. Neither any camera was allowed nor the meeting was to be aired live on the television. I would have told the media if they had asked me. The news kept running on TV for three days and I also let it went as it is,” said Information Minister.

At the moment, PML-N leaders are not thinking about winning elections or contesting Imran Khan in Punjab or KPK rather the whole party is concerned about what Nawaz had said.

“This narrative (of the video being deleted) has been doing the circles for a few days,” Marriyum responded, adding, “If the video had been deleted or prevented from being aired, I would have made a statement on this. It was my decision to take the video off since the press talk was never meant to be aired publicly.”

Read more: Is Nawaz Sharif threatening to become the next Mujibur Rahman?

Nawaz Sharif while giving an interview to Daily Dawn had made some controversial, anti-Pakistan remarks regarding Mumbai attacks. He said: “Militant organizations are active. Call them non-state actors, should we allow them to cross the border and kill 150 people in Mumbai? Explain it to me. Why can’t we complete the trial?”

Nawaz’s statement helped Indian media generate a new narrative against Pakistan. His remarks were played up as an ‘admission’ by a thrice-elected prime minister of Pakistan’s complicity in the tragedy.

The NSC meeting, called by PM Abbasi on the ‘suggestion’ of the military’s senior command to address the matter, had deemed “the recent statement in the context of Mumbai attacks, as it appeared in the Daily Dawn of 12th May 2018 […] as incorrect and misleading.”

Nawaz Sharif who is surrounded by Pakistani liberals has decided to bring a ‘revolution’ in the country seemingly at the cost of the PML-N’s political survival.

It was further said that “the participants observed that it was very unfortunate that the opinion arising out of either misconceptions or grievances was being presented in disregard of concrete facts and realities. The participants unanimously rejected the allegations and condemned the fallacious assertions.”

PM Abbasi dispelled the impression that Nawaz had said that the Mumbai attacks had been planned in or supported by Pakistan.”Nawaz Sharif said that he neither said any such thing, nor can it be said on the basis of assumptions that planning for the Mumbai attacks was done in Pakistan,” said the PM.

PM blamed media both Pakistani and Indian for making an ‘issue’ without any substantial reason. In his view, Nawaz had said nothing like that. “Indian media is giving the issue a different hue, and we should not be a part of it,” he said. He also said that NSC had condemned the way media has misrepresented the statements of Nawaz Sharif and not the “Quaid” of the PML-N.

It was then reported that the data of PM’s speech was deleted from the PTV record while the whole process took place in the supervision of Information Minister Marriyum Aurangzeb.

Nawaz Sharif has declined to take his statement back, saying he would maintain his position. An angry Nawaz has also offered to form a National Commission to determine whether he is a patriot or a traitor. He maintained that whatever he had said was correct and based-upon facts. While addressing a rally, Nawaz has also threatened that ‘he could share more if he was asked to do so’.Despite clarification by PM Abbasi, Shehbaz Sharif and the PML-N Nawaz has neither ‘softened’ his narrative nor brought any alternation into it.

Read more: Bangladesh: Why Nawaz Sharif has a poor understanding of history

Nawaz Sharif has made some very controversial remarks just before general elections in Pakistan and pushed the PML-N into troubled waters. At the moment, PML-N leaders are not thinking about winning elections or contesting Imran Khan in Punjab or KPK rather the whole party is concerned about what Nawaz had said. Shehbaz Sharif has assured those who were uncomfortable within the party that the “Quaid” will soften his narrative.

Nawaz Sharif is not listening to what the premier is saying, what his party is up to, and what provincial and national lawmakers have to say after his anti-Pakistan remarks. Nawaz’s only focus is to cut the military establishment and judiciary in Pakistan to their size. He has, however, forgotten that when he was in opposition during 1990, he himself had an ‘understanding’ with the Generals and toppled the government of Benazir Bhutto.

Shehbaz Sharif stated that “whoever arranged the interview is the biggest enemy of Nawaz Sharif”. But Nawaz Sharif who is surrounded by Pakistani liberals has decided to bring a ‘revolution’ in the country seemingly at the cost of the PML-N’s political survival. Neither Imran Khan or nor Bilawal Bhutto are a challenge to PML-N’s existence, but former president of the party is likely to disintegrate it for his personal political interest.

The underdogs have made the Champions Trophy a real spectacle

Strict action will be taken against anti-state elements: Shehryar Afridi