Behind India-Israel alliance: The ideology and strategic philosophy 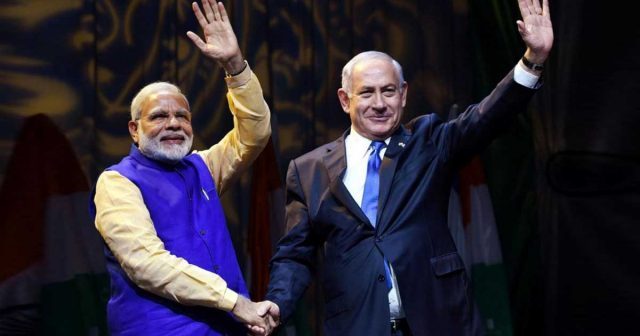 International Relations scholars and even geopolitical analysts would attempt to analyze the India-Israel strategic alignment in terms of defense and economy, but it is not a wise approach to study their relation when we know that both states are unique in their own setting. We not only need to analyze the relationship in the context of strategic partnership but also we need to apply Huntington’s theory of “The Clash of Civilizations and the Remaking of the World Order”. If we add this theory into our analysis then we open another gate of knowledge and see that India and Israel are the only states for their respective civilization in the contemporary world order.

Israel is the only state for the Jews so is India for Hindus. As claimed by the Jews, Jerusalem is the center of the Jewish Holy-land and as claimed by the Hindus, Banaras (Varanasi) is the center of Hindu Holy-land. It is not possible to be unconscious about a cordial philosophical linkage between the two civilizations that has made them natural allies in the last seven decades. Above all this common ideological linkage between Jews and Hindus is their mutually shared common conceptualization of the movement and end of history.

The similarities in between the strategic thought of these two civilizations are extraordinarily similar, which has resulted in an unparalleled strategic alignment. Despite the declaration of a majority of the world nation-states, being against India’s illegal occupation of Kashmir, Israel chose to side with India not only symbolically but also setting a unique precedent which stands apart in the culture of contemporary world order.

Why in a matter of a few decades a Jewish state in the Middle-east would become the most strategic ally of Hindu India in South Asia?

India: The Hindu Holy-Land and the End of History

Hinduism proclaims that history moves in cycles when a cycle is completed another one starts and replaces it. Through the prism of contemporary Hindu scholars as well as in the mainstream Hindu religious literature, the history has now reached at a point in time when one cycle is about to end and another one will begin to replace it. Therefore for the Hindu, this is the last age or an end of this cycle i.e. the end of history.

Hinduism is established on the belief of holy land. Bharat (Hindu holy land) not only includes the territory of contemporary India but also regional countries such as Bangladesh, Bhutan, Nepal, Tibet, Pakistan, Sri Lanka, Chinese Xinjiang, Japan, Korea, Mongolia, Tibet, Afghanistan, and Uzbekistan. Hinduism holds on tightly to a golden age in the ancient time where the gods and goddesses of Hinduism lived on earth and Hinduism ruled the world from Hindu holy land. Hindus cling to the belief that Hinduism has an absolute right to authority in the holy land of Bharat, and hence Hindus have an ideological and moral duty to make sure that the Hindu conception of the movement of history and truth triumph in this holy land of Bharat.

The Brahman-Hindu Conceptualization of Civilization

It is important to mention here that there are Hindus who reject this notion of the end of history with Brahman rule over the rest of human civilization, but they do not control the strategic decision making in Bharat.

This belief naturally spawns a system of authority over others which results in a perpetual inequality in the society. If we draw a diagram of this scheme or matrix it would look like a pyramid. This is the reason why every polytheistic religion or civilization from Mayans to Pharaohs and from Pharaohs to Hinduism in the past erected pyramids as their symbol of pride.

Thus in the view of Hindu civilization which is ruled by the Brahman-Hindu, history will not end without a Brahman-ruled Holy-land of Bharat. If we play close attention to the domestic affairs of India we see a tide of Hindu Nationalism and the galvanization of forces who are aiming to accomplish this religious obligation. The current geopolitical scenario of South Asia and the Indian hegemonic ambitions in the region is a proof that they are preparing for Dharamyudh (A holy war for the sake of Brahman-Hindu rule over the holy-land of Bharat).

Read more: Israeli PM says he does not consider Pakistan an enemy

It is important to mention here that there are Hindus who reject this notion of the end of history with Brahman rule over the rest of human civilization, but they do not control the strategic decision making in Bharat. Hindu-nationalist parties and organizations such as Hindu Mahasabha, Kakbhusundi Revolutionary Forum (KRF), Rashtriya Swayamsevak Sangh (RSS), Vishwa Hindu Parishad, Hindu Janajagruti Samiti, and Bharatiya Janata Party have already taken over the major power centers in India.

Israel: Jewish Holy-Land and the End of History

The Brahman Hindu and Judaic conception of the end of history is remarkably similar. Both the Jew and the Brahman Hindu consider themselves as the elite of human civilization and consider all non-Hindus or non-Jews to have been created with a lower status. Therefore, both aim to establish geopolitical and geo-strategic systems of superiority which will ensure that the elite of human civilization themselves would dominate over the rest of mankind.

Both of them share the memory of a golden age when their religious, geopolitical and geo-economic institutions spread and established control and influence over all others in ancient history. Both the Hindus and Jews believe in a holy land. Both believe that history cannot end without the establishment of their respective golden ages, where they will again rule the world around them from their respective holy lands.

India also had been misunderstood by major scholars around the world who consider it as a secular state. India in reality is not a secular state but a state working solely on the ideology of Hinduism.

According to the Jewish view of the beginning and end of history, History reached its climax in the golden age of Prophet David and Solomon (P.B.U.H) ruled the world from Holy land Israel. Around 2000 years ago Jews were expelled from the holy land after the golden age observed two periods of Jewish treachery of promise with God which resulted in two ages of Jewish historical disintegration. The first was the Babylonian exile and the second which started shortly after when Jews dismissed the message of Jesus (peace be upon him).

Their claim is referred from the Bible which declares that the holy-land comprises of “from the river of Nile in Egypt to the river of the Euphrates in Iraq”. Which means the Jewish conception of truth and history will not end until they fully reclaim the territory which today comprises Sinai, Lebanon, Syria, Iraq, and Northern Saudi Arabia.

The Jews believe their golden age is around the corner but in order to pave the way for this Jewish golden age firstly, they must return to their holy land which they had already done during the inter-war period. Secondly, they must reclaim holy Israel as their Jewish homeland which they had already done in 1948. Thirdly, the state of Israel must expand its territory from river Nile to river Euphrates (Greater Israel) and the temple of Solomon must be rebuilt replacing Masjid Al-Aqsa.

Fourthly, Jewish holy land the State of Israel would have to become the ruling state in the world around it. Lastly, to constitute the end of history for Judaism, Jewish scriptures proclaim that a Jew will arrive and declare him as the Messiah in the last age and with that Jewish recognition of him as the Messiah would declare their end of history.

Conclusion: The Threat Matrix of India-Israel Alliance and its Strategic Philosophy

But the question arises how they are going to put an effort for the restoration of their respective golden ages when we know that both are part of the modern secular nation-state system? Answer: In order to pave the way for their golden age, secular nationalism must replace by religious nationalism sidelining all the consequences for the politics of the state.

According to Indian strategic thought, the holy land of Bharat is the only home for Hindus. Thus, the reality of India was not the bi-product of British decolonization or the Muslim effort for a separate homeland in the sub-continent. The reality of India is Hinduism and its quest for the truth which will culminate in the absorption of former Indian territories (Akhand Bharat) and will result in an eternal Hindu rule in the world order.

Both India and Israel, both civilizations with their only states in the world order have found a common obstacle in the quest for their golden age. And that enemy is Islam and its message which contradicts with the claims of Hindu and Jewish view of the movement and the end history. Islamic civilization which is currently divided into nation-state system comprises of states surrounding Israel in the Middle East and states surrounding India in South Asia such as Pakistan, Bangladesh, and Maldives. Hence, the establishment of an alliance between the Zionists who rule Israel today and the Brahman Hindu who rule India today is inevitable and has resulted in a nexus which is unbreakable in both war and peace.

What is the future of India Sri Lanka relations?