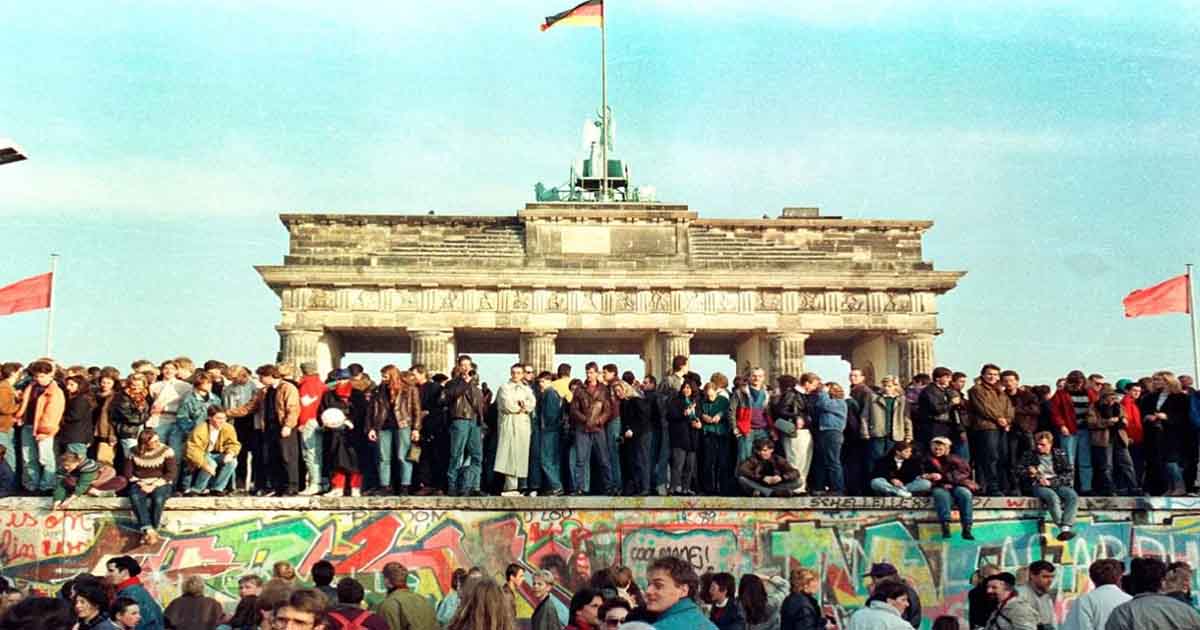 US Secretary of State Mike Pompeo and incoming EU chief Ursula von der Leyen issued stark warnings Friday that the West faces new challenges from Russia and China, on the eve of the 30th anniversary of the Berlin Wall’s fall.

With the West facing a slew of geopolitical challenges, he said the bulwark of the bloc’s defence alliance, the 70-year-old NATO, also “runs the risk that it will become obsolete” if leaders failed to tackle new challenges.

Dismissing the debate around Macron’s comments as “kerfuffle,” Pompeo acknowledged that “NATO needs to grow and change, it needs to confront the realities of today and the challenges today.”

Read more: What was the Berlin Wall? In five simple points

These threats include those posed by governments like China, Russia and Iran, Pompeo said, speaking just a few metres (yards) away from where the Wall ran past the German capital’s world famous Brandenburg Gate.

In a renewed attack against Beijing, Pompeo said the “Chinese Communist Party uses tactics and methods to suppress its own people that would be horrifyingly familiar to former East Germans”.

Chinese spokesman: US Secretary of State Pompeo made more critical comments about China's treatment of Uighur people. There are no so-called "internment camps" in Xinjiang. Under the pretext of human rights, US again smeared China's Xinjiang policy. China firmly opposes it.1/4 pic.twitter.com/c8P3q8YQj6

The United States and its allies should “defend what was so hard-won… in 1989” and “recognise we are in a competition of values with unfree nations,” he added.

Issuing a similar message, von der Leyen said 30 years after the epochal event that was thought to usher in the unstoppable train of liberal democracy, “today, we have to admit that our complacency was naive.”

Russia is “using violence to shift established borders in Europe, and is trying to fill every vacuum that the US has left behind.”

Read more: NATO allies may split in aftermath of US sanctions on Turkey

And hopes that China would develop closer to the Western model have not been fulfilled, the former German defence minister said.

In the face of such challenges, von der Leyen said Europe needs to bulk up against the world’s biggest players.

“Soft power is no longer enough today, if we Europeans want to assert ourselves in the world,” she said, adding that “Europe must also learn the ‘language of power’.”

The strength of the idea of Europe remains intact. There is no challenge that Europe’s strengths cannot overcome. #StateofEurope2019 pic.twitter.com/pYKdUlqp5o

This include “building our own muscles, on where we’ve for a long time been able to rely on others — in security policies.”

Faced with a mercurial US President Donald Trump, European leaders including Merkel have in the last years intensified their calls for the bloc to ensure that it stand on its own feet.

On a whirlwind two-day tour of Germany where he revisited the site of his Cold War military service on the former Iron Curtain border and met Merkel and key members of her cabinet, Pompeo looked to shore up transatlantic relations.

Read more: Global protests: Russia and China risk ending up on the wrong side of history

But he did not hesitate to name longstanding US-EU differences that have shifted into the spotlight under Trump’s tenure.

Merkel has repeatedly said the pipeline is a purely private business concern.

My Geopolitical Outlook for 2019 has been correct. I have already pointed to the emerging cracks within the French-German ‚axis‘ due to Nord Stream 2.0, relations with Russia, and now obviously relations with US/NATO. Brexit will also add more pressure. #realpolitik #security https://t.co/iON9seIEyL

While Huawei is a world leader in the technology, the US and others including Germany’s own security services have warned that it is close to Beijing.

But wary of a potential falling-out with China — Germany’s biggest trade partner — Berlin last month said only that there would be “high standards” for security in the new network.

How much will Steel Mill employees get after ‘golden handshake’ with government?