Bhagat Singh is not a terrorist! 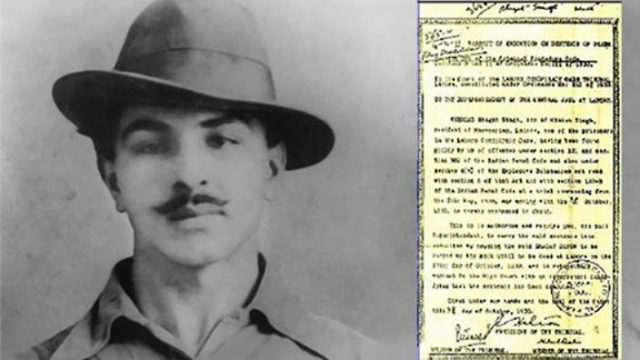 The exhibition titled ‘Trials, Tribulations and Lahore Conspiracy Case’ displayed the revolutionary literature penned down by Bhagat Singh during his struggles against British Raj till his death on 23rd May 1931.

Bhagat Singh was hanged at the age of 23 in Lahore along with his companions Chandrashekar Azad, Rajguru and Sukhdev after he was declared a terrorist in ‘The Lahore Conspiracy Case’. His death inspired millions to take up the cause of freedom movement.

Bhagat Singh along with his companions killed Superintendent of Police, John Saunders to avenge the death of their revolutionary leader Lala Rajpat Rai, who died at the hands of British during a protest against Simon Commission.

Director Punjab Archives, Abbas Chughtai in his speech narrated the incident and its consequences in the aftermath that led to Bhagat Singh being declared terrorist by British rulers.

“In a case of mistaken identity, Bhagat Singh with the help of Rajguru, Sukhdev, and Chandrashekar Azad, shot Superintendent of Police, John Saunders, about eight times, managing to escape from the scene into hiding. A year later in April 1929, he and his associate, Batukeshwar Dutt, threw bombs and showered leaflets in the Delhi Legislative Assembly, shouting their slogan ‘Inquilab Zindabad’. Singh did not resist his arrest, and it was during interrogation at this very point that the British came to know about his involvement in the death of John Saunders five months earlier, in the November of 1928,” he said.

Read more: Will Jagmeet Singh be Canada’s next Prime Minister?

Additional Chief Secretary, Omer Rasul also praised Bhagat Singh’ sacrifice for independence and declared him a “national hero’. Rasul stressed on his notable service to Pakistan and India in his speech.

“Singh was not a ‘terrorist’. He threw bombs in the New Delhi Assembly, where nobody was killed or hurt. What he said was only this: if the people have turned deaf, you need a bang to get yourself heard. This was his message to the people of India in the freedom struggle against the British,” said Rasul.

Previous articleWrath for separatists in Spain but sympathy for Baloch insurgents from Pakistan: Europe’s Double Standards?
Next articleHas Kim finally decided to give up nuclear ambitions?

25 September 2021
Previous articleWrath for separatists in Spain but sympathy for Baloch insurgents from Pakistan: Europe’s Double Standards?
Next articleHas Kim finally decided to give up nuclear ambitions?