Bilawal’s Participation in Azadi March to be Revealed Last-Minute

Reports and sources within the PPP reveal that the party has not taken a final decision with regards to Bilawal Bhutto Zardari’s participation in the public meeting of the Azadi March. He is likely to address the Azadi March participants if other opposition leaders, including PML-N President Shahbaz Sharif, decide to make an appearance. 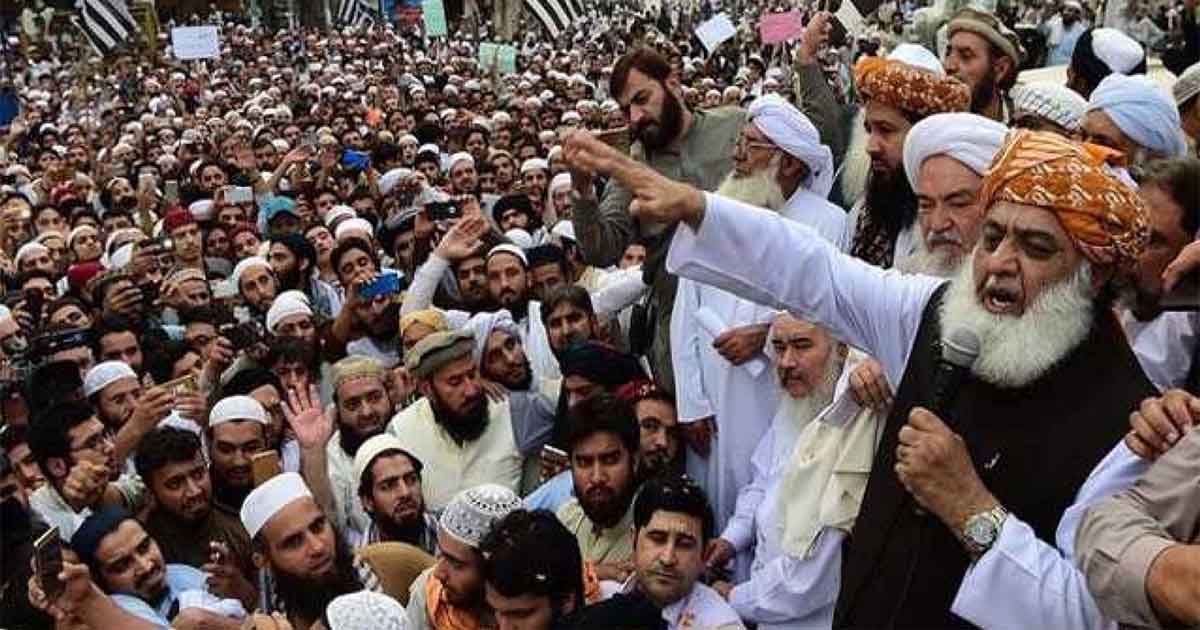 Maulana Fazlur Rehman, JUI-F Chief’s Azadi March has hit the road from Karachi, while the participation of the Pakistan People’s Party (PPP) Chairman Bilawal Bhutto Zardari is still awaited at the widely publicized public meeting of the opposition in Islamabad.

Meanwhile, Pakistan Muslim League-Nawaz (PML-N) President Shehbaz Sharif, among other senior opposition leaders, have announced their decision to address the participants gathered at the public meeting organized at the Azadi March.

Sources in the PPP, as circulating on media, reveal that the party leaders had agreed that a final decision regarding Bilawal Bhutto Zardari’s participation in the opposition’s public meeting will be revealed last minute. The party will examine and closely monitor the ongoing situation and events that would occur at the beginning of the Azadi March on Sunday.

Meanwhile, the government’s decision to take action against two senior JUI-F leaders have already disrupted the agreements signed between the JUI-F and the local administration with regards to the new venue of the public meeting. Opposition leaders have accused the Pakistan Tehreek-e-Insaf (PTI)-led government of violating the agreement after the decisions to annul the citizenship of former JUI-F Hafiz Hamdullah and arresting Mufti Kifayatullah.

Senior political analyst and columnist, Khawar Ghumman, observed that the Premier must stay focused on his resolve to eliminate the scourge of corruption.

Senator Mustafa Nawaz Khokhar, official spokesperson for the PPP Chairman revealed to a media outlet that the party has not yet reached a decision with regards to the participation of Bilawal Bhutto Zardari with regards to the public meeting. Khokhar added that the PPP had announced its own schedule for the party’s public engagements and meetings.

He said that the PPP Chairman is scheduled to visit multiple cities across South Punjab from November 1 to 9. Khokhar said that the PPP is still not clear about the overall schedule of the JUI-F organized public meeting, whether it will be held on October 31 or November 1.

Khokhar said, “If the public meeting occurs on November 1, then it will concur with the Pakistan People’s Party (PPP) public engagement in Rahim Yar Khan.” He said that Bilawal Bhutto Zardari is scheduled to address public gatherings in Uch Sharif in Bahawalpur on November 4, and in Muzaffargarh on November 8.

He added that the PPP Chairman is scheduled to attend a meeting with members of the Multan Bar on November 6.

The PPP Senator said that so far, JUI-F Chief Maulana Fazlur Rehman did not extend a formal invitation to Bilawal Bhutto Zardari to address the public meeting of the Azadi March.

Media reports reveal that Farhatullah Babar, senior PPP leader and member of the opposition’s joint Rehbar Committee, said that the PPP leadership agreed that if the leadership of other political parties participates in the public meeting scheduled for the Azadi March, then Bilawal will also attend it.

Khokhar added that the PPP had announced its own schedule for the party’s public engagements and meetings.

Babar revealed that as per his knowledge, Asfandyar Wali, Chief of the Awami National Party, and Hasil Bizenjo, President National Party, have also announced their participation in the Azadi March. However, he said that the PML-N leadership has not specified whether Shehbaz Sharif, the PML-N President will attend the public address or not.

He said that if the PML-N President decides to address the public meeting, then it is highly likely that Bilawal Bhutto Zardari will also be present. Earlier, Farhatullah Babar had said that the opposition leadership had agreed that members of the Rehbar Committee will attend the public meeting to represent their political parties.

Zahid Khan, a leader of the ANP, said that Asfandyar Wali will lead the rally of his party workers and leaders from Mardan.

Read more: Azadi March shall be carried out at any cost, says Maulana

Jan Achakzai, notable political analyst and Chairman of the Center for Geo-Politics and Balochistan, observed that the opposition’s unity in the JUI-F’s Azadi March is an “opportunistic convergence of anti-army politics.”

Taking to Twitter, the Baloch analyst said, “Disparaged by liberals/leftists of Pakistan, Maulana is now the torchbearer of democracy, pluralism & vote supremacy.” He continued, “Ironically, they want to achieve lofty ideals via foul means including use of “rightwing extremist voices”. But it is opportunistic convergence of anti-Army politics.”

Achakzai, in another tweet, lamented that it was “unfortunate” that the PPP, PML-N and other opposition parties failed to stand with the government to express national solidarity on Kashmir’s Black Day. He observed that they are more focused on saving “corrupt party leadership.”

He said, “The politics now is a new form of subversion to destabilize Pakistan. Time to deconstruct this style of politicking providing shoulder 2 subversive forces.”

—Unfortunate PPP, PML-N & rest, instead of national sodiarity on #Kashmir Day, are out 2 save 4 corrupt party leadership.

—The politics now is a new form of subversion 2 destabilise Pakistan.

Senior political analyst and columnist, Khawar Ghumman, observed that the Premier must stay focused on his resolve to eliminate the scourge of corruption.

Ghumman said, “The only way forward for Prime Minister Imran Khan is to stand firm on his anti-corruption stand and not let the opportunists and other forces currently surrounding him pollute basic ideals democracy. Otherwise at the end, he would be the only loser.”

The only way forward for Prime Minister Imran Khan is to stand firm on his anti corruption stand and not let the opportunists and other forces currently surrounding him pollute basic ideals democracy. Otherwise at the end, he would be the only loser.

Pakistan’s Solution To Everything Out Of Line: Call The Army