Biological Warfare: The most lethal way of fighting

With Coronavirus spreading across the globe, controversy theories fired up. One of the most feisty is "Bio Warfare". An Israeli analyst claims that the Wuhan Virology lab created a virus and couldn't control it leaking it into the atmosphere. There are several examples in the history of the deadly nature of biowarfare. Is coronavirus really a product of malpractice? 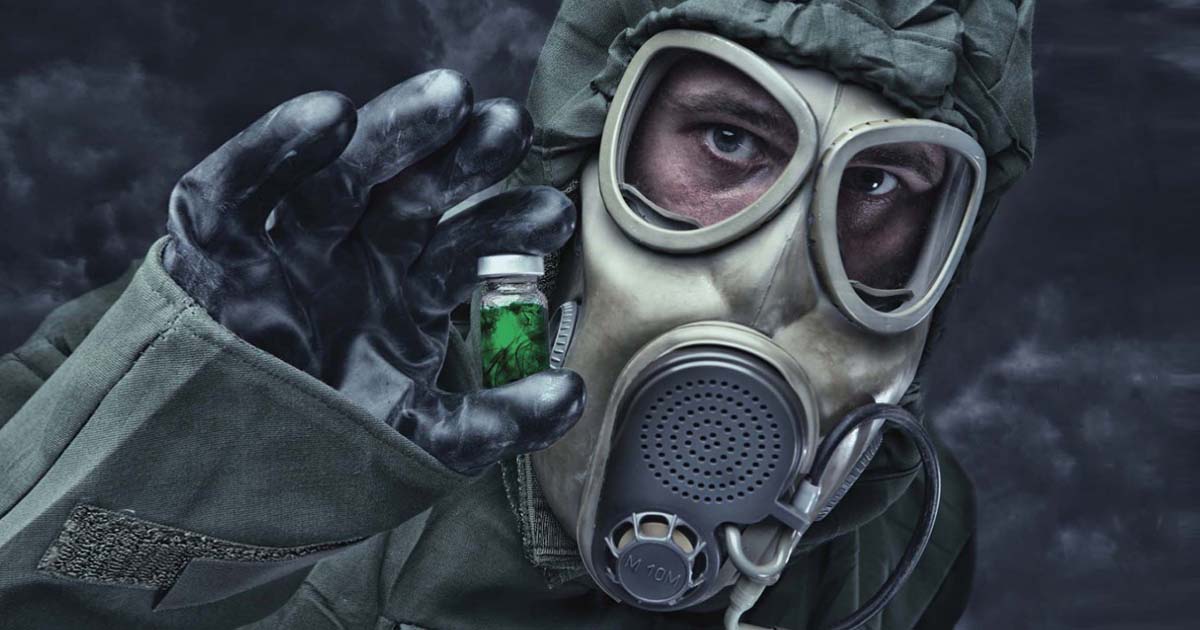 Coronavirus has sent chills down the spine of the populace across the globe. It is the most lethal forum of virus which, despite untiring efforts of Chinese biological scientists, still remains an incurable epidemic. On the other hand, Conspiracy theorists have now started advancing their self-concocted theories regarding the germination and spread of this devastating pandemic.

One of such theories is that coronavirus is not a natural phenomenon but a human-made biological weapon, incubated and choreographed by the adversaries of china to emaciate her military and economic muscle. It may be a conspiracy theory nonetheless the veracity of this argument needs to be ascertained and should not, therefore, be repudiated out rightly. However, it is an axiomatic fact that bio-weapons have been used extensively in wars in order to subject the rival forces to a humongous human catastrophe.

Biological warfare also known as “germ warfare,” involve the use of toxins or infectious agents that are biological in origin. This includes bacteria, viruses, and fungi. These biological agents are used to incapacitate or kill humans, animals, or plants as part of a war endeavor.

Allegations were also made during the American Civil War by both sides, but especially against the Confederate Army, of the attempted use of smallpox to cause disease among enemy forces

In fact, biological warfare is the use of non-human life to disrupt — or end — human life. Because living organisms can be unpredictable and incredibly resilient, these are difficult to control, potentially devastating on a global scale, and prohibited globally under numerous treaties.

The war chronicles is replete with myriad events in which bio-weapons were used to debilitate the adverse army. The use of biological agents is as old as hills. Attempts to use biological warfare agents date back to antiquity. Its maiden manifestation was surfaced when Scythian archers infected their arrows by dipping them in decomposing bodies or in blood mixed with manure as far back as 400 BC.

Persian, Greek, and Roman literature from 300 BC quotes examples of dead animals, employed to contaminate wells and other sources of water. Further, In the Battle of Eurymedon in 190 BC, Hannibal won a naval victory over King Eumenes II of Pergamon by firing earthen vessels full of venomous snakes into the enemy ships.

During the battle of Tortona in the 12th century AD, Barbarossa used the bodies of dead and decomposing soldiers to poison wells. To add, during the siege of Kaffa in the 14th century AD, the assailant Tatar contingent hurled plague-infected corpses into the city in an attempt to cause an epidemic within enemy forces. This lethal exercise was repeated in 1710, when the Russians, besieging Swedish forces at Reval in Estonia, catapulted dead bodies of people infected with plague.

Additionally, During the French and Indian War in the 18th century AD, British forces under the patronage and command of Sir Jeffrey Amherst provided the Native Americans with blankets that had been used by smallpox victims in a bid to spread the disease.

Furthermore, Allegations were also made during the American Civil War by both sides, but especially against the Confederate Army, of the attempted use of smallpox to cause disease among enemy forces.

In 1900, Biological warfare became more sophisticated and advance. During World War I, the German Army developed anthrax, glanders, cholera, and a wheat fungus specifically designed to be used as biological weapons. They allegedly spread plague in St. Petersburg, Russia, infected mules with glanders in Mesopotamia, and attempted to do the same with the horses of the French Cavalry.

However, in order to discourage the practice of using biological agents in war, the Geneva Protocol of 1925 was signed by 108 nations. This was the first multilateral agreement that extended prohibition of chemical agents to biological agents. Unfortunately, no method for verification of compliance was addressed. Therefore, spread of the use biological agents in the wars could not be halted.

Hence, during World War II, Japanese forces operated a secret biological warfare research facility (Unit 731) in Manchuria that carried out human experiments on prisoners. They exposed more than 3,000 victims to plague, anthrax, syphilis, and other agents in an attempt to develop and observe the disease. Some victims were executed or died of their infections. Autopsies were also performed for greater understanding of the effects of these viruses on the human body.

Read more: Clash between Russia and the USA over biological weapons in Central Asia?

In 1942, the United States formed the War Research Service. Anthrax and botulinum toxin initially were investigated for their use in wars as weapons. Sufficient quantities of botulinum toxin and anthrax were stockpiled by June 1944 to allow unlimited retaliation if the German forces first used biological agents. The British also tested anthrax bombs on Gruinard Island off the northwest coast of Scotland in 1942 and 1943 and then prepared and stockpiled anthrax-laced cattle cakes for the same reason.

The United States continued research on various offensive biological weapons during the 1950s and 1960s. From 1951-1954, harmless organisms were released off both coasts of the United States to demonstrate the vulnerability of American cities to biological attacks. This weakness was tested again in 1966 when a test substance was released in the New York City subway system.

Besides, during the Vietnam War, Viet Cong guerrillas used needle-sharp punji sticks dipped in feces to cause severe infections after an enemy soldier had been stabbed.

In the light of preceding facts and figures, it becomes quite evident that biological warfare is more lethal than conventional war for once it started becomes, unrestrained, undetectable and all-pervasive

Moreover, in 1979, an accidental release of anthrax from a weapons facility in Sverdlovsk, USSR, killed at least 66 people. The Russian government claimed these deaths were due to infected meat and maintained this position until 1992, when Russian President Boris Yeltsin finally admitted to the accident.

In September and October of 1984, 751 people were intentionally infected with salmonella, an agent that causes food poisoning, when followers of the Bhagwan Shree Rajneesh contaminated restaurant salad bars in Oregon.

Besides, following the Persian Gulf War, Iraq disclosed that it had bombs, Scud missiles, 122-mm rockets, and artillery shells armed with botulinum toxin, anthrax, and aflatoxin. They also had spray tanks fitted to aircraft that could distribute agents over a specific target.

In 1994, a Japanese sect of the Aum Shinrikyo cult attempted an aerosolized (sprayed into the air) release of anthrax from the tops of buildings in Tokyo and in 1995, two members of a Minnesota militia group were convicted of possession of ricin, which they had produced themselves for use in retaliation against local government officials.

Furthermore, in 2001, anthrax was delivered by mail to U.S. media and government offices. There were about five deaths as a result. Further, in December 2002, six terrorist suspects were arrested in Manchester, England; their apartment was serving as a “ricin laboratory.” Among them was a 27-year-old chemist who was producing the toxin.

Later, on Jan. 5, 2003, British police raided two residences around London and found traces of ricin, which led to an investigation of a possible Chechen separatist plan to attack the Russian embassy with the toxin. To add, On Feb. 3, 2004, three U.S. Senate office buildings were closed after the toxin ricin was found in a mailroom.

The time to act is now before disaster strikes. We should not have to wait for the biological equivalent of Hiroshima to rally our defenses

In the light of preceding facts and figures, it becomes quite evident that biological warfare is more lethal than conventional war for once it started becomes, unrestrained, undetectable and all-pervasive.

Inter alia, Biological warfare has also engendered the fear of bioterrorism. According to biological scientists and war affairs luminaries, non-state actors (terrorists) can also resort to the use of bio agents to further their interests since this type of weaponry is relatively cheaper as well as more devastating than conventional armaments.

While highlighting such scenario, a renowned American a professor of biological sciences and applied physics at Stanford remarks that Biological weapons are “the poor man’s atom bomb,”. If rogue politicians or terrorists were to get hold of the bio-weapons, “the consequences could be disastrous,” he warns.

He further adds that conventional biological agents — including anthrax, Ebola and typhus — plus an unknown number of genetically engineered organisms, if acquired by the terrorists, could unleash a colossal destruction in the world.

Block further contends that “the time to act is now before disaster strikes. We should not have to wait for the biological equivalent of Hiroshima to rally our defenses.”

To sum it up, coronavirus may or may not be bio-weapon but we must unite and raise voice against the use of bio-weapons in wars since it is the question of not only our survival but also of our posterity. Finally, let me quote famous lines of John F. Kennedy who once remarked “Mankind must put an end to war before war puts an end to mankind”.

Humanity in the face of an ecological apocalypse

Come in, Kim. Join the club

‘I think I have coronavirus’ – Follow these experts’ suggestions for treatment