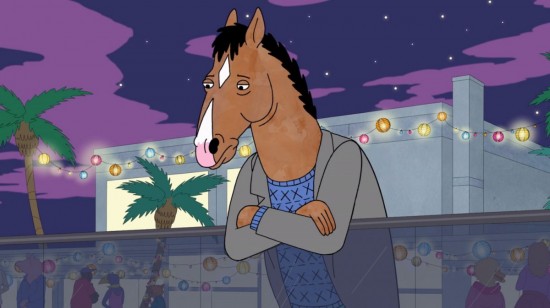 Finally gaining viewership in a wider audience, the animated Netflix series BoJack Horseman’s fourth season is set to come out this September. The show follows the life and (mis)adventures of BoJack Horseman, who, as the name suggest is a horse. In the show, BoJack is shown to be an actor who gained fame early on while working on a famous comedy show Horsin’ Around.

In the time setting the show takes place in, BoJack (voiced by Will Arnett) has finished Horsin’ Around and is now in his 50s with a big house in Hollywood, L.A. He lives a lavish lifestyle, and has not had to work for a very long time. BoJack has no family and is only accompanied by his friend Todd who lives in the house rent-free. In the early seasons, BoJack’s only friends are his biographer Diane, her boyfriend Mr. Peanutbutter, and his ex-girlfriend and current agent Princess Carolyn.

At a very surface level, the show can be dismissed as a depiction of Hollywood celebrity superficial lifestyles. However, the show is a whole lot more than that. It follows these characters and their attempts at grasping meaning and happiness in a world that provides them with little of it. The show is indeed a drama about existentialism and is depressingly hilarious. That’s not all, the creators have used the animated format in order to depict and provide overarching narratives that would be difficult to show with traditional methods.

“Most people are jerks already and giving a jerk a gun and telling them it’s ok to kill people doesn’t automatically make them a hero!” Bojack hates the troops

The most prominent theme of the show is the search for happiness, but it is not the only theme present. The social critique shown includes things like criticism of the hero-worshiping of soldiers due to excessive nationalism, criticism of the institution of the family when it persists with toxicity, the superficiality of Hollywood lifestyles, and a whole lot more.

” We’re not doomed. In the grand scheme of things, we’re just tiny specks that will one day be forgotten. So it doesn’t matter what we did in the past, or how we’ll be remembered. The only thing that matters is right now. This moment. This one spectacular moment we are sharing together.” BoJack

BoJack has all the material rewards he could ask for, but he still isn’t happy. He spends his days drinking and wasting away his life, which seems like a symptom of depression. BoJack is a complex character that reflects our yearning for acceptance and love from others. As the show progresses, he gets more desperate for this sort of love because he feels that by acceptance, he will finally be happy.

“Yeah, in October, but how come you never see a Halloween store in january? it’s an untapped market!” Todd’s business pitch

Todd (voiced by Aaron Paul) is another character who looks like he is shallow but then reveals himself to be on a similar quest for happiness. He desperately looks for hobbies and projects to get onto so that he wouldn’t have to face the meaninglessness of his life.

“The key to being happy isn’t a search for meaning. It’s to just keep yourself busy with unimportant nonsense, and eventually, you’ll be dead.” Mr. Peanutbutter

Mr. Peanutbutter is a hyper-optimist and understands that there is no meaning to be found and he is alright with that. He keeps himself busy and always looks for the best in every situation.

The essential conclusion of the show is that it is not an animation to appeal to younger people, rather it utilizes the animated format to convey a message that would otherwise not be as effective.