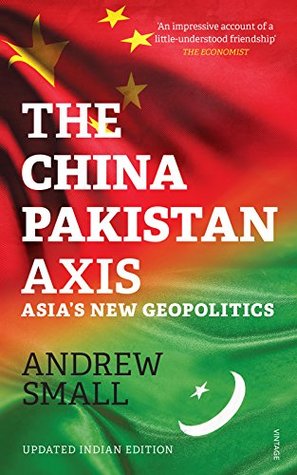 Andrew Small is a senior transatlantic fellow with the Asia program at the German Marshal Fund of the United States. He is an expert on all things related to China and foreign policy, especially China’s role in South Asia. His work has been published in Foreign Affairs, the New York Times, Foreign Policy. The China Pakistan Axis is his first book. Considering his background and experience, naturally there were great expectations from it. And the book does not disappoint.

Even though the relationship between ‘all weather allies’ China and Pakistan is known all over the world as a very tight and close one, surprisingly, there haven’t been a lot of decent books on this very special relationship. In fact, there are probably hardly any books at all, at least as far as the contemporary geopolitics is concerned. A google search for books on China-Pakistan gives you ten different links about Andrew Small’s book. This shows why this book had to be written. Even many Pakistanis and Chinese don’t understand the nuances within Pak-China ties and the challenges this relationship faces.

The book was released in early 2015. There haven’t been updated volumes as of yet. It is divided into seven chapters. It’s a relatively short and crisp read. Each chapter begins with a specific incident, turns in to a series of incidents from which the reader can get a sense of the point the author wants to drive home. There are many quotes by various personalities in each chapter which add spice to the story. Furthermore, each chapter ends at a note where the next chapter begins, leaving the reader wanting for more. I read one chapter daily and often ended up reading the first few pages of the next chapter, just to satisfy my curiosity.

At the same time, each chapter discusses a different issue as well. The first chapter begins at the start of the cold war while the last chapter ends at the US withdrawal from Afghanistan and what China and Pakistan hope to gain from it.

The various quotes by different personalities merits special mention. The book begins with the following: ‘The Pakistanis love China for what it can do for them, while the Chinese love Pakistanis despite what they do to themselves’. Immediately after this, the author discusses the Red Mosque fiasco. At another point, a senior Chinese official is quoted as saying ‘Pakistan is our Israel’.

Similarly, in the second chapter on nuclear politics, a chinese official is quoted thus: ‘As long as they need the bomb, they will lick your balls. As soon as they have the bomb, they will kick your balls’. To know who ‘they’ are in this quote, one has to read the book. The author uses these quotes to whip up a narrative. To understand the narrative, one needs to know the intended or likely audience. In Andrew Small’s case, that might be the US officials concerned with foreign policy.

These quotes add life to what otherwise might have been boring recitations of incidents and narration of past events. In addition to that, the author’s own writing style is very lively, crisp, blunt at times, discrete and insinuatory at others. Andrew Small writes in short, to the point sentences. While reading the book, I often lost track of time. There seems to be a sense of urgency in how each sentence and paragraph leads to the next one but at the same time, there is a measure of restraint and control over how much information actually is in the text.

Furthermore, each chapter ends at a note where the next chapter begins, leaving the reader wanting for more. I read one chapter daily and often ended up reading the first few pages of the next chapter, just to satisfy my curiosity.

There is chronological order in the book. Each chapter seems to be set in particular time frame. At the same time, each chapter discusses a different issue as well. The first chapter begins at the start of the cold war while the last chapter ends at the US withdrawal from Afghanistan and what China and Pakistan hope to gain from it. In between, everything from the Taliban to India is covered in depth and in sequence. The reader may pick and choose which topic i.e. chapter to read first but it is advisable to go with the chronological order. There is continuity between the end of each chapter and the beginning of the next.

Read more: Book review: From Kargil to the Coup

The crux of the book may be summarized in the following words: Pakistan, at various time, has wanted China to do more than it actually does for Pakistan while Beijing hopes Islamabad can begin to take care of internal matters on its own. Of course, there is a lot more to it. I was surprised to know that Ayub Khan once threatened China with retaliation for repeated Chinese intrusions into Pakistani territory during the early 1950s. This, and a lot more, fills the pages of this delightful book.

One is hard pressed to find a better book on Pak-China relations.

Arguments aren’t bad for you, if you know how to disagree