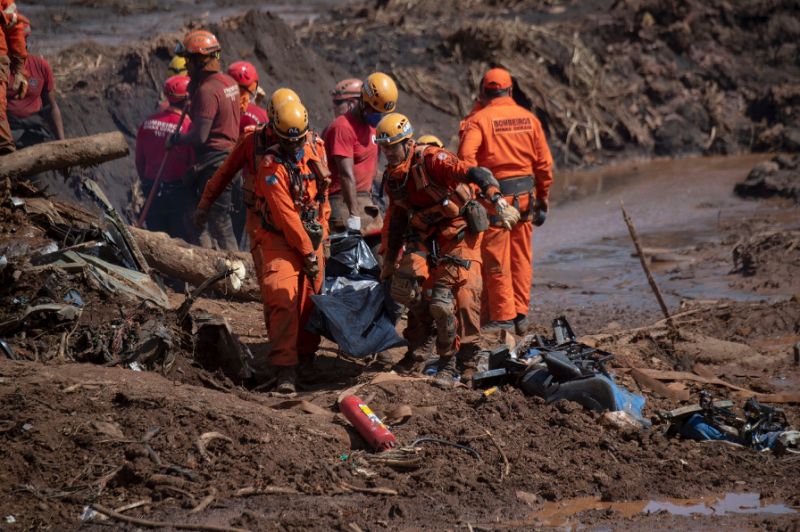 The death toll from the collapse of a Brazilian dam rose to 84 on Tuesday as mining giant Vale announced that moves to dismantle similar structures would hit production. Brazilian authorities are stepping up their probe of Vale, with five engineers involved in the operating licenses and the last inspection of the dam arrested on prosecutors’ orders in the state of Minas Gerais, where the disaster occurred Friday at one of the firm’s mines.

Flavio Godinho, Civil Defense spokesman in Minas Gerais, said the death toll had increased from 65 to 84, while the number of missing fell from 292 to 276. Shares in Vale — the world’s biggest iron ore miner — meanwhile ticked up nearly two percent in Sao Paulo, still far from recovering from a 24-percent wipeout suffered on Monday.

Brazil’s authorities feared pollution from the mine waste could reach hydro-electric power plants between early and mid-February.

The company said it will freeze operations around 10 dams in Brazil to dismantle structures such as the one that resulted in the Friday disaster — a move that will reduce annual iron ore production by 10 percent or 40 million tons. The dam collapse at the Vale mine near the town of Brumadinho occurred three years after a similar disaster at another one of its sights in the same region.

That 2015 dam rupture, near Mariana, killed 19 people and caused what was considered the worst environmental catastrophe Brazil had seen. After the latest disaster, credit ratings agency Fitch downgraded Vale’s score, and Moody’s said it had the company under review for a downgrade.

Three US law firms were also making moves toward starting a class-action lawsuit against the miner. Brazilian media speculated that Vale’s board and top executives might be replaced. The overwhelming majority of the dead and missing were workers at the mine.

Authorities have ordered $3 billion in Vale assets be frozen to pay for fines, compensation and employee salaries to families. “If there has truly been negligence or recklessness by certain people in that company, they will face criminal action,” Brazilian Vice President Hamilton Mourao vowed Monday.

The death toll from the collapse of a Brazilian dam rose to 84 as mining giant Vale announced that moves to dismantle similar structures would hit production.

The search for bodies was ongoing Tuesday, with a team of Israeli soldiers joining Brazilian crews who have been laboriously probing for days the expanse of mud released by the dam. The barrier, which was in the process of being decommissioned, held around 13 million tons of tailings, or sludgy mining waste.

Men were digging, often by hand, to depths of up to 15 meters (50 feet) to recover corpses encased in mud. The remains were then bagged and airlifted away by helicopter. The fetid odor of decomposing bodies rose from the brown surface. With a dozen kilometers (eight miles) of mud to carefully scour, the operation has proceeded slowly, barely denting the long list of the missing.

Jose Ferreira da Silva, a 55-year-old laborer, was blocked by police as he attempted to enter the zone to look for his 27-year-old son Josue, who worked for a Vale contractor. “We just want to try to do something,” he said, tearfully.

No survivors have been found since Saturday, only bodies. Corrego do Feijao, the closest village to the mine, has been in mourning since the disaster. Most of its inhabitants work for Vale, and 20 of their number were missing. “I’m living a horror film. These are people I grew up with. I don’t know how I’m going to get through this,” said Cleyton Candido, who was waiting on news of his missing nephew and several friends.

Authorities have ordered $3 billion in Vale assets be frozen to pay for fines, compensation and employee salaries to families.

The toxicity of the mineral-laced sludge was not yet known. But an indigenous community downstream complained that fish it relies on for its livelihood were dying. Brazil’s authorities feared pollution from the mine waste could reach hydro-electric power plants between early and mid-February.

The environmental group WWF said that a forest area “equivalent to 125 football fields” had been lost, and it was still too early to know the full ecological scope of the disaster.

The tragedy has turned public opinion against Vale. On Monday, dozens of people staged a protest with mud in front of the company’s headquarters in Rio de Janeiro. Newspaper editorials blasted it — and the government — for not learning the lessons of the 2015 Mariana disaster.

Minas Gerais prosecutors said they have launched a probe “evaluating the criminal responsibility of the Vale company.” The five engineers arrested were part of that investigation. They were to be held for up to 30 days for questioning.

Three of the engineers work for Vale and were directly involved in the process of the facility’s operating licenses, the prosecutors said. The other two worked for TUEV SUED, a German company that in September carried out the last safety inspection of the collapsed mine.

why do we not use the magnetic energy the Earth provides to create electricity?