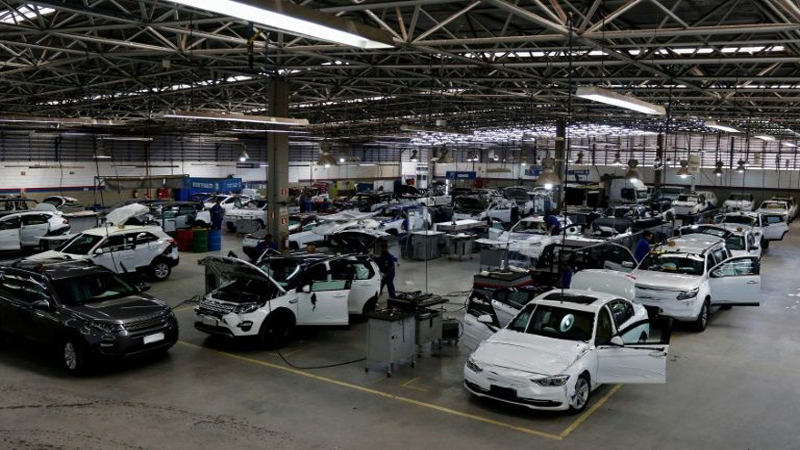 Brazilians are as worried as ever about getting shot while driving but have less money in a stagnant economy to spend on protecting themselves. Enter the second-hand bulletproof car. Whether to provide genuinely-needed protection or just to show off, the bulletproofed personal vehicle has usually been associated with the rich, but in Brazil, armored cars are far more common than in most countries.

Industry experts consider Brazil’s $245 million (one billion reais) bulletproofing industry the largest in the world. But with an economy only just crawling out of recession one percent growth in 2017 came on the heels of a steep two year-recession worried drivers are searching for budget options. “I like cars, but I don’t feel comfortable spending a lot of money on one,” said lawyer Mauricio Paulo, who drives a second-hand bulletproof Volvo XZ 60.

Sales of new cars, in general, plummeted to a 10-year low in 2016 in Brazil. The niche market in new armored cars mirrored the trend, dropping 20 percent last year, compared to 2016.

This is the 40-year-old Paulo’s fourth armored vehicle. He got his first armored car after being robbed while he stopped at a traffic light. The birth of his daughter 18 months ago convinced him he still needs to have one and stay frugal. “I need a bulletproof car because of lack of safety,” he said. “I went for a used car because I’m going to spend less money to move around safely.”

To modify a car costs around $13,000 (53,600 reais), pretty much like buying an additional vehicle. Going for an already used and already armored vehicle gets the price tag down by between 10 and 40 percent, according to varying estimates from dealers and owners.

Another big market, Mexico, bulletproofed 2,986 cars in 2017, one of the best years the industry there has had. But even in a tough climate last year, Brazil’s armoring industry still put out over 15,000. Armored private vehicles are especially common among the middle class in the economic hub of Sao Paulo, regardless of the fact that the mega-city is one of the safest parts in an often extremely violent country.

Almost three-quarters of bulletproofing work is done in Sao Paulo state, and most of the country’s 150,000 armored vehicles are also in the state, according to the bulletproofing association Abrablin. Neither Abrablin nor the used car sellers’ body Fenauto keeps track of second-hand armored sales. But industry experts say it is a real trend here.

“This year, the used car market is hot,” said Fabio Rovedo de Mello, director of a Sao Paulo-based bulletproofing company. “Because of the situation the country is going through, the demand for used cars has gone up.” Sales of new cars, in general, plummeted to a 10-year low in 2016 in Brazil. The niche market in new armored cars mirrored the trend, dropping 20 percent last year, compared to 2016. “When the new market doesn’t sell, there’s higher demand for used cars, because a person can’t afford to buy a new one,” said Abrablin president Marcelo Christiansen, who also heads up a bulletproofing firm.

“Those who have a bit more resources can protect themselves better,” he said. “Those who don’t can even lose their lives over something small.”

“Armored cars are a lot more expensive, so the option was to go for a used car that fell within my budget,” said Eliane Wakatsuki, 39, a manager at a hydroelectric firm, who was test-driving a used Mercedes Benz GLA 200 at a luxury bulletproofing outfit. Even those drivers who still buy new cars and get the armoring added are looking for deals. Last year, the best-selling new car for bulletproofing was the Toyota Corolla, the cheapest and smallest that can handle armor, which can add up to 12 percent to the vehicle’s body weight.

Do they need it?

Owners say high crime rates drive them to seek extra security. Some international companies based in Brazil compel their expat employees to drive armored vehicles. But whether the cars are needed is another question. Sao Paulo, Brazil’s richest state, had the lowest murder rate in the country in 2016, the last year for which comparative figures are available. There were 10.9 murders per 100,000 people against a national average of 30.3, while Sergipe state in the northeast had 64.7.

“Having a bulletproof car in Brazil is about status. People are more worried about status than they are about their own safety,” Christiansen said. “The wife gets angry because the neighbor has one and she doesn’t, so she tells her husband: ‘I need a bulletproof car.'”

For Paulo, the armored vehicle may bring security, but also a troubled conscience. “Those who have a bit more resources can protect themselves better,” he said. “Those who don’t can even lose their lives over something small.” “You feel bad because people are separated by their economic power in third-world countries and that’s sad.”

TikTok to be another casualty in US-China Cold War