Can education be decolonized in Pakistan? 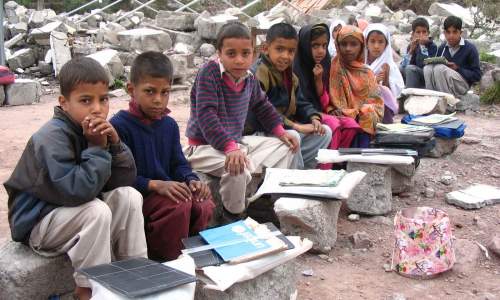 Established initially as institutions of higher studies, Madrasahs taught law, Islamic sciences and philosophy. Prior to the arrival of British, both religious and secular education was taken care of for Hindus and Muslims by their respective religious institutions together. Madrasahs taught Quran together with Tafsir Mantiq (logic), Kalam (theology) and Hikmah (philosophy).

In addition, mathematics, astronomy, and medicine were taught in some Madrasahs. Hindus studied their religion together with secular subjects in their Maktabs and Panthshalas. The British East India Company (EIC) gave attention to education in India only after the Charter issued to them by King George III in 1813 obligated them to spend money on education. EIC’s early representatives tried to keep indigenous education based on Arabic, Persian and Sanskrit intact but Baron Thomas Babington Macaulay’s educational “Macaulay Minute” in 1835 reversed the situation.

The Army Chief Gen Qamar Javed Bajwa at a recent seminar in Quetta called for widening the scope of their curriculum  to enable the students to play a more positive and productive role in society.

Looking with disrespect at traditional education he supported replacing Persian with English Language. Introducing secular western education, “Macaulism” separated it from religious education in India. Without knowledge of either Arabic, Persian or Sanskrit he instituted an education policy in support of the  British  Raj  which denigrated Indian languages and   knowledge,  established  the hegemonic influence of English as medium of colonial ‘instruction’ (not education) and used limitation  of  resources as a ploy  to  “form  a  class who may be  interpreters between us and the millions whom we govern – a class of persons Indian in blood and colour, but  English  in  tastes, in  opinions,  in  morals  and  in  intellect  …”

Regarded as standing in the way of knowledge and progress, religion was relegated to religious institutions only. Today’s Madrasah (plural “madaris”) is an Islamic religious school (seminary) where students, as young as nine or ten, and even younger, go to get religious education, to be schooled first in reading and then in religious studies. Initially part of a mosque, Madrasahs only later became separate institutions.

While educational values like the infusion of a spirit of piety and righteousness, the formation of high character, development of personality, the inculcation of civic and social values, promotion of social efficiency and the preservation and spread of national culture that traditionally were taught based on the tenets of religion vanished from education ever since it has been reduced to ‘instruction’ only.

The sheer magnitude of an enormous increase can be seen by this simple statistic: only 7,000 Pakistani children attended Madrasahs 30 years ago as compared to closer to 2 million today even by conservative estimates.

The Ottoman Empire’s reform period “Tanzimat” created a modern school system introducing modern ideals instead of Islam that was the foundation for earlier school systems. The General Education Regulation of Sept 1, 1869 covering primary/secondary education, recruitment of teachers, etc ensured the entire Empire was educated. Primary education was made mandatory and the network was systematized with a four-year primary  (sıbyan/ibtidaiye) school, a four-year upper primary (rüşdiye) school, a three-year lower secondary school (idadiye), a three-year higher secondary (sultaniye) school, and then the high schools (aliyye).

The Sibyan schools taught the alphabet, writing skills, calligraphy, arithmetic, Ottoman history, etc. The admission age was three years and after four years of schooling a final exam had to be taken. Funded by wealthy individuals and existing in every town, city and village. Some aspects of the Sibyan schools are found even today (1) co-education (2) food and clothing were provided with financial assistance to poor families (3) “Amen Parade” known to a ceremony of starting school was unprecedented at that time (4) when intelligent children were maneuvered towards education of music and reciting the Quran, to the sciences, and to more reputed educational institutions (5) children could choose the role of their adult life and (6) culture of social tolerance was encouraged among children of ethnic and religious sects or groups, etc.

Read more: 24% Increase in Sindh’s education budget; what will it achieve?

Next came “Rusdiye” level with advanced subjects such as bookkeeping, advanced geometry and memorizing all scriptures of the Qur’an.  At the “Idadiye” level students specialized in advanced humanities or advanced sciences followed by the “Sultaniye” school (colleges modelled on the French Lycees) where students learnt humanities or science. The last tier was the high school (Mekâtib-i Ȃliyye).

Madrasahs in Pakistan are mostly registered with the government as charitable corporate bodies with acquired tax exemption. The majority among the Sunnis are Barelvis, moderates seeking to be inclusive of local rituals and customs. The seminaries run by the Jamaat-e-Islami (JI) are non-sectarian but politically very active.  In the context of extremism, the remaining two streams of Madrasahs are considered most important. The Deobandi movement from the Indian town of Deoband (near New Delhi) school of thought has long sought to purify Islam by rejecting “un-Islamic” accretions to the faith and returning to the models established in the Holy Quran.

Madrasahs in Pakistan are mostly registered with the government as charitable corporate bodies with acquired tax exemption. The majority among the Sunnis are Barelvis, moderates seeking to be inclusive of local rituals and customs.

The Ahle-Hadith (followers of the way of the Prophet) have a similar emphasis “purifying” the faith as the Deobandis. An irresistible option for the impoverished, where their children also get free boarding and food when compared to crumbling or non-existent government-funded secular schools and an opportunity to gain literacy and employment. With no thought was given to the education needed to create truly dedicated citizens, the mess we are facing now is a result of this negligence.

Our Public Service Commission demands the aspirants to study British history in ridiculous detail thus perpetuating Macaulay’s spirit. Much lip-service has been given to reforming Madrasahs without success.

The sheer magnitude of an enormous increase can be seen by this simple statistic: only 7,000 Pakistani children attended Madrasahs 30 years ago as compared to closer to 2 million today even by conservative estimates. Violent interpretations of Islamic texts and militant pamphlets or magazines advocating violent jihad against other religious sects form part of the curricula in certain Madrasahs, especially those openly aligned with particular militant groups.

The inculcation of civic and social values, promotion of social efficiency and the preservation and spread of national culture that traditionally were taught based on the tenets of religion vanished from education ever since it has been reduced to ‘instruction’ only.

A study in 2009 found about 18% of the Madrasahs were affiliated with sectarian outfits Sipah-e-Sahaba, Jaish-e-Muhammad, Lashkar-e-Jhangvi, etc. Research finds a disturbing connection between Pakistani Madrasahs and Islamic extremism including sectarian violence. However while vast majority of Madrasahs, almost 80% do not subscribe to this virulent hate but may be far from rendering adequate education, it is wrong to condemn most Madrasahs outright as supporting Jehadis.

Concerned that only religious education is being imparted to the students at the Madrasahs, the Army Chief Gen Qamar Javed Bajwa at a recent seminar in Quetta called for widening the scope of their curriculum  to enable the students to play a more positive and productive role in society. Whether Islamic and/or secular we must revise the concept where the role of character building of the student in education is neglected. What Pakistan really meets is ensuring education across the board that in addition to modern knowledge makes the student a better human being.

Is Nawaz really a threat to democracy?