Raja Farooq Haider delivered an emotional speech recalling how Kashmiris opened the doors in the morning to see if Pakistani forces are here. What role is Pakistan going to play in Kashmir freedom and how it can lead to another Indo-Pak war? 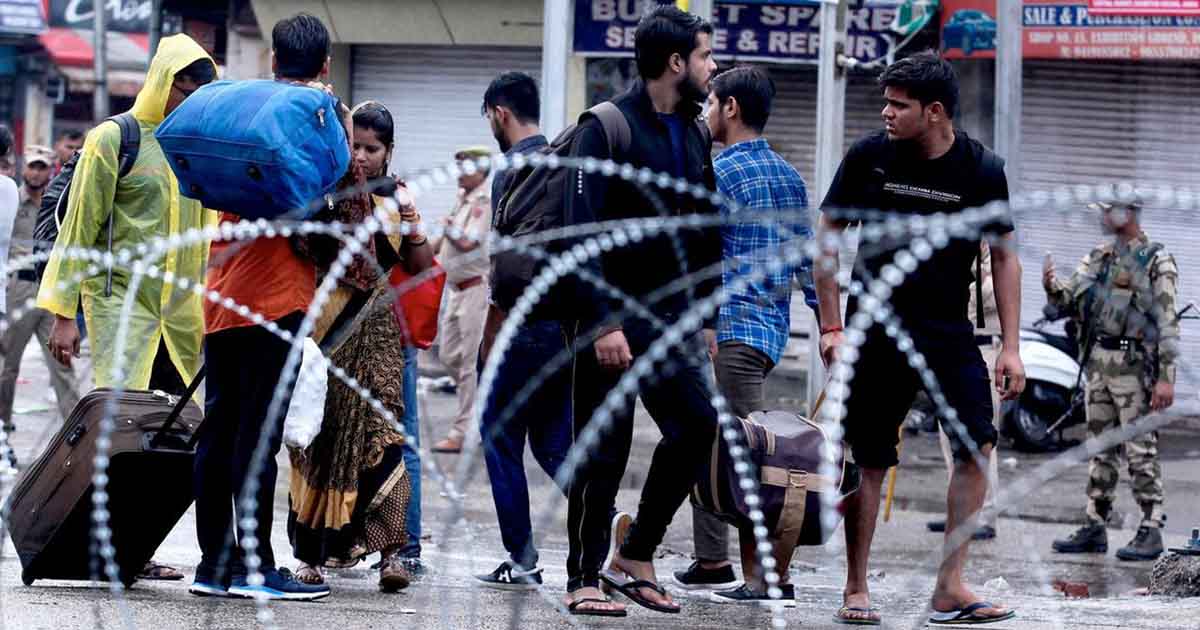 Raja Farooq Haider, the Prime Minister (PM) of Azad Jammu and Kashmir (AJK) delivered a very emotional speech at the recently concluded Senate’s Kashmir Conference. Before him, two great Kashmiri leaders (Sardar Ibrahim Khan and K. H. Khurshid) echoed similar views. Kashmiris have to lead the liberation movement, Pakistan has to be in a support role, demanding plebiscite for the people of the valley. Kashmir’s freedom struggle is historic spread over centuries of repression under the minority ‘Dogra Rule’.

According to ‘Lalu Prasad Yadav’ one of the smartest India Politicians, ‘Kashmir is like a bull, while one horn is clamped by India the other by Pakistan’. The time has come to unclamp the bull to set its course through a United Nations (UN) supervised plebiscite. It should be very clear that Kashmir belongs to the Kashmiris, let the bull charge unhindered.

Prim Ministere of Azad Kashmir Raja Farooq Haider's emotional speech in Islamabad. Asks PTI govt if its waiting for the last Kashmiri to be killed by Modi before any practical help is extended to the besieged Kashmiris? #Article370revoked pic.twitter.com/lXgTbGurjB

In 1947 the Kashmiris were divided. Sheikh Abdullah who was called Sher-e-Kashmir opted to conditionally remain within the secular Indian Framework but with complete autonomy as a Muslim majority state. Till August 05, 2019 the Kashmiris were divided when the state came under Indian control and the war that followed in 1948 they were not on the same page. Those who were opposed to the accession with India established an independent government in Muzaffarabad which became the capital of AJK. Sardar Ibrahim Khan the first President had one desk to operate from which was converted to a bed for the night. Gilgit Baltistan revolted and declared freedom from the Indian yoke.

Sheikh Abdullah learnt his lesson rather quickly. When he tried to exercise autonomy, he was replaced by Ghulam Mohammad Bakshi as the PM. The post was then downgraded as Chief Minister (CM). In 1962 during the Indo-China war, Pakistan could have liberated Kashmir and installed the imprisoned Sher-e-Kashmir as the PM. The Chinese ambassador pleaded with Ayub Khan but he was too timid to defy the telephone call he had received from Washington DC. Nehru promised a negotiated settlement if Pakistan did not encash on the opportunity to invade the valley when the Indian forces were being mauled by the Chinese.

In the hope of returning to their homeland, they decided to settle in Rawalpindi which was considered closer to the Kohala Bridge over River Jhelum en route to Srinagar.

After the war Abdullah was released, he traveled to Islamabad to negotiate a settlement. While negotiations were going on Nehru suddenly died in May 1964. His successor Lal Bahadur Shastri did not have the clout to settle the dispute. The 1965 skirmishes followed by the Indian attack in September were ill-planned and grossly mismanaged. The Kashmiris in the valley that was to be liberated were not fully on board. It was a failed effort that was opposed by the then Air Chief Asghar Khan whose family lived in the valley. The command was transferred to Nur Khan. The Air Force under his leadership performed exceptionally well and saved the day.

Today the Kashmiris stand united for freedom. The Abdullah’s, Bakshis and Muftis etc are crying out for help, they now realize their blunder of ascending to India in the lure of autonomy. United as one nation the Kashmiris on both sides of the line of control (LOC) are in a position to win freedom through their own crusade supported by Pakistan, China Iran, Turkey, and Afghanistan through their ‘Mujahideen’. With no local support from the Kashmiris, Indian troops will either retreat or made to surrender at Srinagar’s Bakshi Stadium.

Today, we journalists in #Kashmir had to protest against the communication blockade, which has crossed two months now. It hasn't been an easy task to be a journalist working in Kashmir in these times – without phones, internet or any communication. pic.twitter.com/9LKK2xRDnM

Pakistan will have to defend its own borders which were left unprotected in the 1965 war with India. The battle-hardened armed forces of the country are no pushover. With air superiority the defenses of Pakistan are impregnable. As both countries have nuclear capability there is bound to be restraint. The PM has categorically stated that India may be a more lucrative market for the West but an all-out war will decimate all foreign investments. Sanity must prevail. In his speech at the UN General Assembly, the PM has valiantly highlighted the tragedy and siege of the valley and its ramifications for the entire world. He urged the UN to play its role in determining the will of the Kashmiri people.

This time around it will be a war of the Kashmiris which will be fought by them. The ‘Wani Tigers’ together with the victorious Mujahideen will run over the occupying Indian forces who have no roots in the land. With the currently extended siege of the valley, there is no local support left for the Indians. With complete insurgency and gorilla war, Kashmiris will win their freedom driving the occupiers out.

In 1971 the ‘Mufti Bahanis’ supported by the Indian forces prevailed over our Army which resulted in surrender at the Decca Race Course ground. The tide has now turned against the Hindus, they are now at the receiving end, it is payback time. Four generations of my fathers’ family migrated to Pakistan in 1947. In the hope of returning to their homeland, they decided to settle in Rawalpindi which was considered closer to the Kohala Bridge over River Jhelum en route to Srinagar.

My father buried his grandmother and his parents in the new land. I buried my parents in Lahore, three generations have perished with unfulfilled dreams of returning to their place of origin. My journey to Srinagar will be a bit longer as I live in Lahore but I will be there in the first convoy to enter the free land. It may have been a long wait but it will certainly be worth the effort and struggle for freedom of Kashmir the paradise on earth. Freedom for Kashmir is now unstoppable.

Dr. Farid A. Malik is Ex-Chairman of Pakistan Science Foundation. The article was first published in The Nation and has been republished with the author’s permission. The views expressed in this article are the author’s own and do not necessarily reflect Global Village Space’s editorial policy.

News Desk - 11 May 2021
Pakistan's Exports reaching new limits as the country sees 29% increase in Exports to the US. Meanwhile, Kinnow Exports and Exports to Afghanistan also see a major increase this fiscal Year, compared to last.

How Indian rule has undermined the potential of Kashmiris

Pakistan can get the dangerous Indian COVID situation