After the passage of CAA(Citizenship Amendment Act) in India, the domestic political dynamics are changing rapidly due to the ultra-conservative opinions of RSS-inspired leaders about minorities, especially muslims. Muslims living in India are worried about their future given the prevailing intolerant environment in India. 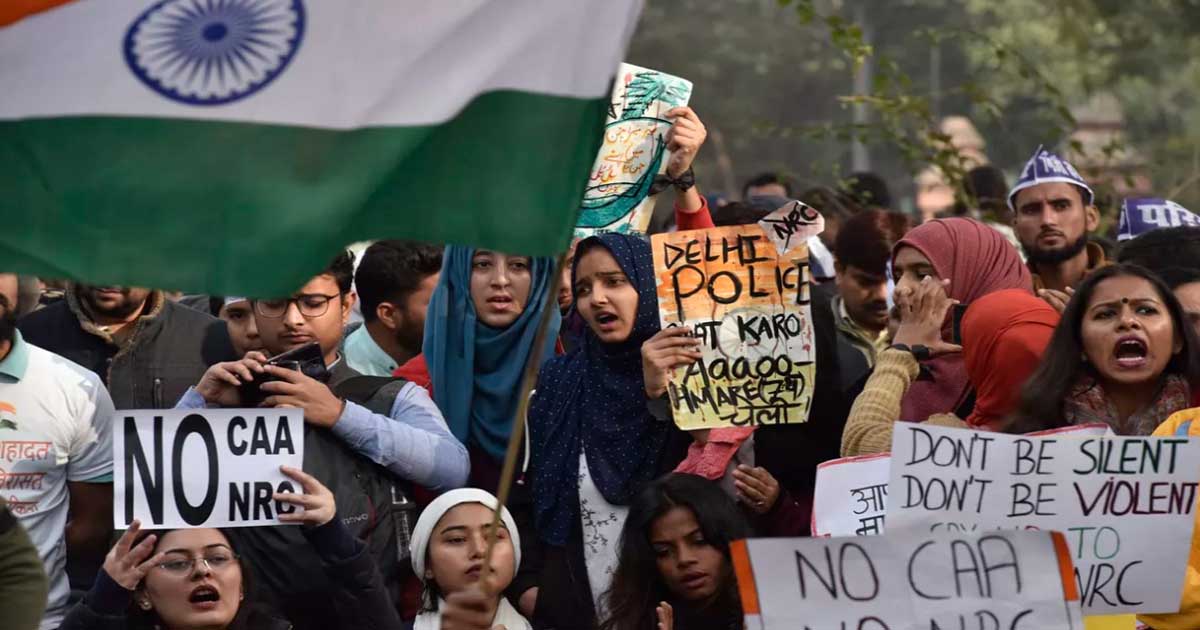 [Your self-respect does not rise by standing on your toes]

There is a fundamental difference between BJP mounting counter protest and the those following the Shaheen bagh pattern of peace and harmony and holistic approach to the Citizenship Amendedment Act, BJP leader Kapil Mishra threatened to take the law in hand and remove the protesters.

He went further and gave another ugly turn in the protest against CAA (Citizenship Amendment Act). He went beyond all decency when he quoted that however high heels footwear Muslim women wear to the protest they cannot rise in self-esteem. And that however Muslim men who make their women sit in protest centres cannot achieve anyting. The citizenship bill has come to stay, and will will stay.

The latter challenges their manhood and the former attributes mocks at their women’s status. To the thoughtful and decent Indians in general this is affront to Indian womanhood.

Even more disturbing and objectionable is the open confrontation of pro and against CAA protesters. The size of stones and frequency of targeting each other has rarely been seen. It signals how we are descending into a pit of nighmare and chaos. This was not seen some years ago even in Tirlokpuri 2015 election.

There was conspiracy to polarize Muzaffarnagar and then Trilokpuri based on religion to harness votes at election. In Muzaffarnagar all the seats to Parliament went to the BJP and when the Delhi election was scheduled for February 2015.

MLA Raju said, “[In Trilokpuri] Every time the violence subsides, BJP workers round up locals with exaggerated tales. People in this area voted for the AAP in the Assembly polls last December. The BJP is attempting to consolidate the Dalit vote here the way it did in UP.”

Congress leader Harnam Singh, who contested elections in 2013, alleged that the violence was instigated by a BJP leader. “He came to Trilokpuri around 2 pm and members of Hindu groups began chants of war cry ‘Har Har Mahadev’. This made things worse. Two hours after he came, the violence began again.”

The Muslims had to bear the aggressive thrust of the right-wing groups as some well-known social activists wrote to the Lt Governor of Delhi on October 26, 2014:

There are two aspects that need attention. One that Trilokpuri is an area where minorities live, and the tension and violence was used to force them to leave the place which is reminiscent of RSS boss Golwalkar’s attempt to mount a more comprehensive attempt to cause holocaust in the aftermath of the partition of India.

The RSS wanted India to be a Hindu country and not realizing their pipe dream to be viable then they used violence to deprive the Muslims of their homes and hearth. The Congress party was very strong, and the leaders were different and were free from the rank communalism Modi era has heralded in.

Another aspect to note is that RSS was a militia then also, but they were not so well-armed as they are now. They were afraid of government cracking upon them and never displayed their arms as they do now. They also have bombs which they used in blowing up the minarets of Babri mosque. Therefore, there is palpable danger to the unity and integrity of the country now as never before.

The exhortation that the protesters at Shaheen Bagh would rape women and kill men of the majority community has turned upon itself. The Maujpur crowd of supporters of CAA also used the vulgar expletives of “send your sisters and daughters to us and we will see you.” What was most disciplined and admirable of the Indian women by and large was traduced to most communal and hateful and arrogant aggressive Hindutva. This is truly rebirth of what VD Savarlar had cherished.

Women appearing at Shaheen Bagh had discovered in them the highest nobility of the Indian female. That liberated from caste and religion they could not only save the country and its Constitution but make India a prominent place for the women at large. The atmosphere was vitiated by Kapil Mishra’s arrival there soon after 3.30 in the afternoon of Sunday February 23 2020.

The stormy petrel is the radical firebrand of this time when the BJP was made to bite the dust in its fight in election in which harping Hindus to kill Muslims whom the arrogant and aggressive Hindus view as traitors of the country.

There is so much blood that has flowed down the Ganges and Jamuna that it reminds another firebrand in the army of the right wing-Sadhvi Pragyasingh whom Modi and Shah inducted in recent elections:

Pragya: I have asked Sameer Kulkarni (a caucused) to bring Ramji to my Ashram. My people will take him to Dyanand Pandey’s (another coaccused) and then dispose him off.

Purohit: I too want to ascertain what went wrong in Malegaon.

Pragya: Come to Jabalpur if you want to see him.

Purohit: Will it be proper to eliminate Ramj in such a manner?

This conversation is about the kind of affair she was allegedly involved in, an affair with Sunil Joshi. Swami Asimanand took it casually and cavelierly but the harder core like Indresh Kumar viewed it differently.

Most of the pracharaks of RSS involved in terrorism were enmeshed into bloody infighting among themselves. How bloody and gory would be the end result is difficult to gauge. However, it would be unparalleled in blood shed.

At present the Constitution of India is already embroiled in the protests over CAA and erosion of the provisions made therein. But the ruling party under PM Narenda Modi has made no bones of its intention. And anyway the RSS itself takes care of those who break its discipline for their private or personal matters which threaten establishment of the Hindu rashtra. Ramsingh Kalsangra was eliminated and so were Sunil Joshi and Perve Azhar and others.

There is early sign that the kind of Hindu Rashtra that Mohan Bhagwat and his RSS want may not be ‘nationalism’ which smacks of Nazism but even more bloody for Hindus and Muslims alike.

A more ferocious consequence of Hindu Rashtra would be tearing to pieces of holism. Amulya of Karnatak was not an urban naxalite as the government in Bengluru and Delhi would like to call her. She was quite holistic in her world view and shouted in praise not of India, Pakistan, but also Nepal, Afghanistan. But BJP is obsessed by atom-ism as it sees more devils than there are in the world of tukde tukde gang.

The writing on the wall is clear that innocent people like head-constable Ram Lal killed in stone pelting is deeply tragic loss.

More horrendous is what will follow when the Trumps leave India and the deadline given by Kapil Mishra ends.

False flag attempt in Jammu and Kashmir by India

Here is how India reacted to Pakistan’s new political map