Chief of Army Staff meets Ambassadors of Iran and Turkey

The Turkish Ambassador Ishan Mustafa Yurdakul was the first one to visit GHQ on 12th February. He discussed matters of mutual interest including regional security issues with the COAS. The two noted the exceptional relationship between the nations of Turkey and Pakistan, and pledged to further improve the relationships. The Turkish envoy also acknowledged and appreciated the contributions of Pakistan Army towards peace and stability of the region.

Ishan Mustafa Yurdakul assumed the charge of Ambassador to Pakistan on 1st January, 2018. He assumed office after the completion of the tenure of Dr Sadik Babur Girgin, who had been the Turkish ambassador to Pakistan from 2013. Ihsan Yurdakul is a career diplomat having a huge experience Turkey’s Foreign Service. He has served as diplomat in several world capitals including Sofia, Vienna and Berlin. 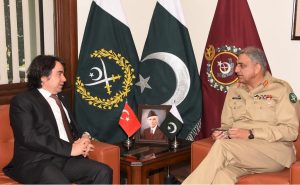 The visit of the Turkish ambassador was followed immediately by a visit of the Iranian ambassador to Pakistan. Mr Mehdi Honardoost visited the GHQ and met the COAS to discuss matters of mutual interest. Pak-Iran border management was also discussed during the meeting according to ISPR. Iran is a neighbour of Pakistan and shares a border of 700k with Pakistan. 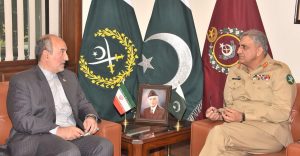 After the meeting, the COAS has left for Afghanistan on 13th February to attend Chief of Defence (CHOD) Conference according to ISPR. Commander US CENTCOM General Joseph Votel, Commander Resolute Support Mission (RSM) General John Nicholson and Afghan Army Chief Gen. Sher Mohammad Karimi will also be attending the conference.

US hostility pushes Iran and Turkey closer together