China Friday launched one of the world's most powerful rockets in a major step forward for its planned mission to Mars in 2020. China's space programme has alarmed the US, which fears that Beijing will threaten its dominance in space.

China Friday launched one of the world’s most powerful rockets in a major step forward for its planned mission to Mars in 2020.

The heavy lift Long March 5 rocket carrying a Shijian 20 test satellite payload blasted off from the Wenchang launch site on the southern island of Hainan at 8:45 pm (1245 GMT), a livestream from state broadcaster CCTV showed.

China’s space programme has alarmed the US, which fears that Beijing will threaten its dominance in space

The successful launch is a key part of China’s ambitious plans for a mission to the Red Planet next year and hopes of having a crewed space station by 2022. 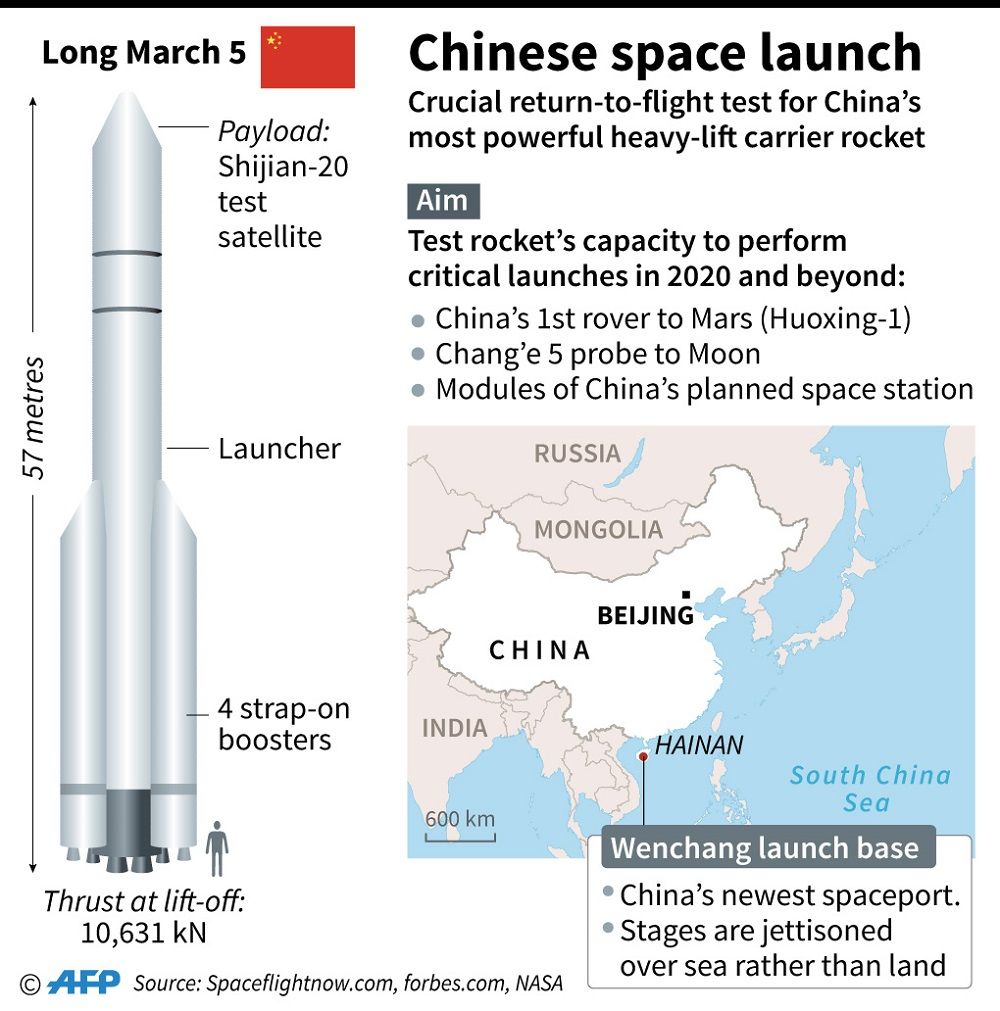 “It will be tasked with a series of key missions including launching China’s first Mars probe, the Chang’e-5 lunar probe and a core module for the manned space station.”

The successful launch is the first Long March 5 since a first-stage booster failure in 2017 destroyed the Shijian 18 satellite. The failure prompted redesigns in the rocket’s first-stage engines, which led to a two-year gap between missions.

More than a million people watched an online livestream of the launch and crowds gathered near the island launch site cheered as the rocket blasted off into the night sky, videos posted on social media showed.

Read more: NASA signs deal with Lockheed to take astronauts back to moon

“Fat Five,” the rocket’s nickname, was a trending topic on the Twitter-like Weibo social media platform. Friday’s success gets the space programme back on track after a previous attempt in July 2017 failed mid-launch.

#China and @UNOOSA signed a declaration on international space cooperation – researchers from countries all over the world will be able to use the China Space Station. 🌌 🚀 🛸 https://t.co/zalczln7Pg pic.twitter.com/cJJpdwvOCx

The Long March 5 Y2 was supposed to put the Shijian 18 experimental communications satellite into orbit and its failure delayed plans to use the rocket in a planned mission to collect lunar samples in the second half of 2017.

China successfully launched the first Long March 5 in November 2016, which it said at the time was the most powerful launcher it had yet developed.

The Long March 5, which is capable of carrying up to 25 tonnes, is comparable in capacity to the US-made Delta IV Heavy and Russia’s Proton-M, some of the most powerful launchers in existence, according to NASASpaceFlight.com.

By contrast the US’s Saturn V, which delivered astronauts to the Moon in 1969, was designed to deliver some 140 tonnes of payload into low Earth orbit.

Beijing has invested billions of dollars in its space programme in an effort to catch up with its rival the United States and affirm its status as a major world power. In 2003, the Asian giant, which now spends more than Russia and Japan on its civil and military space programmes, became only the third nation to put a human into orbit.

In January 2019, China became the first nation to land a probe on the far side of the Moon. The Chang’e-4 lander — named after the Moon goddess in Chinese mythology — released a rover in the Moon’s South Pole-Aitken Basin shortly after New Year.

In November China completed a test of its Mars exploration lander, ahead of its first mission to the Red Planet slated for 2020 which is planned to deploy a rover to explore the Martian surface.

Read more: China to look for life on Mars

China also aims to have a manned space station in orbit in 2022. The Tiangong — or “Heavenly Palace” — is set to replace the International Space Station, which is due to be retired in 2024.

In 2020, China claims it will launch a variety of missions, including a rover to Mars, return a sample from the moon and put a space station module into orbit. If China successfully places a space station into orbit, it will be only the third nation to do so, after the former Soviet Union and the United States.

China will also seek to build an international lunar base, possibly using 3D printing technology, in the future, Wu said in January. China’s space programme has alarmed the US, which fears that Beijing will threaten its dominance in space.

The Kaizen Way to Live a Productive Life

Audi E-Tron gets a massive price reduction in Pakistan

Sajal Aly, Adnan Siddiqui in row over the remix of national anthem

Sajal Aly, Adnan Siddiqui in row over the remix of national anthem