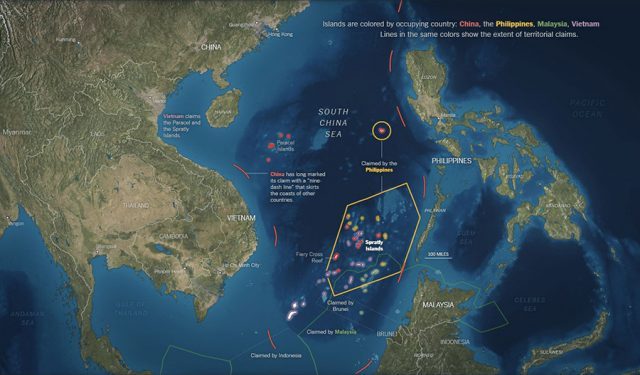 Philippine Foreign Secretary, Alan Peter Cayetano felw to China on March 20, 2018 to pursue talks on possible joint development projects in the South China Sea in order to lessen the conflicts in the disputed waterways. Cayetano said, “We will be discussing broad areas of collaboration and cooperation. We also make it a point to talk about our differences of our dispute in the South China Sea. We talk about it in context of how we can improve the situation.”

China claims on the South China Sea in order to take an important trade route  to contain large quantities of oil and natural gas while Brunei, Malaysia, Vietnam, the Philippines, all of which are members of ASEAN, and Taiwan also have claims in the sea.

The riches of South China Sea and the current dispute

The South China Sea disputes involve both island and maritime claims among several sovereign states within the region, namely Brunei, the People’s Republic of China (PRC), Taiwan, Malaysia, Indonesia, the Philippines, and Vietnam. Territorial and jurisdictional disputes in the South China Sea continue to strain relations between China and other countries in Southeast Asia, risking a military escalation.

South China Sea is 3.5 million square kilometers of underlying bedrock, which contains oil and natural gas deposits that are estimated to be at least equal to Mexico’s and, by some contested Chinese estimates, might be second only to Saudi Arabia’s. Also home to lucrative fisheries and supply routes that carry 80 percent of China’s crude imports, the territorially disputed region may be the most strategically important waterway of the 21st century. $3.37 trillion worth of trade crossed through the South China Sea in 2016.

For centuries, these waters also have been vital to the economic survival of neighboring Vietnam, Malaysia, Brunei and the Philippines.

China and Philippines have extensive conflicts on islands and reefs on the South China Sea. Moreover, the US has extended its military services known in order to ensure the access to shipping and air routes. It is a well-known reality that the US and China have certain conflicting strategic interests or confrontations in different part of the world for instance in the Indian Ocean, Asia Pacific and South China Sea along with their bilateral cooperative relations in some fields like in trade and commerce. Subsequently, the regions are heavily militarizing by the both sides having severe global consequences. Basically the dispute in the South China Sea is a dispute over territory and sovereignty over ocean areas, and the two islands of Paracels and the Spratlys.

According to International Hydrographic Organization (IHO) Limits of Oceans and Seas, 3rd edition (1953), it is located at the south of China; east of Vietnam; west of the Philippines; east of the Malay peninsula and Sumatra, up to the Strait of Singapore in the western, and north of the Bangka Belitung Islands and Borneo. The genesis of China’s claim over these islands go back to goes back centuries to when the Paracel and Spratly island chains were regarded as integral parts of the Chinese nation.

China has built some artificial islands in the South China Sea.

The recent development of Philippine and China’s mutual understanding over the South China Sea dispute may bring some normalization as Philippines was considering two areas in the disputed sea for possible joint exploration with China: SC 57, which covers offshore northwest Palawan; and SC 72, which covers Reed Bank, a large table mount off Palawan being claimed by China. Earlier the officials of both countries have held the second round of their bilateral consultations on this sea.

At the same time there should be legal treaty between the two countries for their firm commitment for the peaceful resolution of the dispute. Moreover, China has built some artificial islands in the South China Sea which are serious concern for the above mentioned countries.

Read more: Can China replace the US in the near Future?

“The Philippines and China are finding a common legal framework to conduct joint exploration and surveys. And with our discussions today I’m confident that we will find a suitable legal framework for our differences”, Cayetano said.

Read more: What is the Importance of South China Sea for the US

Simultaneously it is important to keep the US role in this dispute as it is yet to be seen that how it will unfold the future prospects whether confrontation or cooperation with China.

China: Getting rich whilst looking after the poor

Doklam is a riddle, wrapped in a mystery, inside an enigma