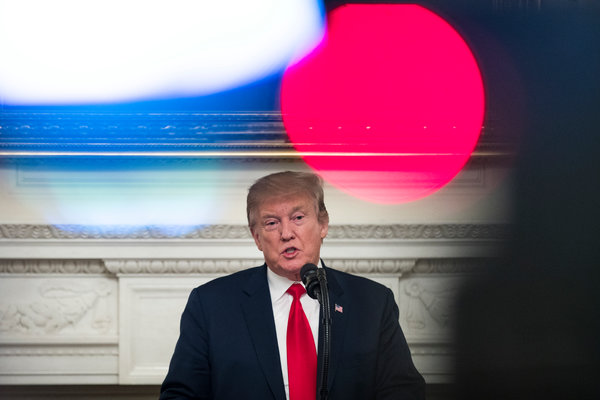 China has announced tariffs by up to 25% on 128 items imported from the US. The announcement was made late on Sunday and the tariffs will take effect on Monday. The news comes as fears of a ‘trade war’ between two of the world’s largest economies continue to grow. The US president had announced tariffs on goods of about $60 billion in worth on March the 22nd as discussed in an earlier piece “Are the US and China marching towards a trade war?”.

China took retaliatory measures last week by announcing tariffs on US goods of nearly $3 billion in worth. Many interpreted the move by Beijing as a ‘symbolic warning’ to Washington that trade wars will hurt the US as well. Now, however, Beijing seems to have upped its game and is serious about taking reciprocal tariff measures. The US, for its part, will announce tariffs on high tech goods this week. The US Trade Representative (USTR) Office is expected to make the announcement on Friday.

Washington accuses Beijing of intellectual property theft. The goods worth $60 billion in annual imports are mostly high tech goods. Robert Lightizer, a representative of the US Trade Office said that ‘the future of the US economy’ is in preserving its technological edge. The USTR said, in a report that justified the newly imposed tariffs on imports from Beijing that “China is still catching up in many of the areas prioritized for development.”

The announcement was made late on Sunday and the tariffs will take effect on Monday. The news comes as fears of a ‘trade war’ between two of the world’s largest economies continue to grow.

On the other hand, in China, an op-ed in the Global Times titled “China tariffs offer US a dose of its own medicine,” argued that “it is time for Washington to bid farewell to the fantasy it has long been living in, a delusional world of make-believe whereby it imagines China as an unresponsive nation and tolerant toward US tariffs.” The opinion piece further said “Either side has yet to confirm whether the latest tariff measures signal the start of a trade war.”

Earlier in March, Zhong Shan, the Minister of Commerce in China said that a trade war will bring disaster to both countries. The minister further added that “everyone knows trade wars hurt others without helping [the countries that started the trade wars] themselves.” He said this in a press conference on the side of annual meeting of the National Party Congress of the Communist Party of China. Top economic advisor to President Xi Jin Ping of China, Liu He, also warned that a trade war between the US and China would harm both countries.

China has had double-digit growth for decades and has become a global power. Although the US has the highest nominal GDP; China is already the world’s largest economy in terms of purchasing power parity. Analysts differ on the timescale but there is near unanimous agreement among experts that China will overtake the US as the world’s largest economy. Bejing is also rapidly modernizing its army and its navy. Washington is apprehensive of the possibility of being replaced as the number one superpower on the planet.

Recently anonymous American companies have accused the Chinese Government to steal their intellectual property — everything from product designs and sensitive data. The US has an edge over China in technology and wants to maintain this advantage. This is one of the reasons behind the tariffs announced by Trump.

The goods worth $60 billion in annual imports are mostly high tech goods. Robert Lightizer, a representative of the US Trade Office said that ‘the future of the US economy’ is in preserving its technological edge.

During his campaign for the presidency, Donald Trump criticized China various times for ‘unfair trade policies’. At one occasion, he said that ‘we cannot continue to allow China to rape our country.’ He also tweeted once that it’s very easy to win trade wars. At a rally during the race for the presidency, he had said once that ‘trade wars are good’. Earlier this year, he imposed a 25% tariff on steel and 20% tariff on aluminum imports. Then, in March, he announced tariffs on ‘mostly high tech products’ worth $60 billion annually.

China reacted by imposing tariffs on imports nearly $3 billion in value from the US. The tariffs by China are on about a 120 types of products, including fruit, wine, steel pipes, pork and recycled aluminum. On Sunday, China’s Ministry of Commerce said it was increasing tariffs on 120 U.S. goods, including fruit and ethanol by 15%. Tariffs will be increased by 25% on eight other types of products, including pork and scrapped aluminum, as well.

According the Census Bureau of the United States, trade deficit with China was over $375 billion in 2017, whereas, in January 2018 alone, it stood at nearly $36 billion. To some extent, this is not surprising since America has the largest consumer market while China is known as the “factory of the world”. 60% of all shoes in the world, 70% of all mobile phones and 80% of all air conditioners are manufactured in China.

Analysts differ on the timescale but there is near unanimous agreement among experts that China will overtake the US as the world’s largest economy.

Trump aims to reduce this trade deficit by imposing tariffs on imports. To what extent this will prove to be successful remains to be seen. Several businesses in the US have criticized Trump’s decision to hike tariffs, arguing that this would make products expensive for the American consumer.

When Trump met Xi Jin Ping last fall, he praised China for ‘taking advantage of the US’. When he was announcing the tariffs on high-tech goods, Trump said “The word that I want to use is reciprocal – when they charge 25 percent for a car to go in, and we charge 2 percent for their car to come into the United States, that’s not good. That’s how China rebuilt itself.”

The Chinese embassy in the US criticized Trump’s decision. In a statement, the embassy said, “China does not want a trade war with anyone. But China is not afraid of and will not recoil from a trade war”. The statement further said, “The actions undertaken by the U.S. are self-defeating. They will directly harm the interests of U.S. consumers, companies, and financial markets.