Chinese General Xu Qiliang meets President Arif Alvi, Prime Minister Khan in Islamabad. Both sides agreed that Pakistan and China would continue to closely consult and coordinate for the promotion of peace and stability in the region. 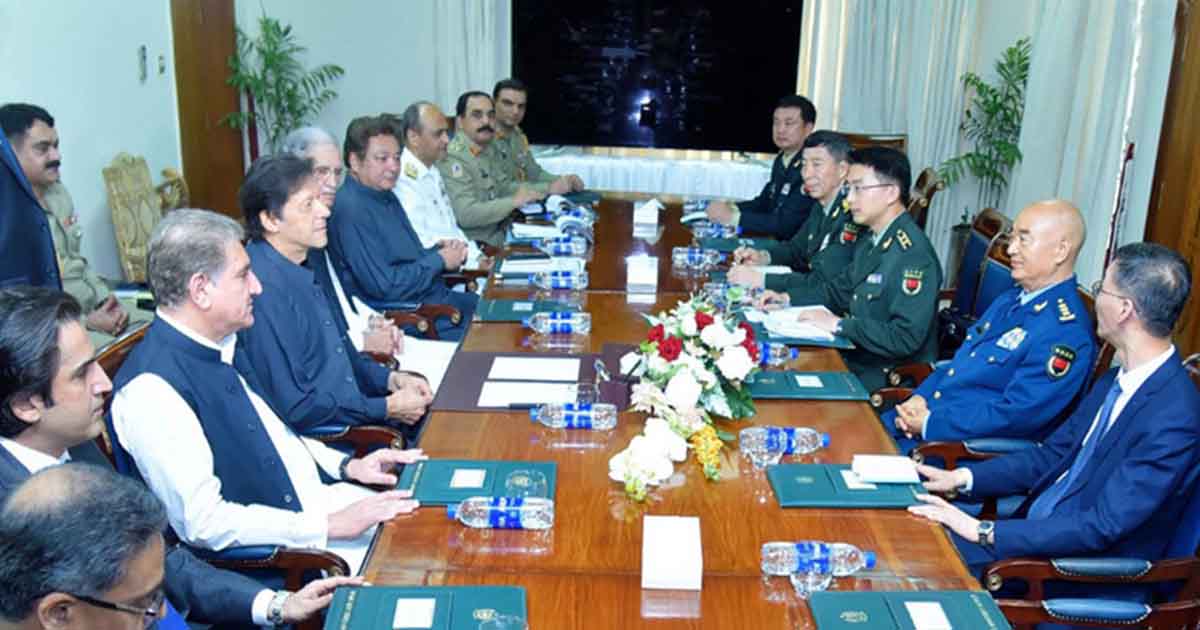 Khan briefed the Chinese general over the current situation in Kashmir after Indian government’s Aug. 5 move scrapping the special status of the disputed valley.

“General Xu Qiliang conveyed cordial greetings of President Xi Jinping, as well as that of Premier Li Keqiang, and reaffirmation of China’s full support to Pakistan, particularly at this crucial juncture,” the statement added.

Underscoring the time-tested China-Pakistan strategic partnership, he conveyed the Chinese leadership’s commitment to the time-honored tradition of both countries supporting each other on core national interest issues.

Pakistani president acknowledged unique, all-weather and time-tested China-Pakistan friendship and China’s support for Pakistan at multilateral forums, particularly at UNSC in the wake of India’s steps in Kashmir.

Chinese General reiterated Beijing’s resolve to work for further strengthening China-Pakistan ties in a broad range of areas and underlined that the South Asia region needed stability and economic development and resolution of outstanding disputes and also appreciated Pakistan’s efforts in advancing those goals.

“Curfew in the IoJ&K [Indian Occupied Jammu & Kashmir] must be immediately lifted and the international human rights NGOs allowed to visit IoJ&K to have an objective assessment of the humanitarian tragedy unfolding there,” Khan stressed.

The “brutal suppression of human rights in IoJ&K” had the potential to spark a wave of extremism and India’s reckless actions could destabilize the region immeasurably, he added. Khan also informed the visiting Chinese general that India could stage a false flag operation to divert the world’s attention from its crimes.

Both sides agreed that Pakistan and China would continue to closely consult and coordinate for the promotion of peace and stability in the region as well as the maintenance of strategic balance.

General Xu Qiliang also met President Dr. Arif Alvi at the Aiwan-e-Sadr [President’s House] in Islamabad. According to a statement by the president’s house, Alvi said that his country deeply valued China’s defense cooperation with Pakistan and its support in national security issues.

Pakistani president acknowledged unique, all-weather and time-tested China-Pakistan friendship and China’s support for Pakistan at multilateral forums, particularly at UNSC in the wake of India’s steps in Kashmir. “The visiting delegation assured Pakistan of China’s continued support”, the statement concluded.

Some Kashmiri groups in Jammu and Kashmir have been fighting against Indian rule for independence or for unification with neighboring Pakistan.

India, earlier this month, removed all special provisions granted to Jammu and Kashmir under Article 370 of Indian Constitution. It also divided the erstwhile province into two centrally administered “union territories” and took away powers from the assembly.

From 1954 until Aug. 5, 2019, Jammu and Kashmir had special provisions under which it enacted its own laws. The provisions also protected the region’s citizenship law, which barred outsiders from settling in and owning land in the territory.

India and Pakistan both hold Kashmir in parts and claim it in full. China also controls part of the contested region, but it is India and Pakistan who have fought two wars over Kashmir. Some Kashmiri groups in Jammu and Kashmir have been fighting against Indian rule for independence or for unification with neighboring Pakistan.

Athletes knock the legs from under global sports governance