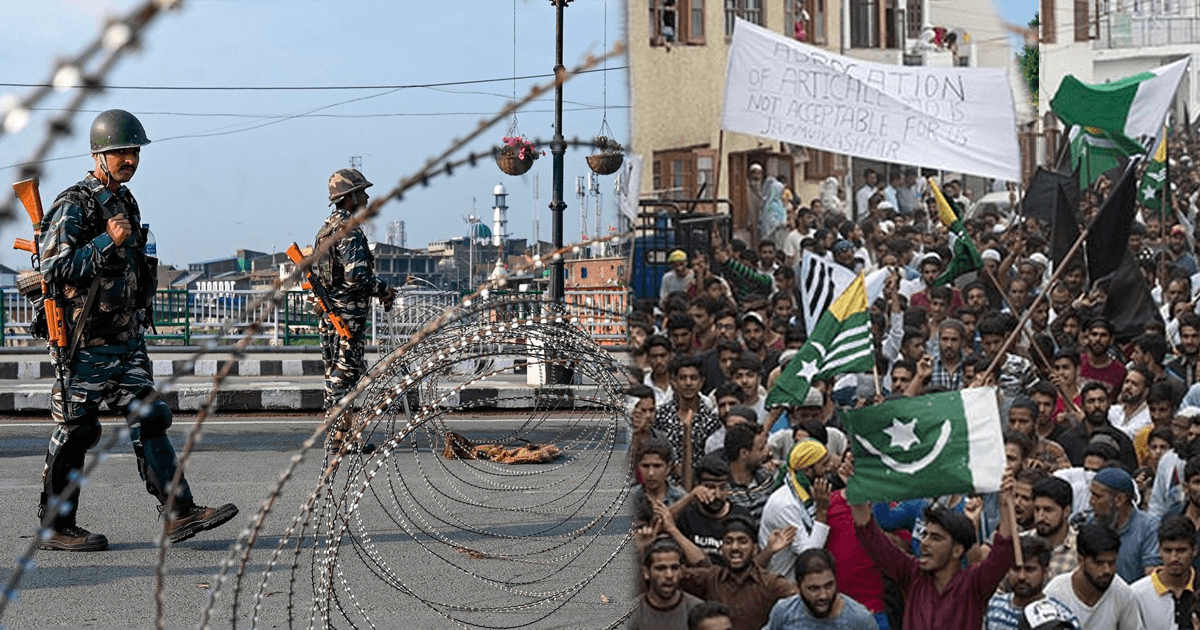 Washington Post report of 23rd August, making rounds on social media, exposes the systemic lies of Modi Government. Fascist Hindutva regime of BJP that has imposed curfew and complete news black out on almost 8 million Kashmiris, since Aug 4, has been trying to convince the Indian citizens and the world at large that situation, in the occupied Kashmir, is fast returning to normalcy.

Pakistani Prime Minister, Imran Khan, has repeatedly described Narendra Modi’s Hindutva government as ‘fascist’ a reincarnation of Adolf Hitler’s nazi regime. This description quoted and reproduced by several public figures and publications across the world is creating an unprecedented challenge for Modi and his right wing political supporters. BJP a political party that owes its origins to right wing fascist parties like RSS and Bharatiya Jana Singh (founded 1951) has cleverly hidden itself behind the secular image of India cultivated by Pundit Nehru.

The Hindu Supremacist Modi Govt poses a threat to Pakistan as well as to the minorities in India & in fact to the very fabric of Nehru & Gandhi's India. To understand the link between Nazi ideology & the ethnic cleansing & genocide ideology of RSS-BJP Founding Fathers just Google

Jana Singh was founded by Syama Prasad Mukherjee on single point agenda of ending Kashmir’s special status. Kashmir’s Muslim identity has been an anathema for the right wing Hindutva leaders. Though Modi has described his actions – while unilaterally abrogating Art. 370 and 35-A on Aug 5 – as countering terrorism, reality is that ending Kashmir’s special status was a long standing ideological demand from right wing extremist supporters of BJP and it was an election commitment. Linking abrogation and special status of Kashmir with counter-terrorism was another lie; this action was part of a long planned strategy in operation since at least 2014 elections.

Modi and BJP hate Pundit Nehru, but irony is that they have successfully hidden themselves behind Nehru’s secular legacy for public relations and image management across the western world. However, with their actions in Kashmir and across India, this is now becoming more and more difficult to suppress. Hiding the protests of Kashmiris is thus important.

However the Washington Post video report of 23rd August exposes these lies. With the help of fact checkers, this brief but comprehensive report proves that footage of protests coming out of Kashmir is new. Hindutva government of Narendra Modi has imposed a complete black out of news and communications on Kashmir. Not only Internet but phone land lines are completely shut down making it impossible for families from outside Kashmir to get in touch with their loved ones. Yet, Kashmiri protesters are sending out videos to the world outside to let the world know their plight inside what can now be described as a ‘maximum security prison”.

Ever since the Narendra Modi-led extremist Hindutva government in India scrapped the autonomous status of Kashmir on August 5, the valley has been under continuous curfew and lockdown with number of troops from India continuously surging. Only government officials entrusted with law and order duties have permits to move on streets.

However, the Modi government has been even more energetic in propagating that not only is the valley calm after the move, but people are actually happy at the change in status of Kashmir. In the past few days, police and administration officials, have been paraded on tv to tell the world that things are normal.

Yet when India’s mainstream opposition leaders, lead by Congress ex-President, Rahul Gandhi arrived at Srinagar AirPort on the invitation of Kashmir’s governor, Satya Pal Malick, they were detained and were forced to return back to Delhi. Rahul Gandhi, great grand son of India’s first prime minister, Pundit Nehru, and grand son of Indira Gandhi, has questioned, in his tweets, that if things are normal then why the Modi government is afraid to let the mainstream leaders to see that normalcy.

It's been 20 days since the people of Jammu & Kashmir had their freedom & civil liberties curtailed. Leaders of the Opposition & the Press got a taste of the draconian administration & brute force unleashed on the people of J&K when we tried to visit Srinagar yesterday. pic.twitter.com/PLwakJM5W5— Rahul Gandhi (@RahulGandhi) August 25, 2019

Immediately after the legislation, Prime Minister Modi had tweeted that a ‘new dawn’ was awaiting the people of Jammu and Kashmir. Modi’ appears to be using a “development cover” to change Kashmir’s population demographics. This explains the ending of 35-A. Article 370 had been gradually eroded and lost its real significance. It was now mostly cosmetic. 35-A had real meat; it was part of Kashmir legal arsenal from the days of Maharaja Hari Singh; it evolved as a law between 1912 and 1932.

Article 35-A was initially carved out to protect the economic and professional interests of Kashmir’s Hindu pundits who occupied lucrative administrative positions and were worried on the influx of Punjabi Muslims who were arriving in large numbers to seek jobs in Kashmir. Before India constructed Banihal Tunnel system, land access to Kashmir existed only through the Pakistani Punjab. After the 1947-48, Indo-Pakistan war on Kashmir and its controversial accession with India, 35-A was retained on insistence of Sheikh Abdullah to protect Kashmiri population from the influx of job seekers from India. Now, from what has reached GVS editors so far, it looks that Modi’s real goal is to flood Kashmir by migrant labours from across India in the name of development. This explains the abrogation of 35-A that did not allow outsiders property rights in Kashmir.

I salute my sisters and brothers of Jammu, Kashmir and Ladakh for their courage and resilience. For years, vested interest groups who believed in emotional blackmail never cared for people’s empowerment. J&K is now free from their shackles. A new dawn, better tomorrow awaits!— Narendra Modi (@narendramodi) August 6, 2019

Modi is now making international trips to engage world leadership to soften the strong reaction that is emerging from influential publications like New York Times, Washington Post, Guardian, Foreign Policy, Al Jazeera, Stratfor and others. Indian Ministry of External Affairs is working hard across Middle East expediting previously pending awards for Modi to send message to Kashmiris and Pakistanis that Muslim world approves Modi’s actions in Kashmir – and that Muslims at large do not care for Kashmiri or Indian Muslims.
Read more: “Time to teach Modi’s India a lesson”: Imran Khan

In reality the “Order of Zayed” conferred by UAE and similar award by Bahrain were announced in April before the Indian elections. The new reality in Kashmir is slowly sinking in across the world capitals. Modi is now in France attending G-7 Summit; though India is not a member of G-7, but Indian Ministry of External Affairs (MEA) has managed a special invitation for Narendra Modi so that he does not look isolated at this stage.

While the Indian government insists all is okay in the valley, Kashmiris continue to brave unprecedented clampdown to show resilience. Protests have burst out all over Kashmir, especially on Fridays – after the prayers. As a communications blackout remains in place to hide the reaction of Kashmiri people, this new report by Washington Post has exposed the blatant lies that “all is okay”.

Washington Post’s report makes it clear that the curfew and communications blackout was placed in fear of a strong retaliation from the residents of Kashmir on the revocation of article 370. The report also clearly says that contrary to government claims, schools and colleges remain closed.

Failing to curtail the protests, the Modi government is making sure that no protests get reported. But videos continue to find their way onto social media. Fake and old footage is also being used, by Indian agencies, to decry protests as non-existent.

However, fact checkers, of Washington Post, have pointed out that the existence of banners against abrogation of Article 370 prove that the videos show latest protests. Kashmiri protesters, resilient as ever have started writing the date of the protest on their banners to defeat the misinformation machinery of the state.

Washington Post correspondents mince no words in saying that there is high level of resentment and anger against the unilateral action of the Indian government. The report concludes that the evidence of discontent in Kashmir really is irrefutable, no matter what the Indian government does to deny it.