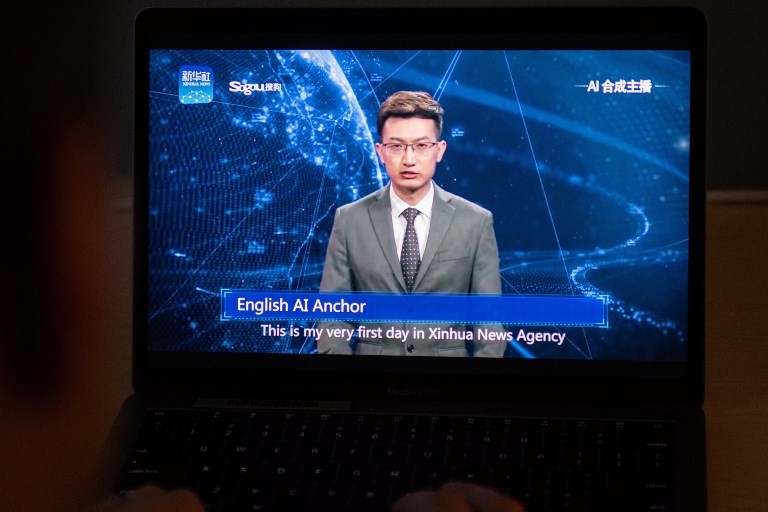 China’s state-controlled news broadcasters have long been considered somewhat robotic in their daily recitation of pro-government propaganda and a pair of new presenters will do little to dispel that view.

Calling it a “world first”, Xinhua news agency this week debuted a pair of virtual news anchors amid a state-directed embrace of advanced technologies such as artificial intelligence (AI).

Based on the appearances of two flesh-and-blood Chinese news presenters, the computerized avatars read out text that is fed into their system, their mouths moving in tandem with the reports.

The avatars debuted this week during the World Internet Conference, an annual convention in the eastern Chinese city of Wuzhen organized by China’s government.

Xinhua said the “AI Synthetic Anchors”, one for Chinese and one for English news, were developed along with Sogou Inc, a Beijing-based creator of search engines and voice-recognition technology.

China last year unveiled plans to become a world leader in AI and other high-tech fields, though it has since toned down the rhetoric amid a trade war with the United States, which has included accusations by President Donald Trump that China steals US technologies.

The digital anchors offer certain advantages over humans, Xinhua said, such as being able to work 24 hours a day and to quickly disseminate breaking news.

“The AI Synthetic Anchor has officially become part of the Xinhua reporting team. He will work together with other anchors to bring you authoritative, timely and accurate news and information in Chinese and English,” Xinhua said.

The anchors have appeared on some Xinhua online and social media products, but it was not immediately clear how extensively they would be used by the agency.

Rather than true AI, however, the Xinhua presenters merely react to text that is fed into their systems, the agency said. True AI involves machines that can think, make decisions and take action on their own.

The avatars debuted this week during the World Internet Conference, an annual convention in the eastern Chinese city of Wuzhen organized by China’s government.