A statue of Christopher Columbus, hailed as the founder of the New World, was beheaded in Boston by unidentified people. This has received support from American society, as it looks to rethink its racist history. 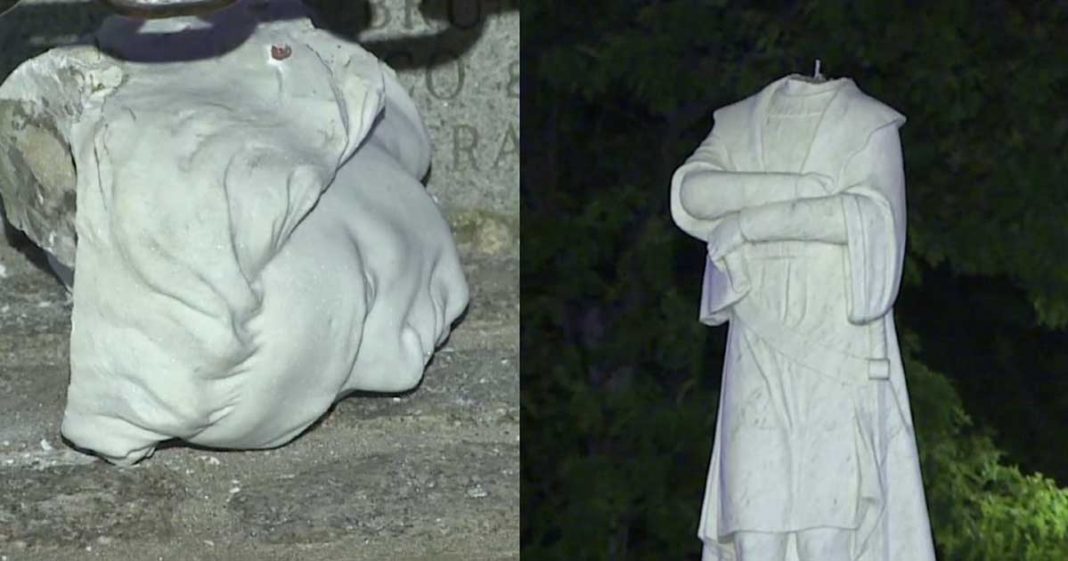 A statue of Christopher Columbus in Boston has been beheaded, police said Wednesday, as calls to remove sculptures commemorating colonizers and slavers sweep America on the back of anti-racism protests.

A Columbus statue was also vandalized in downtown Miami, and another was dragged into a lake earlier in the week in Richmond, Virginia, according to local reports.

The incidents come as pressure builds in the United States to rid the country of monuments associated with racism following massive demonstrations over the killing of George Floyd by a white police officer in Minneapolis last month.

Italian explorer Columbus, long hailed by school textbooks as the so-called discoverer of “The New World,” is considered by many to have spurred years of genocide against indigenous groups in the Americas.

He is regularly denounced in a similar way to Civil War generals of the pro-slavery South.

The Boston statue — which stands on a plinth in the heart of town — has been controversial for years, like other Columbus statues across the US, and has been vandalized in the past.

Boston police were alerted to the damage shortly after midnight on Tuesday, a spokesman told AFP. An investigation is underway but no one has been arrested, he added.

A jogger running past the statue Wednesday said she approved of the decapitation.

“Coming out of the Black Lives Matter protests, I think it’s a good thing to capitalize on this momentum,” she told AFP, without giving her name.

“Just like black people in this country, indigenous people have also been wronged. I think this movement is pretty powerful and this is very symbolic,” she added.

A statue of Christopher Columbus in Boston was beheaded amid protests.

City officials say they will now consider taking down the statue permanently. pic.twitter.com/sD4pqJY5NY

Dozens of American cities have over the years replaced “Columbus Day” in October — which became a federal holiday in 1937 — with a day of tribute to indigenous peoples.

But not Boston or New York, which have large Italian-origin communities.

Boston’s mayor Marty Walsh condemned the beheading but added that the statue would be removed on Wednesday pending a decision about its future, local media reported.

Protesters also defaced a Miami statue of Columbus at a waterfront park with red paint and messages that read “Our streets,” “Black Lives Matter” and “George Floyd,” before police made several arrests, according to the Miami Herald newspaper.

In Virginia, protesters used ropes to pull down the eight-foot (2.44-meter) statue and then dumped it in a nearby lake Tuesday, the Richmond Times-Dispatch said.

It echoed an incident in Bristol, England, on Sunday when demonstrators toppled a statue of a slave trader and dumped it in a harbor during anti-racism protests.

Racism in the United States: an endemic

Racism in the United States has its beginnings rooted firmly in the slave tradition, a practise that was not outlawed by the founding fathers, and which subsequently prompted many constitutional crises.

White slave owners used to import slaves from Africa, who were wholly black people. Slave owners used to keep them on their estates, and subject them to back breaking work; in exchange, slaves were given shelter, food and clothes. They were not paid any monetary compensation.

The Northern States, led by President Lincoln, succeeded in defeating the Southern States (the Confederacy) and subsequently passed the 13th, 14th and 15th amendments which outlawed slavery.

However, despite the progress, blacks were still seen as inferior beings, and many of them were deprived of education and were subject to strict segregation, even in the 20th century.

The United States has witnessed many Civil Rights movements, the most famous being the one spearheaded by Revered Martin Luther King Jr. which galvanized the black anger into a formidable force and managed to secure much more ground for the black people.

Currently, the United States in undergoing severe unrest, prompted by the police killing an unarmed black man, which is a manifestation of the deep rooted grievances of Black Americans toward the system.

Previous articleAustralia not intimidated by China threats: PM
Next articleHSBC under fire in UK for its stance on Hong Kong

23 July 2021
Previous articleAustralia not intimidated by China threats: PM
Next articleHSBC under fire in UK for its stance on Hong Kong

Aleppo at risk of becoming ‘one giant graveyard’