In the meeting, the top general has emphasized that the students must continue to work hard and contribute towards prosperous and progressive Pakistan and become a useful part of society. 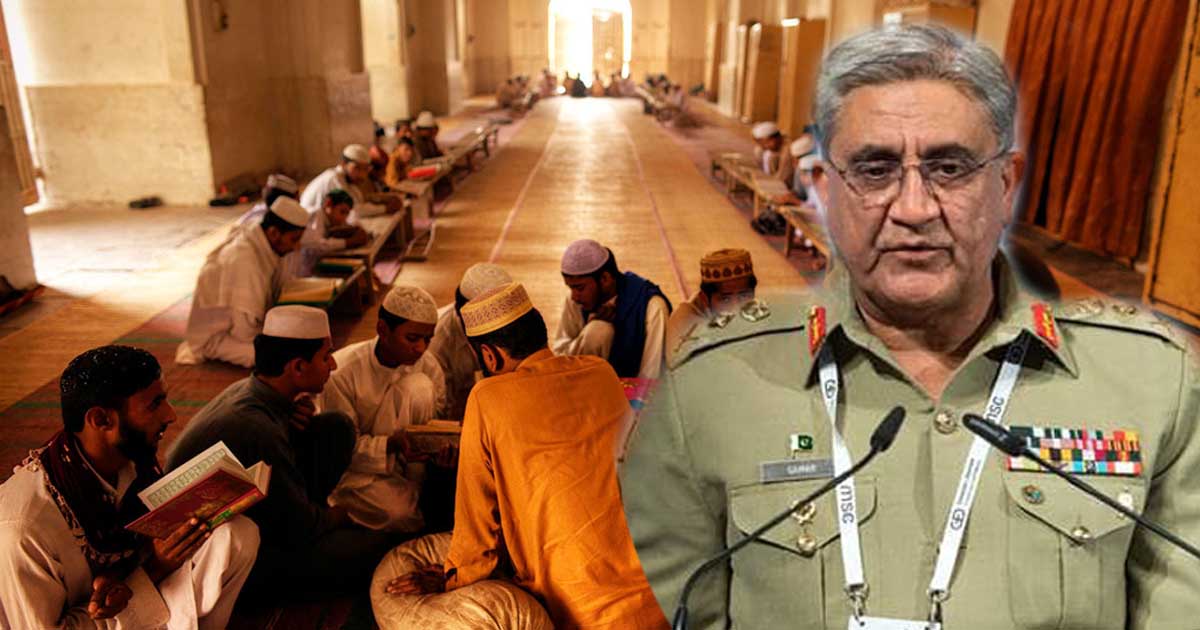 Chief of Army Staff (COAS) General Qamar Javed Bajwa has lauded that the ongoing efforts to bring madrassahs into the mainstream national education system as it would open new avenues for the students to excel in their careers.

In a meeting at the General Headquarters in Rawalpindi with the students of the Ittehad-e-Tanzeemat-e-Madaris Pakistan (ITMP), who secured good grades in the Intermediate exams, the army chief congratulated the students for securing positions in various disciplines.

In the meeting, the top general has emphasized that the students must continue to work hard and contribute towards prosperous and progressive Pakistan and become a useful part of society. General Bajwa lauded the efforts and commitment of the parents and teachers to provide right environment to the students and help them achieve such distinctions.

According to the Inter-Services Public Relations (ISPR), total 13 students, including four girls, achieved top positions in various board exams this year. Later, the COAS distributed prizes among the high achievers and souvenirs to parents and teachers in recognition of their efforts.

On April 29, ISPR’s Director General Major General Asif Ghafoor had talked about seminary reforms in the country. During the press conference, the military spokesperson had spoken on the tensions between India and Pakistan in the wake of Pulwama attack, India and Afghanistan’s funding to PTM, Kashmir issue, security matters and action taken against proscribed organizations.

It was then the DG had famously said that India must not test Pakistan’s resolve as it was not 1971, adding neither the army nor the circumstances were the same anymore. Mainstreaming Madrassahs: Army aims to create equal opportunities for madrassah students.

While referring to 25 million out-of-school children, the DG had said that these children then go to the 30,000 madrassahs that exist in Pakistan at the moment. He had revealed that less than 100 out of the total madrassahs were found to be the kind that were pushing children towards extremism.

“So out of 30,000 only 100 are faulty and if these were shut, what will happen to the millions of children who go to these madrassahs,” he had questioned, adding that the madrassahs offer eight years of studies in a Dars-e-Nizami with two additional years to give them the title of a Mufti.

“But when these children come out of these madrassahs, what job opportunities await them,” he had asked. He had maintained that some of the madrassahs do offer some contemporary education but very few of these children qualify for some basic level jobs, like procuring a commission in the army.

Elaborating further, he had said that the effort would require funding to employ teachers in these madrassahs, adding that shortage of funds was an issue in the past but now when the war against terror is coming to an end, it was possible to reroute the funds towards this process.

Read more: How to tackle radical madrassas in Pakistan

Previous articleIs dark chocolate one of the ‘skinfoods’?
Next articleBJP adds 23,000 new members during a drive in Kashmir Valley

30 July 2021
Previous articleIs dark chocolate one of the ‘skinfoods’?
Next articleBJP adds 23,000 new members during a drive in Kashmir Valley

Women flogged for adultery in Indonesia

Pervez Musharraf cries of ‘Personal Vendetta’ at work in his case

Ashraf Ghani to visit Pakistan: Can we expect better Af-Pak ties in the near future?