Senior journalist, Anchor, and Chief Editor at ‘HUM News’ narrates the journey of the deadly Corona Virus into Pakistan. He evaluates federal and provincial government’s responses given their limited resources to tackle the pandemic.

In Pakistan, the coronavirus has been transformed into an issue for political point-scoring between the political parties. Unlike China, the Pakistani government has to tread carefully due to social, cultural and religious sensibilities over many issues. Such sensibilities are not present in China, where the government has the ability to bulldoze decisions in the larger public interest.

Arrival of the Pandemic

It was Wednesday, February 26, when Dr. Zafar Mirza, Special Assistant to the Prime Minister on Health, officially reported the first two cases of coronavirus (COVID-19) in Pakistan.

“I can confirm the first two cases of coronavirus… Both cases are being taken care of according to clinical standard protocols & both of them are stable…,” he tweeted, promising to hold a press conference the next day on his return from Balochistan’s remote border region of Taftan, where he had gone to review quarantine facilities for Pakistani pilgrims or “zaireens” coming back from Iran.

One of the coronavirus patients was from Karachi, while the other was from Islamabad. They had both recently returned from Iran – one of the worst coronavirus-hit countries in the region. By the time Pakistan announced its first COVID-19 cases, 48 other countries had already reported this pandemic.

The rising death toll and rampant spread of this virus had forced the World Health Organisation (WHO) to declare a global emergency as early as on January 30th – exactly a month after China alerted it about the “unusual pneumonia” in its port city of Wuhan in the central Hubei province. 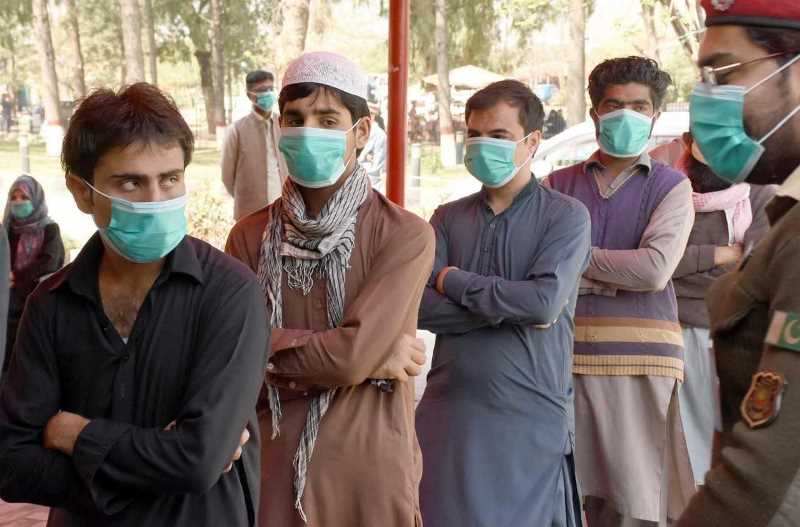 Since the outbreak of this virus in China in December 2019, and its rapid spread to other countries, Pakistani authorities had been keeping their fingers crossed as one regional country after another confirmed COVID-19 patients.

“We were lucky that no coronavirus case was reported in Pakistan in the initial six to seven weeks after China went public about it. This gave us some vital time to prepare,” said a Federal Health Ministry official in a background interview. The official claimed that the Federal Health Ministry began preparing Pakistan to face coronavirus on January 17 – a few days after the epidemic went viral in Wuhan.

The first advisory was issued on January 23, to all the provinces and soon after screening at airports started, an emergency operation cell established to fight the pandemic. He further spoke, “In less than a week after the outbreak of the virus in China, we established our first diagnostic laboratory in Pakistan.

And by March 28, the number of labs where coronavirus can be tested grew to 14…Health Ministry developed vital SOPs (standard operating procedures), guidelines and national action plan… worked out details on how to screen suspected cases and quarantine as well as isolation wards’ procedures.”

Despite the intense pressure from families, the government took the right decision by not allowing the Pakistani students studying in Wuhan to return to the country, which delayed the arrival of this virus. But then the ‘Taftan crossings’ happened, which were beyond the control of the federal as well as the provincial Balochistan governments.

According to a Balochistan government official, who spoke on the condition, the Iranian government did not cooperate with Islamabad on screening and quarantining the zaireen returning to Pakistan via Taftan.

He exclaimed, “Even Balochistan Chief Minister Jam Kamal spoke to Iran’s ambassador to Pakistan, but Iranian authorities themselves were so bogged down because of the pandemic that they just put exit stamps on passports of Pakistani visitors and pushed them to the border.”

It was a difficult choice. Unlike China, where Pakistani students were taken care of by the authorities, in Iran, stranded Pakistanis were in a very difficult position. They had nowhere to turn, the Balochistan, and the Iranian position is understandable… they lack resources to help ‘zaireen’, he explained.

Many opposition politicians and their allied media have been demanding Prime Minister Imran Khan to rush through decisions, which were deemed staggered, and being implemented in phases keeping in view the country’s socio-economic realities

“Iran pushed more than 1800 ‘zaireen’ from Taftan on the first day when the border reopened and then hundreds more the next and then more… within three days the number swelled to more than 4,600,” the official said.

The remote desert border crossing of Taftan – located 632 kilometers from the provincial capital Quetta – has only one building — ‘the Pakistan House’ — which accommodates a maximum of 300 to 400 people. The nearest Basic Health Unit from Taftan is located at a two-hour drive in Dalbandin – the district headquarters.

“Taftan is an isolated, remote place … yet, we managed to move a mobile laboratory there, transported 100 temporary toilets, erected a tent town and ensured food supplies and other basic necessities… what else could any country do on such short notice in such a remote place… even (the United States) America couldn’t have done more, but to bring tents over there,” the Balochistan official said.

However, managing ‘zaireen’ became a problem, according to multiple sources. “Zaireen refused to cooperate. They were desperate to go their homes… they uprooted tents, damaged facilities and threw away the food and blocked the main road,” said another federal Health Ministry official.

The Balochistan Government official clarified that initially, no other province came for the help of people belonging to their areas. After the unruly episode in Taftan, Balochistan authorities then slashed the period of stay there and started sending Zaireen to their respective home provinces in buses, along with security guards so that they do not escape during the journey.

Read more: COVID-19: Has it attacked our brains?

As quarantine facilities were established in the home provinces of Zaireen, there was resistance by them to being quarantined, and they tried to escape and created problems. Balochistan and the Federal Health Ministry officials admit that Pakistanis returning from Iran, overwhelmingly, remain responsible for the spread of coronavirus in the country.

“There are thousands of Pakistanis still in Iran including students, dual nationals and zaireens … the problem for us is far from over as one coronavirus patient has the potential to inflict this disease to hundreds of others,” the Balochistan Government official said.

In Pakistan — where health facilities are already weak, stressed and limited — fighting coronavirus-type epidemic becomes a Herculean task because of social attitudes, flawed understanding of religion and non-cooperation from many citizens. China effectively fought the crisis because it is a regimented, disciplined society and the government of the country bulldozes decisions in the larger public interest in the shortest possible time.

But that would be impossible in Pakistan, where even coronavirus has been transformed into an issue for political point-scoring. Thus, the government has to tread carefully because of social, cultural and religious sensibilities. “On a practical level, there is great coordination between the federal government and provinces.

The provinces are doing some great work as per the guidelines and SOPs of the federal ministry, as all the stakeholders know that without cooperation and unity, they can’t defeat coronavirus”, federal health official commented.

Sindh, in the initial phase, where the number of coronavirus cases was the highest, stood out in performance because of its proactive approach and timely decisions, including the closure of educational institutions, partial lockdown and the banning of collective prayers as well as social and political gatherings. Simultaneously or shortly after, similar steps were taken by the other provinces.

Yet, the blame game continues as many opposition politicians and their allied media have been demanding Prime Minister Imran Khan to rush through decisions, which were deemed staggered, and being implemented in phases keeping in view the country’s socio-economic realities.

The criticism was aimed at creating an impression that nothing was done by the federal government, especially the prime minister, said a federal minister, adding that whilst the first meeting of the National Security Committee was convened on March 14, but the Prime Minister was holding consultations and meetings daily since the issue of Pakistani students stranded in China came to limelight in January.

Dr. Zafar Mirza has been leading from the front and is being backed by provinces as well as institutions, he said. The situation is indeed challenging for Pakistan as even many developed countries with all their financial resources, excellent health facilities & infrastructure, scientific advancement and mass literacy could not prevent coronavirus’ rapid spread.

This includes the United States, Britain, Italy, France, and Spain. For Pakistan, the task of fighting coronavirus becomes steeper because of the lack of resources, poor infrastructure, petty politics, and conservative social, cultural and religious attitudes. Despite paying lip service to the cause of unity in the wake of this looming national crisis, politicians played politics and many clerics complicated matters.

Instead of guiding the faithful, many Ulema and maulvis misguided and incited people, which delayed placing a ban on religious assemblies, including congregations in the mosques. When the decision was announced by Sindh Government on March 26, many clerics and their followers refused to comply.

Several stalwarts in the electronic media sensationalized the issue as they pushed various political and personal agendas based on half-truths and shady information. However, this does not mean that the challenge of coronavirus is any less dire for Pakistan. As there has been a rapid increase in cases since early March.

Coronavirus has all the potential to become one of the deadliest health crises for the country. The government will have to act diligently to slow down the spread of the crisis and manage its economic fallout due to the mass lockdown, and the halt of major economic and production activities.

Unfortunately, there is no easy way out. The government needs all the support of provinces, political parties, social media influencers, opinion-makers, and the media to fight the pandemic.

Pakistanis have to act responsibly on both an individual and collective basis, and support the government’s efforts aimed at halting the spread of the deadly virus. Our collective conscience is the best weapon against this pandemic. But as citizens, are we up to the challenge?

Amir Zia is a senior journalist who has worked for leading national and international media organizations, including Reuters, AP, Newsline, SAMAA, and The News. Currently, he is working for Hum News as its Chief Editor.

Previous articleWhat is COVID-19? Here’s all you need to know
Next articleA collective response must for tackling malnutrition in country

No video will be found from stolen phones of Imran Khan: Shahbaz Gill

16 May 2022
Load more
Previous articleWhat is COVID-19? Here’s all you need to know
Next articleA collective response must for tackling malnutrition in country

When will we stop believing in Coronavirus conspiracy theories?