Corona pandemic is a gift of neoliberal economics?

Why the world failed to control a Corona Pandemic? Author expands upon Noam Chomsky's argument that savage neoliberal intensification of deep socio-economic problems is responsible for the failure. Interesting! Provocative!

First of all, it makes sense to realize that the COVID-19 just did not hit the world from out of the blue. In fact, according to a research article ‘Coronavirus: a paradigm of new emerging zoonotic diseases’ which was recently published in February 2020, it was indicated that the challenge of coronavirus, and its possible blowout into an epidemic, was well on the radar of public health sector, for almost two decades now.

According to the article, ‘Until 2002, CoVs [coronaviruses] were considered minor pathogens for humans, generally associated to common cold or mild respiratory infections in immunocompetent people, with rare exceptions represented by severe infections in infants, young children and elder people (Channappanavar and Perlman 2017).

This concept completely changed with the emergence of a highly pathogenic zoonotic disease [that is transmitted from animal to humans], the Severe Acute Respiratory Syndrome (SARS) caused by the SARS-CoV.’

Those governments could not formulate a timely and needed response in the shape of an economic and associated health policy did not work towards meeting this challenge is sad to say the least. The reason why this happened is very well outlined by the world-renowned social scientist and thinker, Noam Chomsky recently in these words: ‘We should think about the emergence of this crisis: why is there a coronavirus crisis? It’s a colossal market failure. It goes right back to the essence of markets exacerbated by the neoliberal, savage neoliberal intensification of deep socio-economic problems.’

Pandemics of corona viruses were likely – but ignored

It was known for a long time that pandemics are very likely and it was understood, very well understood, that they are likely to be coronavirus pandemic, out of a slight modification of the SARS epidemic fifteen [roughly eighteen] years ago. In time it was overcome. Now the viruses were identified, sequenced, vaccines were available, labs around the world could be working right then on developing protection for potential coronavirus pandemics.

Why didn’t they do it? The market signals were wrong. The drug companies we have handed over our fate to private tyrannies, called corporations, which are unaccountable to the public, in this case big pharmaceutical. And for them, making new body creams is more profitable than finding a vaccine that’ll protect people from total destruction.

It would have been possible for governments to step in; going back to War-time mobilization, that’s what happened. Polio at the time, and I can remember very well, was a terrifying threat; was ended by the discovery of the Salk vaccine by a government institution, set up by the Roosevelt administration. No patents, you know, available to everyone.

Governments everywhere need to take centre-stage; and influence markets with incentives that allow reaching rational profits, but in no way at the cost of needed overall socio-economic goals

That could have been done this time, but the neoliberal plague has bogged that. We’re leaving under an ideology, for which economists have a good bit of responsibility. So it comes from the corporate sector, an ideology that is typified by a Ronald Regan reading a script handed to by his corporate masters, with his sunny smiles saying: government is the problem. Let’s get rid of government, which means lets hand over decisions to private tyrannies that are unaccountable to the public…

The point is that this coronavirus pandemic could have been prevented. The information was there, and in fact it was well known in October 2019, just before the outbreak there was a large-scale simulation… that a possible pandemic of this kind. Nothing was done. Rather the crisis was made worse by the… treachery of the political systems, which didn’t pay attention that they were aware of.’ Furthermore, Chomsky indicates that not many countries responded quickly and appropriately even after the knowledge of the virus was out there around the start of the current year.

Neoliberalism has not worked for the public at large, and in fact only for a handful of politico-economic elites everywhere. The fallout of this has only perpetuated ‘Profit over People’ as Chomsky puts it as one of the titles of his books from many years ago, but which is unfortunately still very relevant, as the extreme lack of preparedness of governments virtually globally with regard to coronavirus pandemic, highlights.

In fact, Chomsky further highlights as the main reason for a lack of response to matters important to the public at large, and specifically with regard to coronavirus as ‘The point is we started again with a colossal market failure, pointing to fundamentals problems in the socio-economic order, made much worse by the neoliberal plague, and it continues because of the collapse of kinds of institutional structures that could deal with it if they were functioning.’

Governments everywhere need to take centre-stage; and influence markets with incentives that allow reaching rational profits, but in no way at the cost of needed overall socio-economic goals. Economic policy needs to understand this, and neoliberal economics that raged into action at the back of corporate interests dominating public policy, through primarily funding election campaigns and political parties in a big way in many parts of the world – both developed and developed countries – needs to be replaced by a brand of democracy that is based on a little role of money for its functioning, and a lot more on the aspirations of the interest of public at large.

The relationship between election outcomes and public aspirations needs to be restored, and through ensuring a vote that is influenced only by public interest, and that is based entirely on the strength of expression of vote.

Central banks should look to purchase emerging-market bonds (like the one suggested here in the shape of corona bond), under the overall quantitative easing effort

While this should be the goal going forward for economic policy in the medium to long-term, in the very short-term, the biggest challenge being faced by the developing countries in particular, is a) finding resources to bridge the huge ‘funding gap’ to keep afloat not only the aggregate demand side – especially providing direct cash transfers and other fiscal benefits to the daily-wagers and people working in the formal sector, and which is a big chunk of the overall labour market in developing countries – and also the aggregate supply side, both of which are suffering acutely as the days turn into weeks, and God forbid, into months.

The current stimulus package is fine to start, with but needs are far more, and a lot financing will have to be arranged as time passes. In this regard, to be better prepared and to reduce anxiety among masses, the Government of Pakistan should make a quick assessment of the funding gap – and make it public – needed to provide appropriate support on both the aggregate demand and supply sides, especially of those below and around the poverty line. At the same time, it should make multiple assessments of funding gap for short-to-medium terms in terms of months for instance.

Moreover, it should map all available and possible financing sources, including launching a ‘Corona Bond’ of the nature of medium to long-term tenor, so as to tap external financing. Raising domestic financing will also be an issue and here too it could make sense to lower policy rate around half of where it is, especially when inflation is also likely to drop significantly in the wake of sharp decline both on the aggregate demand and supply sides, including international energy and commodity prices.

Read more: How Has Covid-19 Affected The World?

This will free-up a lot of fiscal space for government in terms of interest payments, and also for the loan payments for industry, putting them in better circumstances to not lay-off their employees. At the same time, this will still not risk the danger of discouraging investment into the proposed corona bond, since interest rates internationally are near or around the zero-mark currently, especially in developed countries. Pakistan’s risk rating has been improving for some time, and this should also help in raising funds from these bonds.

Ricardo Hausmann, a former planning minister of Venezuela, and currently a professor at Harvard University highlights ‘while two academic communities – public-health experts and macroeconomists – are starting to talk to each other, unfortunately the conversation has mostly involved only the advanced countries… Unlike the 2008 global financial crisis, which led to a collapse in demand, the COVID-19 pandemic is first and foremost a supply shock… Most developing countries rely for foreign income on a combination of commodity exports, tourism, and remittances: all are expected to collapse, leaving economies short of dollars and governments short of tax revenues.

At the same time, access to international financial markets has been cut off as investors rush to the safety of US and other rich-country government-issued assets. In other words, just when developing countries need to manage the pandemic, most have seen their fiscal space evaporate and face large funding gaps… To help manage the pandemic in the Global South, therefore, it is critical to recirculate the money that is fleeing the developing countries back to them. To do that, the G7 and the G20 should consider several measures.’

In terms of the possible policy options available for economic policy, IMF points out the following in an IMF blog titled ‘Economic policies for the Covid-19 war’

The measures that he suggests include, among others, firstly, the US Federal Reserve should extend its announced policy of putting in place swap lines to include more countries and not just not just a couple of mostly developed countries, whereby it may think of intermediating funds through International Monetary Fund (IMF) to reduce the risk of default. For this it may make sense that the IMF redesigns its Rapid Financing instrument.

Secondly, central banks should look to purchase emerging-market bonds (like the one suggested here in the shape of corona bond), under the overall quantitative easing effort. Thirdly, ‘developed countries should not – as the European Union unfortunately has just done – impede or prohibit exports of tests, pharmaceuticals, and medical devices.

In terms of the possible policy options available for economic policy, IMF points out the following in an IMF blog titled ‘Economic policies for the Covid-19 war’: 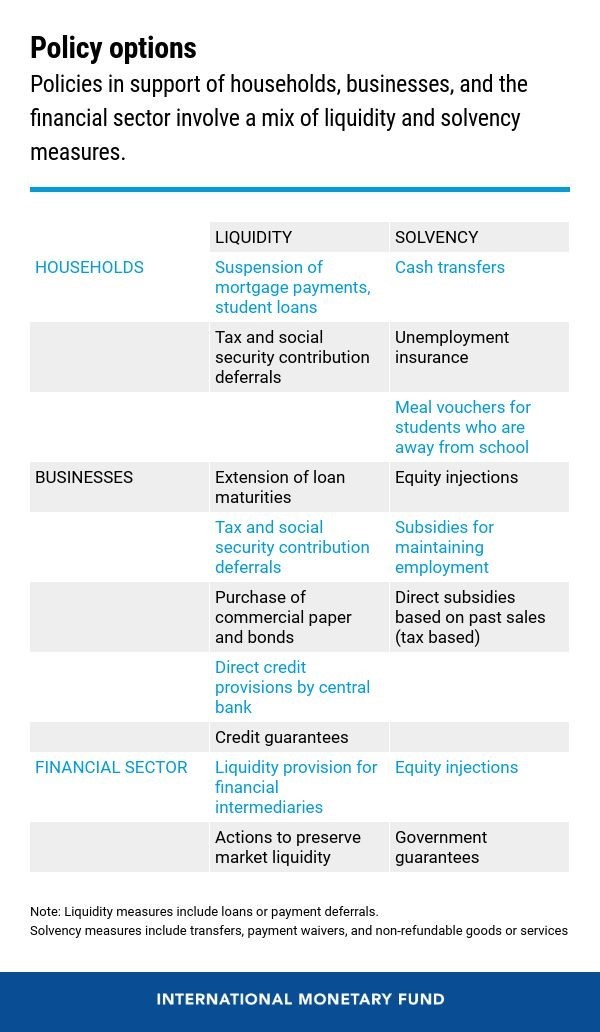 On the other hand, fiscal stimulus and filling the funding gap would likely exacerbate the already the difficult external debt situation of the developing countries. For this it is very important that large-scale debt moratoriums and even write-offs are announced, especially for developing countries, by the multilateral and bilateral donors.

In this regard, according to Project Syndicate, Jayati Ghosh, who works at the Jawaharlal Nehru University ‘calls for coordinated debt resolution and restructuring in order to prevent any eventual recovery in developing Asian economies from being derailed by unresolved financial and debt crises.’

Dr. Omer Javed is an institutional political economist, who previously worked at International Monetary Fund, and holds a Ph.D. in Economics from the University of Barcelona. He tweets at @omerjaved7. This article originally appeared at Business Recorder and has been republished with the author’s permission. The views expressed in this article are the author’s own and do not necessarily reflect the editorial policy of Global Village Space.