As Pakistan’s macroeconomic situation deteriorates, this summer will feature a moment of reckoning, as both the caretaker and new government will not only be forced to make difficult policy decisions but will also likely have to revisit Islamabad’s approach toward the China-Pakistan Economic Corridor (CPEC).

Pakistan’s current account deficit is widening as foreign exchange reserves decline, the fiscal deficit is growing, debt repayment obligations are rising, and the circular debt is ballooning. There is no indication that these trend lines will reverse before the year’s end.

Pakistan could have no other option but to return to the International Monetary Fund to shore up its forex reserves and repay external debt. Exports have improved each month in fiscal year 2017-18 compared to the corresponding month in 2016-17. Comparing the two respective eight-month periods, exports grew by 11.66 percent.

Beijing has done its due diligence. Chinese state-owned companies will come out in the green, but it’s not clear that the same can be said for Pakistan.

But the rise in exports is outpaced by the rise in imports at 17.19 percent, fueled by machinery imports and the surge in the price of imported oil and liquefied natural gas (LNG). With OPEC agreeing to continued production cuts and ongoing trouble in Venezuela, the price of oil is expected to rise further this year.

The effects for Pakistan will be beyond oil as the price of LNG imports are pegged to Brent crude oil. As a result, the pro-export interventions of the post-Ishaq Dar economic leadership are likely too little too late. To be clear, Pakistan’s economy is growing. The GDP growth rate is projected to be near six percent this fiscal year.

But economic growth under the Pakistan Muslim League – Nawaz (PML-N) government has mainly been driven by consumer demand and domestic spending. Another effective devaluation of the rupee may further boost exports and inhibit luxury imports.

But the combination of rising energy prices, externally-imposed austerity measures, and growing inflation will dent domestic consumption and perhaps even slow overall economic growth. There is the danger that Pakistan could be in the midst of another “boom-bust” cycle, with the “bust” end of the cycle nearing as the macroeconomic situation becomes untenable.

CPEC was envisioned as a means to overcome the boom bust cycles that have prevented Pakistan from experiencing the same extended periods of large-scale economic growth akin to the Asian Tigers, China, India, as well as Bangladesh and Vietnam. The Pakistani economy was hit by a perfect storm of terrorism, political instability, the global economic crisis, and epic floods in the 2007-2011 period.

Moreover, shortages in electric power and poor infrastructure have also held back economic growth. The short-term goal of CPEC was to address these challenges head-on and also encourage foreign direct investment in value-added industries. 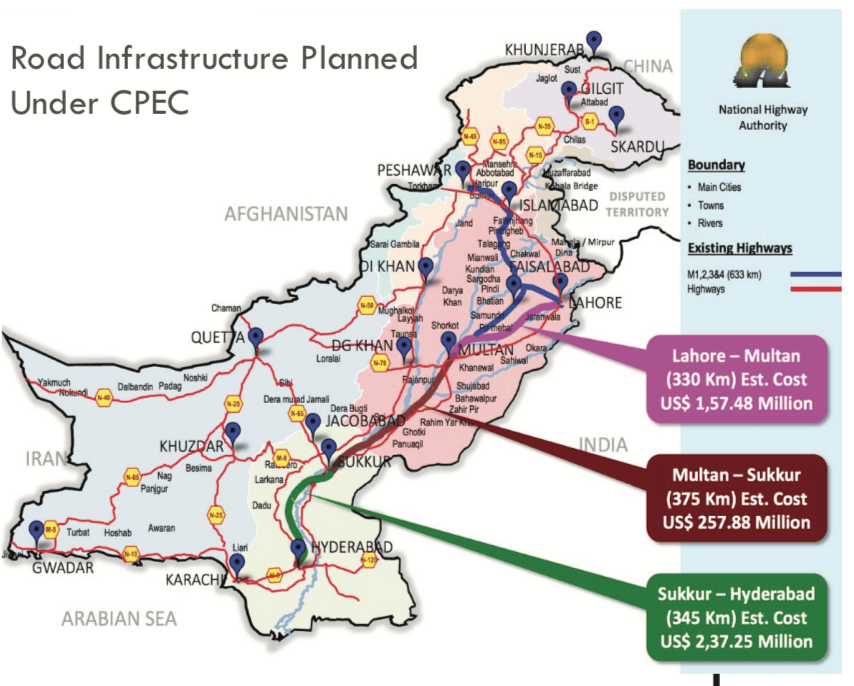 The PML-N should be commended for pushing forward a critical mass of electric power projects. The Port Qasim and Sahiwal coal power projects, for example, were up and running 6-12 months earlier than is usual for such projects.

It is clear that when Punjab Chief Minister Shahbaz Sharif wants a project to be completed, he wills it into fruition. That is by no means a sustainable way of governing a province of 90 million, let alone a country of 200 million. But in a country replete with talkers, he is a rare doer.

As the purse strings tighten, it’s clear it would make more sense to give priority to projects that would provide the most immediate benefit to export industries.

With that said, it is now clear that the PML-N federal government has been woefully deficient in terms of planning and project prioritization. Though the CPEC project portfolio largely consists of projects that have been mulled over the past few decades and generally conforms to Pakistan’s own planning for energy sector reform and infrastructure network development, it is the Chinese who seem to have played a lead role in conceiving the long-term CPEC plan and the Gwadar masterplan.

Beijing has done its due diligence. Chinese state-owned companies will come out in the green, but it’s not clear that the same can be said for Pakistan. Pakistan’s rising import bill is attributable to a large degree to CPEC-related machinery imports. While these imports are aimed at improving productivity, Islamabad should have coupled them with immediate policy measures to support a corresponding rise in imports.

Unfortunately, that only began meaningfully toward the middle of last year once Ishaq Dar (who withheld rebates for textile exporters) was out of the picture. With cuts in development spending likely, it’s also clear that on top of the implementation of the textile industry support package, the PML-N government should have prioritized CPEC and non-CPEC infrastructure spending that would catalyze exports and transit trade in the near term.

Misplaced priorities over determination of short-term and long-term projects

The largest single current road project part of the CPEC portfolio is a segment of the Karachi-Lahore Motorway. By 2020, Peshawar, Islamabad, and the largest cities of Punjab and Sindh will be connected by a controlled-access highway network that will reduce the transit time between Karachi and Lahore by 50 percent.

Though the CPEC project portfolio largely consists of projects that have been mulled over the past few decades and generally conforms to Pakistan’s own planning for energy sector reform and infrastructure network development, it is the Chinese who seem to have played a lead role in conceiving the long-term CPEC plan and the Gwadar masterplan.

It would have made sense for the federal government to make this bypass a priority and complete it before the Karachi-Lahore Motorway opens. This would directly benefit export industries across the Peshawar-Karachi belt, not just by saving time and fuel costs, but also by making the port an even more attractive transhipment option for countries in the region.

Instead, Pakistan is spending roughly $2 billion on the Karakoram Highway (KKH) realignment. Sino-Pak cross border trade is presently marginal and the border is closed during the winter. Discussion of industries to target to boost cross-border trade has been hypothetical. Similarly, the Gwadar port is a long-term play. It is essentially a Greenfield project that will take years to provide meaningful returns.

To be clear, the money on Gwadar and the KKH is worth spending — but the PML-N’s priorities and sequencing have proven to be off. As the purse strings tighten, it’s clear it would make more sense to give priority to projects that would provide the most immediate benefit to export industries.

Unfortunately, it looks as if the government is unserious about exports and remains content with being an import-based economy perhaps with elements of transit trade. Given recent discussions to expand handling capacity in Gwadar and China’s realignment of its own segment of the KKH, it may be that the Chinese are keen on using the Gwadar-Kashgar land route for transit trade as early as 2019 or 2020.

The returns from Gwadar Port and KKH investments could come sooner rather than later. But the Planning Commission has been cagey in discussions with Pakistanis, including the business community.

More energy: But at what cost?

Expensive energy in Pakistan, as compared to regional competitors, will weaken its export competitiveness. Through CPEC, Chinese state-owned companies have been provided high rates of return (for power projects) and at least $1.35 billion in tax exemptions. Cheap electric power fueled by domestic natural gas has helped make Bangladesh an apparel manufacturing powerhouse.

Coal power projects in Bangladesh with Chinese sponsors include lower upfront tariffs compared to similar ones in Pakistan through CPEC. So, while Pakistan benefits from having sufficient electric power to meet demand, it will be expensive power. Combined with expensive LNG in Punjab, Pakistani textile exporters will struggle to compete with countries like Bangladesh and Vietnam.

The circular debt will also continue to climb. The PML-N could have proceeded at a more moderate pace for initiating electric power projects, coupling them with reforms to reduce transmission and distribution (T&D) losses. But it has been in a race to complete projects before the general elections so as to be able to proclaim an end to load-shedding.

There are many parties within the federal government to blame for Pakistan’s impending fiscal crisis, induced in part by the way CPEC has been approached. The bureaucracy has done a poor job in once again in negotiating the latest round of FTA talks with China, which don’t appear to be ending in Pakistan’s favor.

Special interests in Pakistan are reportedly obstructing natural gas exploration, denying the country an opportunity to fuel its industries on cheap domestic resources. The 18th amendment has made gas more expensive in Punjab, a net gas importer. But the PML-N has abandoned the Pakistan Textile City project located in Port Qasim, though its coastal location and cheaper fuel costs make it a sensible location as textile-oriented export zone.

In particular, the Planning Commission of Pakistan, which is the lead coordinating body in Pakistan on CPEC, has dropped the ball. In conjunction with China’s National Development and Reform Commission, it decides which projects are included as part of the CPEC portfolio. There is little indication that it contributed in a meaningful way to the CPEC long-term plan.

Its CPEC research body, the Center for Excellence, established in 2016, spends an inordinate amount of time on publicity for the Planning Commission’s senior officials. It should be re-staffed with experienced economists and strategy consultants who can not only reengage the CPEC long-term plan but also provide actionable and easily digestible guidance to Pakistan’s business community on how best to leverage the CPEC opportunity.

Arif Rafiq is president of Vizier Consulting, LLC, a political risk advisory company specializing in the Middle East and South Asia, and a non-resident fellow at the Middle East Institute. He is the author of “The China-Pakistan Economic Corridor: Barriers and Impact,” the first comprehensive public study on CPEC, published by the U.S. Institute of Peace.
The views expressed in this article are the author’s own and do not necessarily reflect the editorial policy of Global Village Space.

Magazine Desk - 15 June 2021
Tabish Gauhar explains the key issues underlying the circular debt and what initiatives the government is working on to contain the it.

Economic growth and battle of narratives

Nuclear Power Plants: When a friend came to Pakistan’s rescue

Pakistan’s faithful and Resilient Christians in the face of adversity

Concerns and predictions on CPEC reliance for Pakistan – Dr. Aadil

Zulfi Bhutto: The man and his legend lives on