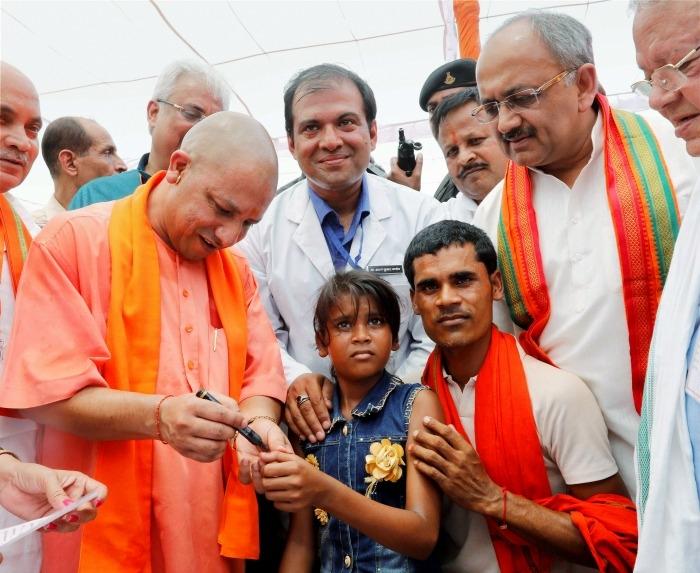 The firebrand Chief Minister of Uttar Pradesh Yogi Adityanath is once again in the headlines as a zealot Hindu. Shockingly residents of a Dalit village in the state were given soap, detergent, and shampoo to ‘clean’ themselves before the Uttar Pradesh CM’s recent meeting with them.

According to the Indian Express, some 100-odd Musahar Dalit families of Mainpur Deenapatti village in Kushinagar district received two bars of soap, ‘Lifebuoy’ and ‘Ghari’ and sachets of shampoo. They were instructed to clean themselves before attending the public meeting with the CM.

“I got the soaps from the Anganwadi women. I didn’t get the shampoo, but others did. I was told to take a bath with the soap before going for the meeting. We already use soap which we buy from the local shop. What’s going to change with just two bars of soap,” Keshri, a villager in her sixties told the Indian Express.

Members of the Musahar Dalit community were surprised when they found senior district officials thronging their otherwise neglected slum in the past couple of days. Toilets were constructed, roads were cleaned and lights were installed within no time.

Musahar Dalit families are the main residents of UP’s Mainpur Deenapatti village in Kushinagar district. The community is set aside and discriminated against for being ‘untouchables’.

Earlier a similar incident took place which involved the CM. Taking the families of the slain BSF constable by surprise when the Deoria district administration installed a window air conditioner, put up a sofa and carpet at their home ahead of chief minister Yogi Adityanath’s visit a few weeks ago. This was not all, for the family was awe-struck when officials took away the amenities back when the CM departed.

Here, too, members of the Musahar Dalit community were surprised when they found senior district officials thronging their otherwise neglected slum in the past couple of days. Toilets were constructed, roads were cleaned and lights were installed within no time.

In all likelihood, the officials did not want the CM to get a “stinking feeling”, something which is reflective of a mindset that is increasingly creeping in the country. The gory incident is repugnant to the public pronouncement of the CM.

Earlier this month in a television show, Adityanath said that there would be no discrimination.

“Law and order is our first priority in the state. Mild incidents have occurred in some places but I am sure about the fact that when my government releases its report card after hundred days, these incidents will stop. All the sisters, daughters, and businessmen will feel secure in the state.”
– CM Yogi Adityanath

The incident is gruesome in more ways than one and goes to show that intolerance and haughtiness are gaining momentum in India. Though intolerance is fast becoming rife in South Asia, such blatant aversion for a particular community has not been witnessed anywhere, even from the ruling elite.

However, officials denied that soaps were given specifically for the meeting with Adityanath which was a part of a cleanliness campaign.

The CM has come under a barrage of criticism from the Congress Party which has demanded an apology.

Addressing the media, Congress spokesperson Abhishek Manu Singhvi said, “Yesterday’s incident at the village of Mushahar community’s gathering has depicted the true face of BJP, the RSS and in particular of their CM. The true face, thought process, thinking, actions are reflected in the way soaps were distributed to the Dalit community by the officials on the instructions of Yogi Adityanath.”

With vigilante on the rise and it being well-inducted into state policies, India faces resistance from the feeble Dalits and the indomitable Kashmiris.

Ever since the rise of Hindutva under the auspices of the BJP, the scheduled castes, known as Dalits, have been subjected to a storm of violence by Saffron terrorists who mostly belong to the upper castes. Recently, violence broke out during the procession of Rajput warrior-king Maharana Pratap in Saharanpur over loud music. In the violence one man was killed, 16 were injured, and 25 Dalit houses were burned. The incident was connected to the ruling BJP MP from Saharanpur Raghav Lakhanpal. Before that, the public brutal beating of several Dalits by Gau Rakhaks in Una during the month of July 2016 unleashed massive Dalit protest movements. Several other cases of violence like lynching, rapes, arson etc against Dalits is widespread and common throughout India.

With vigilante on the rise and it being well-inducted into state policies, India faces resistance from the feeble Dalits and the indomitable Kashmiris. The Indian political establishment has to think through the fervor of Hinduism that is dictating its policies.

Relations beyond the veil: Pakistan, Israel and the Muslim world