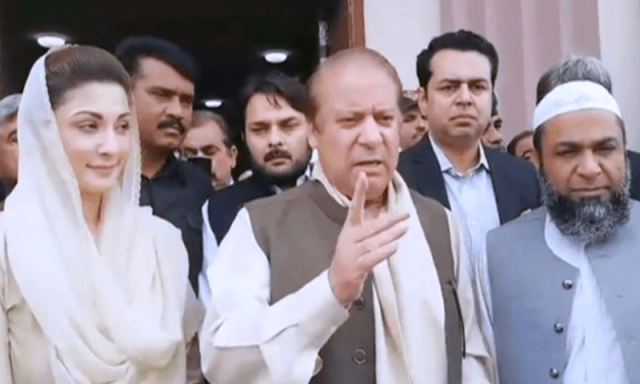 The ousted Prime Minister Nawaz Sharif and his daughter Maryam Nawaz have finally returned back to Pakistan. A 16-member team of National Accountability Bureau (NAB), awaiting the father-daughter duo at Allama Iqbal International Airport, took them into custody after immigration process as they arrived in the country a week after their conviction in the Avenfield reference pertaining to their luxury apartments in London.  The father-daughter duo was taken to Islamabad and then transported to Central Jail in Adiala, Rawalpindi, for a medical examination.

Suicide bombs blasts in KPK and Baluchistan made it difficult for the administration in Lahore to allow protestors to get organized and cause some heavy damage.

As per official procedure, the examination was carried out in the presence of the Islamabad magistrate and senior police officials. Before that, the FIA officials had confiscated their passports.

Read more: Maryam’s and Hussain Nawaz’s sons arrested due to attacks on protestors

The accountability court has recently awarded total 10 years imprisonment to Nawaz Sharif, 7 to Maryam Nawaz and a year to husband Captain Retired Safdar respectively in a much-awaited decision on Friday.  The ousted Prime Minister Nawaz Sharif has been sentenced to 10 years imprisonment under NAB ordinance Section 9(a)(v), which relates to owning assets disproportionate to known sources of income.

The Section 9(a)(v) of the NAB ordinance states: “A holder of a public office, or any other person, is said to commit or to have committed the offence of corruption and corrupt practices…. if he or any of his dependents or benamidar owns, possesses, or has [acquired] right or title in any [“assets or holds irrevocable power of attorney in respect of any assets] or pecuniary resources disproportionate to his known sources of income, which he cannot [reasonably] account for [or maintains a standard of living beyond that which is commensurate with his sources of income.]”

On the other hand, Maryam has been sentenced to seven-year to prison for abetment. According to the 173-page long verdict, “Accused Maryam Nawaz aided, assisted, abetted, attempted and acted in conspiracy with her father accused Mian Muhammad Nawaz Sharif who was a holder of Public Office.”

In Lahore, the workers of the former ruling party came on streets and made attempts to go to the airport to welcome their leader. They have, however, placed containers and deployed forces to stop people going to the airport for unstated security reasons.

The ousted Prime Minister Nawaz Sharif has been sentenced to 10 years imprisonment under NAB ordinance Section 9(a)(v), which relates to owning assets disproportionate to known sources of income.

Moreover, a clash took place between the PML-N workers and police at Ravi toll plaza. Police said three personnel, including an assistant sub-inspector and two constables, were injured in the clash.

Nawaz was not allowed to come out of the airport to address his party workers and was taken into custody.

Nawaz’s message for his supporters

The elder Sharif, who was in London with his ailing wife and children when the verdict was announced, said he is returning to Pakistan from London to fulfill his pledge to “honor the vote”.

“What is happening in this country today, what is happening in Lahore, raises questions regarding the elections. No other province is facing the situation we see in Lahore: hundreds of our party workers have been arrested; people are being pressured into switching loyalties. All of this forms a question mark on the credibility of the election,” Nawaz Sharif said.

“I am not afraid of being arrested. If I was, why would I be coming back? It does not matter if NAB or the people who have sent NAB personnel arrest me from here [Abu Dhabi] or from Lahore. I am ready for it,” Nawaz said.

According to officials, the workers were not allowed to gather information on the airport for two reasons. Firstly, Nawaz Sharif had been convicted by a court of law in Pakistan. He, therefore, would not have been allowed to address his supporters as he used to before his conviction. Secondly, there was a security risk. Suicide bombs blasts in KPK and Baluchistan made it difficult for the administration in Lahore to allow protestors to get organized and cause some heavy damage.

Furthermore, in Pakistan, it is the first time that an institutionalized system of law is being introduced. The former first family is facing the courts and the law of land is being given more weight over power and money.