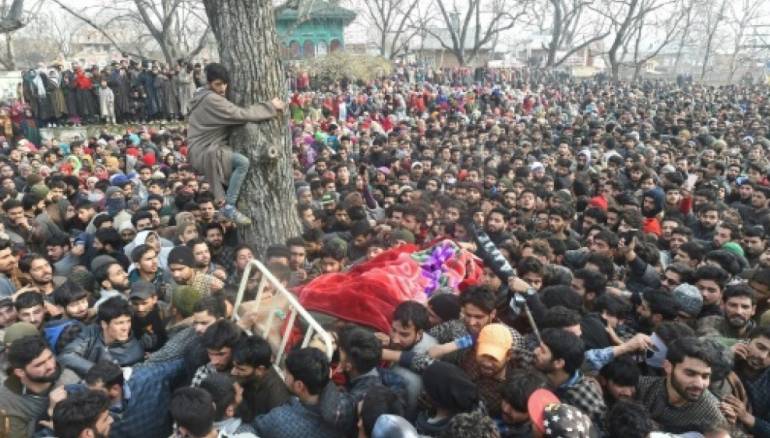 The most deadly year in a decade has left Indian-controlled Kashmir facing a grim future with militant groups and the New Delhi government digging in for an even fiercer battle in 2019, experts say. Indian forces say they killed two infiltrators coming from Pakistan on New Year’s Eve and authorities still virulently blame the neighbouring state for the three-decade-old conflict which has claimed tens of thousands of victims.

But Kashmir politicians and independent Indian experts say the presence of 500,000 troops in the former Himalayan kingdom and an election in India in 2019 leaves little hope for an end to the bloodshed. The Jammu-Kashmir Coalition of Civil Society (JKCCS), a rights group, listed 586 dead in its annual 2018 toll: 267 militants, 160 civilians — including 31 children — and the rest, state police and Indian armed forces.

Authorities accuse militants of targeting the families of police and security forces who have detained the relatives of wanted militants.

Its list does not include the dozens killed in firing across the unofficial border between the Indian and Pakistani sectors of Kashmir. Both sides claim the region. The numbers of dead militants and security forces are both the highest for a decade, as are the nearly 800 recorded clashes.

The bleak statistics all highlight the effects of a more intense government campaign — “Operation All-Out” — to flush out armed groups who want an independent Kashmir or merger with Pakistan. Even the 20 recorded cases of suicide among Indian forces in Kashmir is a record, according to the JKCCS.

The 12.5 million population in India’s only Muslim-majority state has given strong support to the militants’ political agenda. But the nationalist government under Prime Minister Narendra Modi has taken a hard line on Kashmir and Pakistan. With his Bharatiya Janata Party (BJP) seeking a new term this year, there will be no let up in the military showdown, experts said.

“I don’t expect anything to change in the coming year or so. Life will continue to be uncertain,” political analyst Siddiq Wahid, of the University of Kashmir, told AFP. “An election year in India means there will be an uptick in hardline Hindutva politics over Kashmir. The BJP will try to strongly align Kashmir with its muscular Hindu nationalism,” said Wahid.

“There has been no effort to engage the opinion (of Kashmiris) in any kind of a political process,” said Manoj Joshi from the New Delhi-based Observer Research Foundation think-tank. “So it is not surprising that the disaffected young are taking to militancy in larger numbers,” he told AFP.

Authorities accuse militants of targeting the families of police and security forces who have detained the relatives of wanted militants. Kashmiri civilians, in turn, are showing a greater willingness to express public defiance. Many take to the streets hurling stones at the Indian army when they lay siege to militant hideouts.

Thousands attended the funeral in December of 14-year-old Mudasir Ahmad Parrey, believed to be the youngest rebel killed in the battle that started in 1989.

This was General Election 2018 and not a general(‘s) selection