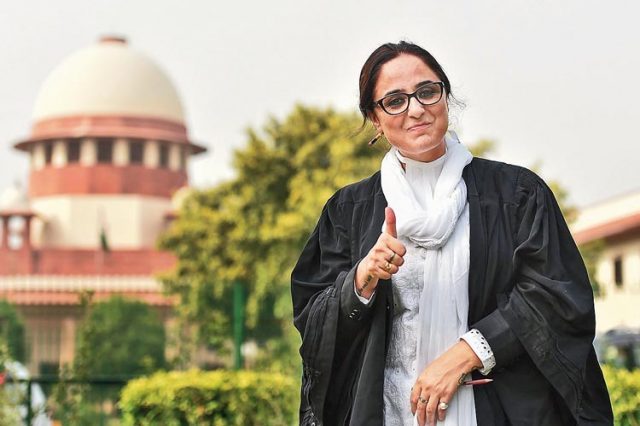 Advocate Deepika Rajawat, the defense counsel for eight-year-old Asifa Bano in Kathua rape case fears for her life as she in her statement informed the court that several elements including few members of Jammu Kashmir Bar Association have threatened her to face dreadful consequences if she continues to fight the case.

Jammu Police has provided security to Advocate Deepika Rajawat after she requested the Chief Justice to ensure her security. “I don’t know till when I will be alive. I can be raped, my modesty can be outraged, I can be killed, and I can be hurt. I was threatened yesterday that ‘we will not forgive you’. I am going to tell SC tomorrow that I am in danger.”

“I was at the court when Jammu Bar Association president B.S. Salathia passed by and said that I should not appear. I told him that I was not a member of the bar. But he told me that if ‘you will appear, we know how to stop you’.”…

She also rejected the accusation of collecting a vast amount of money for the case from Jawaharlal Nehru University and said it is a mere attempt from her detractors to malign her.

“My attention has been drawn to a news broadcast on Zee TV (on the programmed DNA) dated April 17, 2018, in which a false statement has been made by one Mr. Bhatti to the anchor Mr. Sudhir Chaudhary, that I have spent the last few days in JNU. I categorically deny that I have never set foot in JNU. The statement is false to the knowledge of Mr. Bhatti and is calculated to malign me,” she said in her statement.

In her statement, she also drew attention that her Twitter handle, which she says she has stopped using, has been hacked and reactivated, for which she has also lodged a complaint with the cyber cell of the Delhi police.

Defense counsel has also requested to shift the trial out of Kathua as she believes the Hindutva supporters will try to hamper the proceedings of the case.

SC orders round the clock security for lawyer @DeepikaSRajawat & her famiily. Rajawat is representing #KathuaRape Victim & had recieved threats, SC also orders that full security for the family members of the victim will continue till further directions from SC pic.twitter.com/sUQo9Ui6db— Sidharth Pandey (@SidharthPandey) April 16, 2018

“There is a sense of insecurity. People can damage the case there. You saw how they tried to prevent the crime branch from filing the charge sheet. If they can try and do that, imagine what they can do with us. And right now, the national media is following this case. But, how long will that last? What after that?”

Rajawat, 38 is a single parent, and a Kashmiri Pandit, whose family migrated from Kashmir to Jammu in 1986, has braved all harassment and threats from her colleagues who warned her not to take the case.

If anyone in India deserves my respect it is her

Please meet Ms. Deepika Singh Rajawat, a young lawyer from Jammu and Kashmir, who has defied all threats and abuses, and embarked on an arduous journey to provide justice to the eight year old Asifa Bano. #JusticeforAsifa #fb pic.twitter.com/8MvyNWtAQ3

Read more: After shamed at home, Modi welcomed by protests in London

Deepika Rajawat is determined to defy all the obstacles to seek justice for eight-year-old Asifa Bano despite receiving backlash from the hardliners.

How often do we see a photograph like this? A confident, professional woman flanked by men who are not lecheroulsy staring at her. pic.twitter.com/x0fSa786bT

Asifa Bano, belonging to Bakarwal-Gujjar nomad community was abducted, gang-raped for days before being murdered in Rassana village in Hiranagar tehsil of Kathua district in January.

According to a police report, eight male suspects – all Hindus – gang-raped and killed the girl to dislodge the Muslim nomads from the area.

Sanji Ram, a retired official from revenue department is believed to be the mastermind of the heinous act. Ram, is, in fact, the custodian of the temple where the girl was held in captivity.

Hindutva supporters affiliated to right-wing Hindu group are holding countrywide protests for filing a charge sheet against the accused in the case.