The recent Dengue outbreak in Pakistan has authorities and public alarmed as the plague seems to be getting out of hands. Several hundred more cases were registered and the number keeps increasing. What are the preventive measures and the cure? What symptoms should alarm you timely? 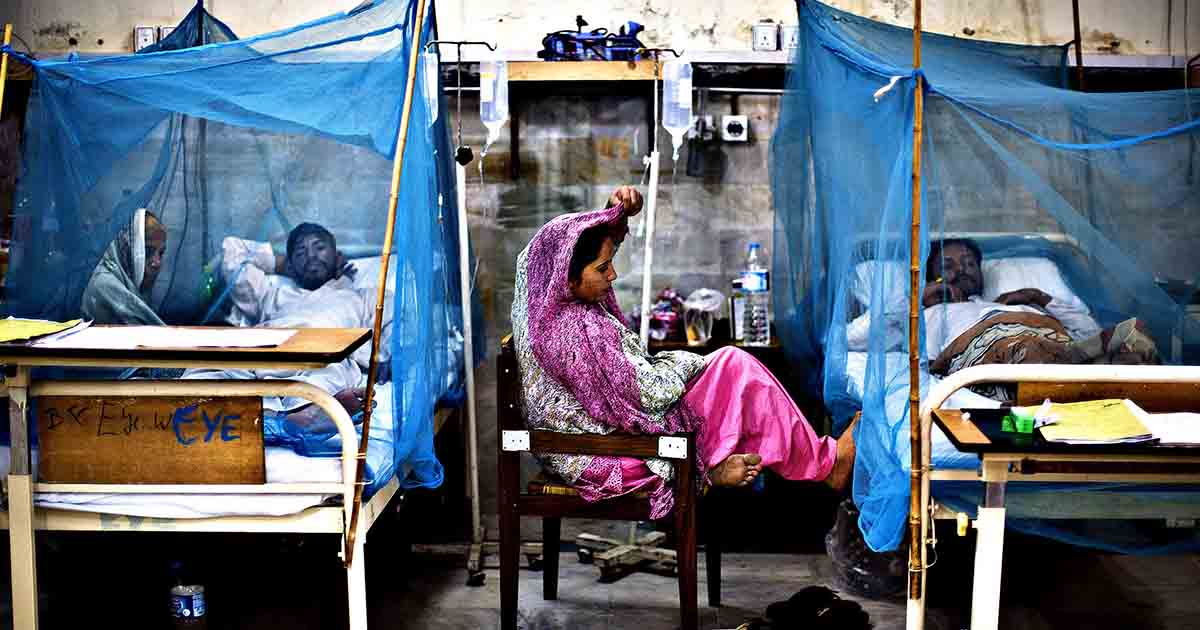 Dengue has evolved as a global life-threatening public health concern, affecting around 2.5 billion individuals in more than 100 countries. Member States in three WHO regions regularly report the annual number of cases. The number of cases reported increased from 2.2 million in 2010 to over 3.34 million in 2016. Although the full global burden of the disease is uncertain, the initiation of activities to record all dengue cases partly explains the sharp increase in the number of cases reported in recent years.

Since 2010, Pakistan has been experiencing an epidemic of dengue fever that has caused 16,580 confirmed cases and 257 deaths in Lahore and nearly 5000 cases and 60 deaths reported from the rest of the country. The three provinces facing the epidemic are Khyber Pakhtunkhwa, Punjab, and Sindh.

Dengue is a mosquito-borne viral infection. The infection causes a flu-like illness, and occasionally develops into a potentially lethal complication called severe dengue. About half of the world’s population is now at risk. Dengue is found in tropical and sub-tropical climates worldwide, mostly in urban and semi-urban areas. Severe dengue is a leading cause of serious illness and death among children in some Asian and Latin American countries.

Dengue virus is transmitted by female mosquitoes mainly of the species Aedes aegypti and, to a lesser extent, Ae. albopictus. This mosquito also transmits chikungunya, yellow fever, and Zika infection. Dengue is widespread with local variations in risk influenced by rainfall, temperature and unplanned rapid urbanization. Despite the efforts of the Government of Pakistan, especially in Punjab, the high cost of prevention has limited the ability of Pakistan to control epidemics.

The recent outbreak can more easily be tackled by getting back to the professionals who controlled dengue well during former CM Punjab Shahbaz Sharif era on war-footings.

According to a recent report, overall 1,499 cases are confirmed with the infection of dengue virus so far, whereas, 10 cases were reported from Chakwal, 8 from Attock, 2 in Jhelum. It may be noted here that a district magistrate had imposed Section 144 to deal with the outbreak of deadly dengue virus in the federal capital Islamabad on September 12 which seems useless. The district magistrate warned that any violation of the section would entail legal action. Under Section 144, tire shop owners will not be allowed to put tires in front of their shops and denizens will have to take precautionary measures while watering plants to prevent the spread of the mosquito-borne disease.

The primary preventative measure to reduce dengue infections is the control of mosquito populations. Because the transmission of dengue requires mosquitoes as vectors. One practical and recommended environmental management strategy is to eliminate unnecessary container habitats that collect water (such as plastic jars, bottles, cans, tires, and buckets) in which Aedes aegypti can lay their eggs.

Rise in dengue across Pakistan, highest number of cases reported from Karachi; In KP, the number of people infected with dengue virus has exceeded 1,600; in Punjab nearly 2000 cases reported https://t.co/0gt7NY25z4

This strategy is called source reduction. When container habitats are removed and water storage containers are covered with a fine mesh to prevent mosquitoes from getting inside them, mosquitoes have fewer opportunities to lay eggs and cannot develop through their aquatic life stages. Source reduction can be effective when performed regularly, especially when members of a community are mobilized and educated about vector control.

Environmental management initiatives can also include major changes in a community, such as installing water systems with direct connections to residences and replacing wells and other water-storage containers, which can be mosquito-breeding habitats. Smaller-scale environmental changes can also be effective. For example, mosquito populations can be reduced when all members of a community clear blocked gutters and street drains and keep their yards free of containers with standing water. Any open containers should be emptied and cleaned each week to eliminate mosquito eggs and larvae.

These efforts can reduce the number of mosquitoes living in an area. active monitoring and surveillance of vectors should be carried out to determine the effectiveness of control interventions.

Community-based approaches must go hand in hand with educational initiatives that teach people about mosquito vectors and the risks of having mosquito-breeding habitats near their homes. Educational initiatives can encourage people to take an active role in participating in source reduction. Communities that understand the need to make behavioral changes are the most effective in controlling dengue.

In addition, people can reduce the risk of mosquitoes entering their homes by using windows and door screens or by keeping their doors and windows closed and using air conditioning to keep their homes cool. Aedes aegypti typically bites people during the day, so wearing long pants and long-sleeved shirts can reduce mosquito bites when spending time outdoors. In addition, mosquito repellents can be applied to exposed skin and clothing to lower the risk of mosquito bites.

The Centers for Disease Control recommends mosquito repellents that contain DEET, picaridin, lemon eucalyptus oil, or IR3535 as the active ingredient. Sleeping under a mosquito net can also provide protection from being bitten, particularly in areas where people rest in the afternoon or in houses with infants.

Different other methods also can be used to control dengue;  like traps including ovitrap, with other chemical and biological controls. There is no specific treatment for dengue fever. For severe dengue, medical care by physicians and nurses experienced with the effects and progression of the disease can save lives – decreasing mortality rates from more than 20% to less than 1%. Maintenance of the patient’s body fluid volume is critical to severe dengue care. Careful clinical detection and management of dengue patients can significantly reduce mortality rates from severe dengue.

Vaccination should be considered as part of an integrated dengue prevention and control strategy. There is an ongoing need to adhere to other disease preventive measures such as well-executed and sustained vector control. Individuals, whether vaccinated or not, must seek prompt medical care if dengue-like symptoms occur. The recent outbreak can more easily be tackled by getting back to the professionals who controlled dengue well during former CM Punjab Shahbaz Sharif era on war-footings. One of the major issues is the lack of management skills which is adding insult to injury.

Additionally, Govt. must provide training on clinical management, diagnosis and vector control at the regional level with some of its collaborating centers and formulates evidence-based strategies and policies. Moreover, develop new tools, including insecticide products and application technologies.

Dr.Zeeshan Khan is an analyst, activist, commentator, Life Trainer, a contributor to the Op-Ed pages of different newspapers and a doctor at CMH. He can be reached at Twitter @DrZeeshanKhanA1 and dr.zeeshan.alias.ghazikhan@gmail.com. The views expressed in this article are author’s own and do not necessarily reflect the editorial policy of Global Village Space.

A Child Raped, Madrassas, Mullah & Government: Who is Responsible?

Iran, A Ticking Bomb: Who Has Their Hands on the Remote?

Ayodhya: the history of a 500-year-old land dispute between Hindus and Muslims in India