Detente 2.0’ between Russia and the US: an unconvincing idea under Trump 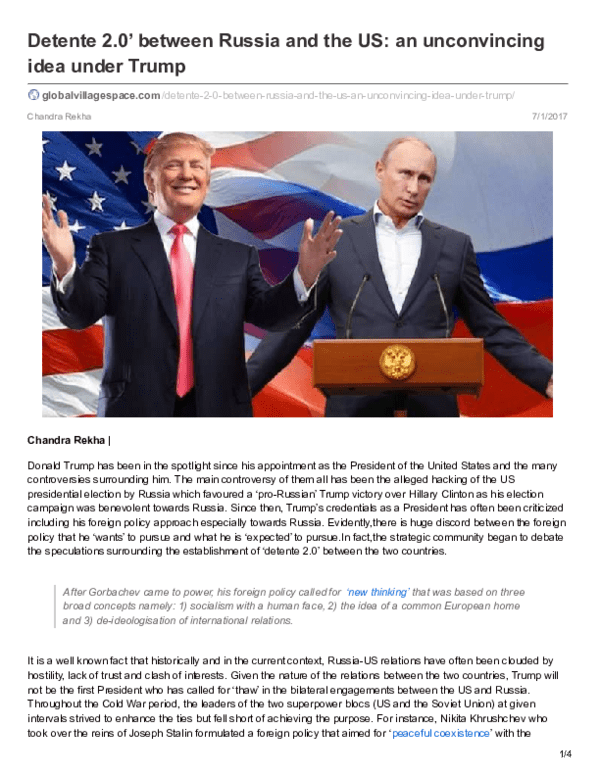 Donald Trump has been in the spotlight since his appointment as the President of the United States and the many controversies surrounding him. The main controversy of them all has been the alleged hacking of the US presidential election by Russia which favoured a ‘pro-Russian’ Trump victory over Hillary Clinton as his election campaign was benevolent towards Russia. Since then, Trump’s credentials as a President has often been criticized including his foreign policy approach especially towards Russia. Evidently,there is huge discord between the foreign policy that he ‘wants’ to pursue and what he is ‘expected’ to pursue.In fact,the strategic community began to debate the speculations surrounding the establishment of ‘detente 2.0’ between the two countries.

After Gorbachev came to power, his foreign policy called for ‘new thinking’ that was based on three broad concepts namely: 1) socialism with a human face, 2) the idea of a common European home and 3) de-ideologisation of international relations.

It is a well known fact that historically and in the current context, Russia-US relations have often been clouded by hostility, lack of trust and clash of interests. Given the nature of the relations between the two countries, Trump will not be the first President who has called for ‘thaw’ in the bilateral engagements between the US and Russia. Throughout the Cold War period, the leaders of the two superpower blocs (US and the Soviet Union) at given intervals strived to enhance the ties but fell short of achieving the purpose. For instance, Nikita Khrushchev who took over the reins of Joseph Stalin formulated a foreign policy that aimed for ‘peaceful coexistence’ with the Western allies especially the US. Under Leonoid Brezhnev and Richard Nixon’s rule, the two countries signed the arms control treaty- SALT I and SALT II.

After Gorbachev came to power, his foreign policy called for ‘new thinking’ that was based on three broad concepts namely: 1) socialism with a human face, 2) the idea of a common European home and 3) de-ideologisation of international relations. Post Soviet collapse, the US became the leader of the unipolar world, the official foreign policy of Yeltsin was ‘pro-western’ as he believed that no country was better positioned to aid and assist the new administration than the US. Under Vladimir Putin, Russian foreign policy became more open to international cooperation especially with the US and European countries. Dmitry Medvedev and Barack Obama came with a new vigour and established the much awaited ‘reset’ between the two countries. Despite such efforts by the leaders of both the countries, the bilateral interaction often receded as seen in events such as Ukraine imbroglio in 2014. This phase has been termed as ‘new Cold War’ period as the relations today have reached its lowest ebb since the bipolar politics.

Read more:Growing hate for Russia in the U.S after Trump’s victory

Contrary to this development since 2014, President Trump has called for betterment of ties and had even hinted at removing the economic sanctions imposed on Russia as according to him, it has failed to make any impact on its re-assertion in global affairs much evident in the military and anti-Islamic State campaign in Syria. However, given the fact that there is lack of progress in Trump’s foreign policy approach, ‘detente 2.0’ between Russia and the US is seen as an unconvincing idea under President Trump. Several factors have prevented Trump from pursuing his benevolent Russian policy as, in spite of unlimited power granted by the American constitution to its President, Trump has delayed in executing his decision of removing the sanctions. A key inference that can be drawn in this regard is the political pressure and consequences of such an action. Trump is caught in one of the most difficult conundrums which include lack of support at the domestic level alongside a hostile mainstream media. A strong support system is a much needed tool as he is not a seasoned political leader with any prior experience on conducting foreign policies. Moreover, his cabinet members’ appointments were too disputed as seen with the removal of National Security Advisor Michael Flynn.

Read more:Trump’s travails may spill over to Euphrates valley

Third important aspect is the legacy of the countries towards each other. The US and its leadership continue to see Russia as an extension of Soviet Union and a threat to its national interests. A re-assertive and a resilient Russia since 2000 is an ‘ego shock’ to the US given its revival post Soviet collapse dismal status.

Secondly, Trump has failed to gain confidence of his fellow countrymen and the Senate due to his impulsive decisions and an unpredictable nature. For instance, Trump formally abandoned the 12 nation Trans-Pacific Partnership and the Paris Accord on Climate. Such decisions are to set to impact the long established engagements with US’ traditional partners such as Japan and India. moreover, despite calling for a thaw with Russia, Trump ordered the launch of 60 cruise missile attacks on Syrian government controlled airbase in retaliation for a suspected chemical attack on rebel-held area that killed many civilians. Clearly, this action of Trump has annoyed even Russia, thus indicating that the US would not accommodate its interests or collaborate in establishing peace and stability in Syria. Russia has offered to mend ties with the US on many occasions but at the same time also refuses to alter or compromise its assertive foreign policy interests much to the displeasure of the US.

Read more:Syria: Will Russia kneel in front of Washington?

Third important aspect is the legacy of the countries towards each other. The US and its leadership continue to see Russia as an extension of Soviet Union and a threat to its national interests. A re-assertive and a resilient Russia since 2000 is an ‘ego shock’ to the US given its revival post Soviet collapse dismal status. Moreover, the US since its reign as a preeminent actor in international relations in post Cold War era, aspires to remain in that position ceaselessly. The US policies and interests have never been accommodative to ‘equivalent’ sharing space with other global players including Russia. Russia’s international behavior on the other hand is solely based on its national and global interests irrespective of who leads the Washington administration or to what decree the US leadership would respond as a consequence of its action, for instance, the accession of Crimea in 2014.Moreover, the psyche of Russia is also based on how the US had exploited its miserable condition post Soviet collapse despite pursuing a pro-Western foreign policy during 1990s. The former superpower desires and aspires to be an influential global power sharing equal partnership and opportunities with its ally. In other words, Russia would not compromise to play a ‘second fiddle’/ ‘junior’ in any partnership.

Hypothetically, should president Trump succeed in establishing a thaw with Russia, it would still be a short lived alliance as many impediments would be either ignored or put in the back-burner instead of finding long term solutions. More importantly, neither Trump nor any leader of America would or have the leeway to annul NATO– an organisation that has aimed to contain Russia’s influence and enlargement of US and its allies’ interests in former Soviet space. The potential compromise on defensive-offensive capabilities including nuclear weapons will be a key factor in strengthening and building up confidence in the partnership between the two countries. Moreover, both the countries have found each other on the other side of the fence on many issues such as the Syrian crisis.

Read more:Chances of success for Russian proposed constitution for Syria?

To conclude, president Trump has a huge task ahead to regain Russia’s confidence in order to ascertain detente 2.0 with the US. For Trump to transform Russia-US relations into a reality, the first and foremost factor would be addressing historical baggage that exists between the two countries to successfully establish a long term partnership.

Moreover, given the dynamic nature of international relations, revival of Russia-US bilateral engagements cannot be studied in isolation. China in this regard is a key variable in understanding the future scope and prospects of Russia-US relations. Currently, Russia’s strategic partnership with China is in a comfortable position yielding the expected outcomes both at the bilateral and multilateral level. In recent times, the growing proximity between Russia and China is based on many common interests and concerns especially challenging the pre-eminence of the US. Russia-US relations on the other hand lack mutual interests, trust and understanding. Nevertheless, the three ‘W’s i.e., a ‘Withering’ role of unipolar power- the US, Russia which ‘was’ a superpower and China- a ‘Wanna’ be superpower– will be a major factor in determining the future scope and challenges in the strengthening of ties between Russia and the US.

Read more:US and Russia: A meeting of two giants during G20 summit!

To conclude, president Trump has a huge task ahead to regain Russia’s confidence in order to ascertain detente 2.0 with the US. For Trump to transform Russia-US relations into a reality, the first and foremost factor would be to address historical baggage that exists between the two countries to successfully establish a long term partnership. In order to do so, domestic support system should be the immediate focus of Trump administration as for any foreign policy to achieve the required pay offs need popular consent for the peaceful execution of national interests.If Russia and the US are able to achieve the much awaited reset,the countries as strategic partners can address global crisis and provide global security and stability effectively. Nevertheless, a stable Russia-US relation would yield strategic pay offs for global community both in terms of geopolitics and geo-economics for partners such as India and European countries.

Ms. Chandra Rekha is currently working as Associate Fellow at Centre for Air Power Studies (CAPS). She has authored a book titled “India- Russia Post Cold War Relations: A New Epoch of Cooperation’ co-published by Knowledge World Publication and Routledge Publication. Her current project at CAPS is on “Shifting Trends in Russia-China Relations in Contemporary International Geopolitics”. She is also pursuing her Ph.D from Jawaharlal Nehru University and her research work is on “Revival of Russia’s Defense Industrial Complex, 2000-2014”.The views expressed in this article are the author’s own and do not necessarily reflect Global Village Space’s editorial policy.

Are Russia and China Creating a New World Order in Eurasia?

Trump’s sabre-rattling: Is a nuclear war between US and North Korea imminent?