Prof. Noam Chomsky, known for his critique of American foreign policy and his stance to defend human rights, has reportedly supported a petition demanding the release of MRS. Is it an attempt to pressurize Pakistani investigation agencies and courts to give a verdict in his favor? 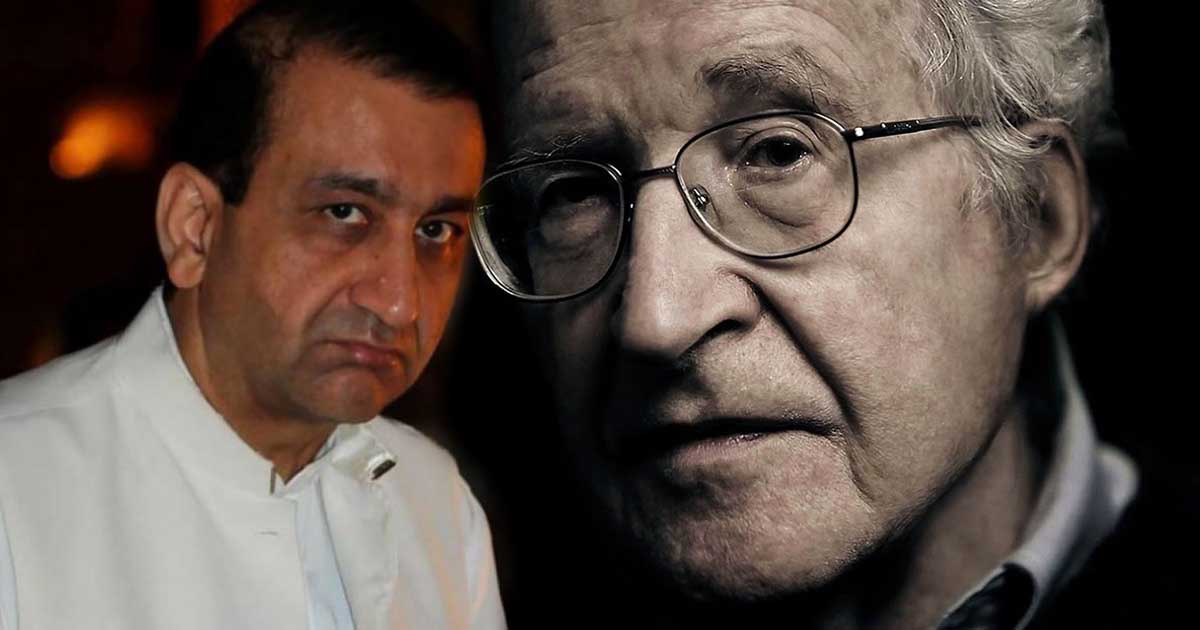 According to local media reports, circulating in Pakistani media, Prof. Noam Chomsky, a renowned rights activist and critique of American foreign policy, condemned the arrest of Jang-Geo Editor-in-Chief Mir Shakil-ur-Rehman (MSR). It is important to note that Pakistan Union of Journalists decided not to support MSR and did not call for protest. The independent body maintained that let the authorities complete investigation before taking any step.

Prof. Chomsky has reportedly given his support to a statement calling for the fair treatment of MSR. “The arrest of Mir Shakil ur Rahman, the editor-in-chief of the Jang-Geo media group in Pakistan has taken place without a free trial or a conviction against him,” says the petition.

“Not only has the trial not begun, but no charges have even been framed against him. Yet he has been in a lockup now for over a month practically in solitary confinement,” the petition adds.

Notably, MSR was arrested in Lahore by the NAB on March 12. Nawazish Ali, NAB spokesperson says media tycoon’s arrest has been in a case pertaining to the clandestine allotment of a 54-kanal piece of land in 1986 – from the then government of CM Nawaz Sharif.

He is accused of acquiring exemption on 54 plots in Johar Town, Lahore in 1986 during former then Chief Minister Nawaz Sharif’s term. However, sources close to Prime Minister Imran Khan has revealed that PM is displeased and puzzled due to the sudden arrest of Mir Shakil ur Rehman.

The petition demanding MSR’s arrest says that “Rahman has been cooperating with the authorities about the case which is related to a 34-year old property transaction between two private parties. He presented himself before the investigators, flying in from outside the country.”

It further demands that “There is no reason of not releasing him from jail, particularly at a time when the global coronavirus pandemic is leading governments to set free non-violent prisoners with no criminal record, particularly if they are elderly and have health issues as Rahman does”.

Prior to Prof. Chomsky’s demand, Barrister Amal Clooney’s law firm, known for its work on international human rights issues, has filed a complaint at the United Nations (UN) against the “politically-motivated and arbitrary arrest”  MRS by the NAB,

Why is PML-N voicing for MSR?

Pakistan Muslim League-Nawaz (PML-N) Information Secretary Marriyum Aurangzeb has said that the opposition parties have filed a petition in Islamabad High Court (IHC) against the arrest of Geo and Jang Group owner Mir Shakil ur Rehman.

It is worth noting that the same media house has been accused of supporting Nawaz Sharif, and opposing the PTI. As a matter of fact, back in 2018, the SC reportedly grilled the Capital Development Authority (CDA) for its inability to regulate property/land.

The apex court also emphasized on payment of property regularisation fee during the hearing. The top judge had reportedly distanced himself from those remarks, explaining that the court had been referring to the CDA in Banigala case, not the government, and issued notices to the publications. Later on, the publication offered an unconditional apology.

Amjed Jaaved - 10 April 2021
In its ‘2020 Country Reports on Human Rights Practices’ to the US Congress, the Department of State found India wanting in more than a...

Will ex-servicemen associations & families of the martyr’s demand justice on Dawn planted story?

The “Kafirs” of Parachinar and (perhaps) Quetta and Karachi and the Muslims of Bahawalpur!

Pakistan’s Solution To Everything Out Of Line: Call The Army