Doctors in a media briefing at Karachi Press Club warned that decision to open mosques in Ramadan for tarawih is a bad decision that can backfire. They asserted that doctors and paramedics are fighting corona virus - and not the clerics. Doctors demanded Prime Minister and religious leaders to review their unwise decision 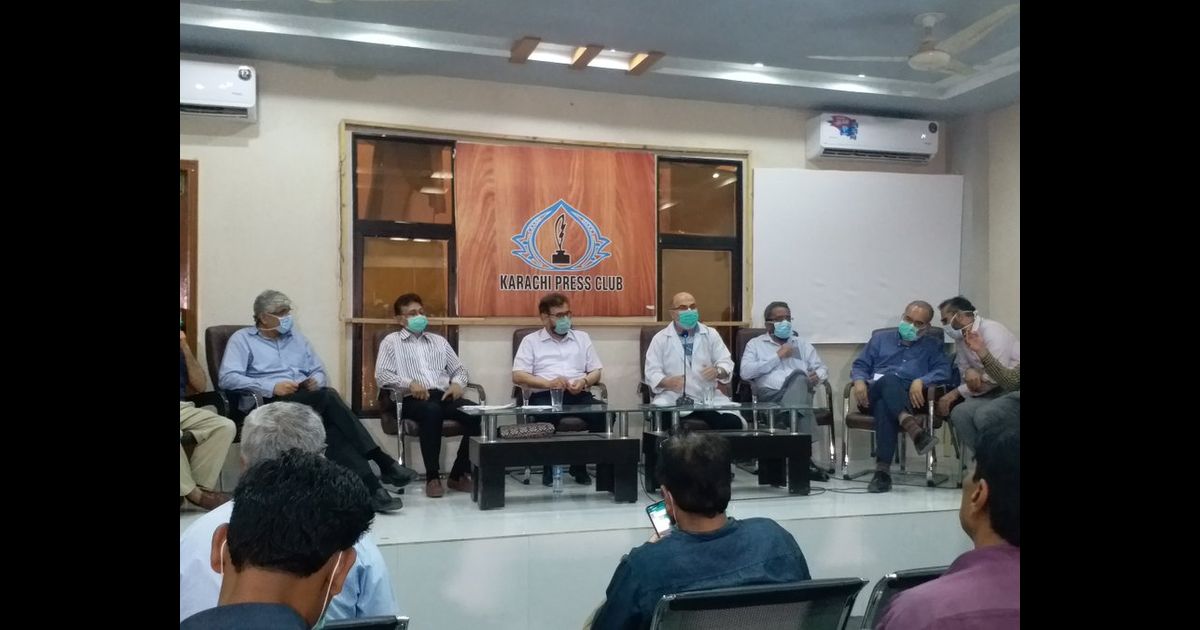 Karachi doctors in a press conference on Tuesday have demanded the government to revert decision on prayers and smart lockdown.

Dr. Abdul Bari Khan, Indus Hospital CEO, said that the opening of mosques is being stressed before Ramadan. He said that the health facilities responding to the coronavirus health crisis in Karachi are “nearly full”.

Addressing a press conference alongside other doctors, he said the doctors opposed any measures to ease the lockdown because Covid-19 cases have been rising rapidly.

Earlier, Pakistan’s top health experts and medical scientists asked the government and prominent clerics to ‘review’ their consensus decision of holding Friday, Taraweeh and daily congregational prayers. Health professionals called it ‘almost impossible’ for ulema and mosque management to make people abide by the precautionary measures to contain the spread of coronavirus.

In a joint letter to the government and the prominent clerics of different schools of thought, the noted health professionals of the country expressed their ‘strong reservations’ over the consensus decision between the federal government and the clerics last week about congregational prayers.

President of Pakistan, Dr. Arif Alvi on Sunday after meeting with ulemas announced mosques will remain functional and Standard Operating Procedure (SOP) will be followed. A 20 point agenda agreed upon by ulemas and President was supported by Prime Minister Imran Khan.

The decision was being criticized by media and civil society, and now doctors have also come forward to voice concerns. It is being demanded across all circles that the decision on prayers must be reverted.

The doctors have forewarned the government that allowing prayers in larger numbers will have lethal aftermath as the number of COVID-19 patients is already rising in the country. They also stated that the virus will not differentiate between humans based on their religious or moral activities.

Furthermore, they requested the business community to keep the markets, non-essential shops closed and observe patience for the time being until the danger of Coronavirus has passed.

A group of senior doctors in Pakistan and abroad have written a letter to the govt, urging it to review its decision to allow congregational prayers in mosques and limit the prayers to 3-5 persons as done previously in view of rising #coronavirus cases https://t.co/sqjSaVEmSf— Dawn.com (@dawn_com) April 21, 2020

Moreover, doctors acknowledged the agreement between the government and Ulema, however, they have raised strong reservations based on the recent observations. Videos have been doing rounds on social media during the last 48 hours in the majority of the people attending prayers aged above 50 years! This is the violation of the key point of the agreement and will lead to the spread of the deadly disease in the most vulnerable group of the population.

As Ramadan is approaching, people will be attending longer Taraweeh prayers which will expose them to even bigger chances of virus contraction.

In their statement, the doctors stated that allowance of congregational prayers will exponentially increase the number of COVID-19 affectees. This will exert even more pressure on the already collapsing health care system.

They also added that limiting the attendance for prayers in mosques has no likelihood of causing harm to the reputation of Ulema rather it will eventually lead to loss of great number of lives of our fellow citizens which can be prevented.

Opposition parties like Pakistan Muslim League (N) and People’s Party also could not openly oppose the government’s decision to ease restrictions on mosques. Molana Fazlur Rehman said he will offer prayers at home but he did not ask his followers to do the same.

Earlier in March, prominent religious scholar Mufti Taqi Usmani urged people to respect the decision of the federal government to limit the number of people in congregational prayers at mosques around the country in the wake of the coronavirus outbreak.

In a message posted on social networking platform Twitter early on Friday morning, the religious scholar said that people should follow the directives of the government for Friday prayers and also try to follow them in their daily prayer routines.

Esteemed religious scholar Maulana Tariq Jameel also clarified the issue of offering prayer at home during the pandemic, a month ago. He narrated an incident from Prophet’s (PBUH) era to support his statement. “Once, it was raining heavily in Madinah. When Bilal climbed up to call Azaan, Prophet Mohammad (PBUH) asked him to tell everyone to perform Namaz at home and not to come to the mosque.”

The scholar further stated a Hadith ” This is not a weakness of faith but a precautionary measure.”

In the entire Muslim World, mosques and other religious worship places have been closed but Pakistan was not able to convince religious clerks of the risks that social gatherings pose amid Coronavirus outbreak.

It is worth mentioning that, in order to restrict people from coming to the mosque for prayer, an amendment has been made in Azaan by the muazzins in Kuwait. They have replaced “Hayya alas salah” with “Assalatu fi buyutikum” which means “offer prayers at homes.”