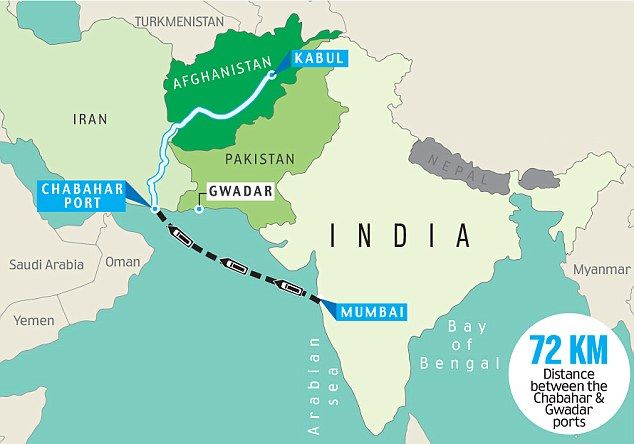 Is the dispatch of the first Indian wheat gift to Afghanistan via Chabahar only a massive public relations gimmick or is it part of the Indo-US strategy to render Pakistan irrelevant — both geo-politically and geo-economically? Despite the fast development of the Gwadar Port and the completion of the CPEC projects, will the Chabahar lead Pakistan to lose its geo-strategic advantage?

Will Gwadar — the much bigger and touted natural deep sea port — still have enough traction to become the Pakistani Schenzen, the mega hub of electronics goods in southern China?

These questions beg deep introspection — if not cause worry — in Islamabad for various reasons. Firstly, what had started as a ‘little insignificant project for India’ has eventually become a reality, primarily born out of the strategic positioning by New Delhi i.e. minimising Afghanistan’s dependence on the Karachi Port for transit and bilateral trade. In the current circumstances, Chabahar presents a more ‘strategic’ safer and certain trade route for Afghanistan’s external trade.

Pakistani leaders will need to pull up their socks and go beyond the current oratory and look-up to the Chinese for-bail-out mode.

Secondly, India is skillfully projecting its Chabahar venture as a critical element in its so-called Indo-specific expansion across the Indian- Pacific Ocean region, with Japan — an ideological adversary of China — and Australia more than keen to join forces in such regional connectivity projects in partnership with New Delhi.

Two recent opinion pieces in influential newspapers like Brisbane Times and Australian Financial Review are instructive in this regard. They exhorted the Australian government to further its ties with India and consolidate Indo-Pacific partnership, which would also help in countering China. Julie Bishop — Australia’s foreign minister recently said that “Australia, the United States, Japan, India and other nations have committed to ensuring that the Indo-Pacific remains a peaceful and stable region”, indicating towards enhanced cooperation in the future.

Thirdly, unlike the Indo-Pacific partnership, Pakistan through the CPEC is increasingly getting bracketed with China. As a consequence, it has become a softer target for the Indo-US-Afghan geo-political games against Beijing, articulated by US foreign secretary Rex Tillerson during his recent Kabul and New Delhi visits, when he called for ‘deeper cooperation with India in the face of growing Chinese influence in Asia’. Clearly, this geopolitical posturing — masked in geo-economics — exposes Pakistan to multiple risks associated with such policies aimed at denying the adversary every single possible advantage.

The Chinese use the Schenzen metaphor to denote their commitment to the development of Gwadar as a big industrial-based port for trans-shipments.

Fourth, regardless of how the Pakistani governmental machinery takes it, the bitter reality is that the Indo-US alliance has decided to take on a thus far tactical Pakistan strategically. On the strategic front, unfortunately, Islamabad and Rawalpindi — still mired in tactics and suffering from the strategic location syndrome — have miserably lost to the smart geopolitics played by India.

Fifth, tardy, tit-for-tat responses to Kabul, have already nudged nearly 50 percent of the Afghan transit and bilateral trade away from Karachi.

Read more: Chabahar – Some Indian myths and the reality

All the Afghanistan-bound cargo, for instance, has again come to a standstill as of November 1, following another high-handed circular by the Federal Board of Revenue, which requires the traders to furnish additional documents for clearance.

Unfortunately, Pakistan doesn’t have national leaders such as Xi Jinping, Narendra Modi, or Erdogan — all of whom have placed their people above personal business interests.

All this means additional costs and eroding the ease of doing business in and through Pakistan. Simple statistics speak for the gradual decline in Afghanistan’s external trade through Pakistan; between 2010 and 2011, Pakistan’s exports to Afghanistan peaked at nearly $2.4bn. They declined to  $2bn in 2011-13 and are likely to dwindle to less than $ 1.5 billion this year.

Sixth, the Pakistani state seems victorious through the latest cargo clearance requirements (possibly in response to President Ghani’s decision to deny Pakistani trucks a passage through Afghanistan), yet the real loser of this tit-for-tat reaction is the country’s strategic interest — much more than the Afghan traders or their government. If the transit and bilateral trade with Afghanistan dry up, this also entails graver economic consequences for the small and medium business and human resource of the conflict-battered Khyber Pakhtunkhwa (KP) and Balochistan provinces.

Two recent opinion pieces in influential newspapers like Brisbane Times and Australian Financial Review are instructive in this regard.

Now if we look at Chinese and Pakistani officials, they all sound upbeat about the rapid progress of CPEC projects and hope that the Gwadar Port will — in five years from now — become South Asia’s biggest shipping facility with a capacity of handling 13 million tonnes of cargo annually, likely to increase to 400 million tonnes annually by 2030.

More importantly, the Chinese use the Schenzen metaphor to denote their commitment to the development of Gwadar as a big industrial-based port for trans-shipments. The progress thus far makes CPEC, the fastest of the six Belt and Road Initiative corridors that Beijing plans to establish.

But with Pakistan’s self-centered political leadership, unimaginative bureaucracy, and an India-centric tactical military establishment, the journey to the Pakistani Schenzen will remain bumpy, lopsided, with the Chinese influence looming large all over.

To get there, and to optimally utilize Gwadar Port as well as CPEC-based development projects to the advantage of Pakistan in a geo-politically loaded environment, Pakistani leaders will need to pull up their socks and go beyond the current oratory and look-up to the Chinese for-bail-out mode. But unfortunately, Pakistan doesn’t have national leaders such as Xi Jinping, Narendra Modi, or Erdogan — all of whom have placed their people above personal business interests. It is a context between strategic positioning (by India-US) and a tactical mindset (Pakistan) that reels from bureaucratic incompetence, indifference (of leadership) and an establishment that is still driven more by the conventional security paradigm than guided by the modern ways (geo-economics) to trump the adversaries.

US will withdraw troops from Syria ‘very soon’: Trump