GVS looks into how Doha’s global vision, Al Jazeera, became an icon in the Arab world. It is believed that without Al Jazeera, the Arab street will lose its voice – and its heart.

Of the 13 demands by Saudi lead alliance upon tiny Qatar; one that struck the most intrigue in the world – outside the Middle East – relates to Al Jazeera. In June, Egypt, UAE, Bahrain, and Saudi Arabia, while breaking off diplomatic relations, and imposing blockade upon Qatar, demanded that Qatar’s state-sponsored media network – Al Jazeera – should be shut down.

Later that demand was toned down, a bit, when UAE minister, Noura Al Kaabi, asserted that instead of shutting down, what the four allies want is a “fundamental change and restructuring of Al Jazeera”. Qatar has refused – and deadlock persists to this day. Why is Al Jazeera so important to this crisis?

The answer lies in the way, Al Jazeera, the Middle East’s most powerful media network and no doubt most controversial, has redefined the Arab world since its emergence 21 years ago, in November 1996. For years, the Saudis had dominated the Arabian Peninsula and its media- most of which, from Lebanon to UAE, is invested by Saudi money.

The Arab world’s bitter fight over the facts of the region’s revolutions and wars since 2011 foreshadowed the struggle over the news in the West.

Within the 22 countries of the Arab world, around 30-40 million switch to, its Pan-Arab, broadcasts on a daily basis; a sharp contrast to its competitors, for instance, US-controlled network, Al Hurra, considered third, after Al Arabiya, barely reaches to around 1-2 million in 24 hours – though Al Hurra Iraq, that specifically focuses on news of Iraq, does slightly better than Al Jazeera inside its own limited market in Iraq.

In the late 1990s, Qatar’s then Emir, Hammad bin Khalifa Al Thani, father of the current Emir, Tamim bin Hammad Al Thani, abolished the country’s ministry of information and ended formal censorship – a policy decision which no other state in the MENA region has been able to emulate to this day.

Freedom of the press, however imperfect, thus became a winning brand for Qatar. It was an approach that paired with Qatar’s “open door” foreign policy that makes the country both the location of the largest U.S. military base in the Middle East and a refuge for officials from Hamas and the Taliban. 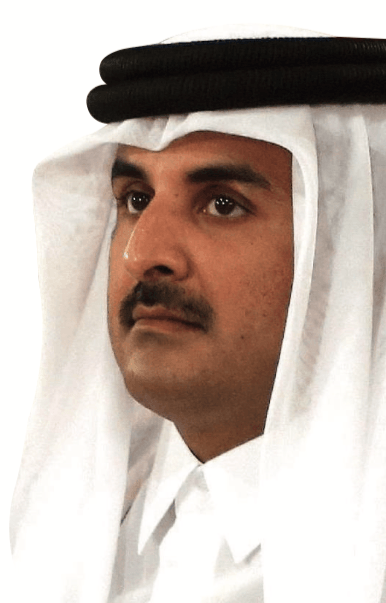 Journalists from an aborted BBC Arabic channel formed the nucleus of the new newsroom in Doha. But seeds of conflict with the powerful Desert Kingdom were present in Al Jazeera’s DNA; the BBC Arabic experiment was Saudi financed and floundered because of the conditions Saudis were trying to place upon it.

Read More: How is Qatar countering the spread of Fake News?

Hugh Miles, author of “Al Jazeera – the Inside Story” had argued in a far-reaching piece, “Al Jazeera Effect” in the US publication, Foreign Policy, in Feb 2011, that despite all their historic problems with Saudis, Qataris are fully aware that if they upset the kingdom then it would be at their own peril.

As a result, Hugh Miles noted that coverage of Saudi affairs on Al Jazeera has never been as bold as coverage of Egypt and Tunisia. Issues of extreme sensitivity to the Saudi regime, such as royal family corruption and the succession question, were always passed over lightly.

This cautious policy worked; in the beginning of 2011 relations with Saudi authorities had improved to the extent that Al Jazeera was allowed to open an office and place correspondents in Saudi Arabia. But in the same piece, (Al Jazeera Effect; Foreign Policy, Feb 2011) Hugh Miles had predicted that the power of political transformation which Al Jazeera demonstrated during the Arab Spring – especially in Egypt – may lead to serious difficulties with Saudis in a not so distant a future.

Doha’s global vision, Al Jazeera, became an icon in the Arab world with rolling coverage of the events at the center of the region’s consciousness: the second Palestinian intifada in 2000 and the U.S. invasion of Iraq in 2003.

Channel took an intensive approach to both events, deploying cameras that documented Israeli and American bombings, but also broadcasting Pentagon news briefings and becoming one of the few outlets in the Arab world to air Israeli officials’ comments – perhaps the first amongst Arab-owned networks. Al Jazeera’s motto has been and still is: “Opinion and the Other Opinion”.

Journalists from an aborted BBC Arabic channel formed the nucleus of the new newsroom in Doha.

Media experts and academics point out the strengths behind this reach and influence. They argue that on all the big issues that really resonate with people all around the region, in the minds and hearts of people: the Arab-Israeli issue, anti-western sentiment and the Iraq war, and the Arab uprisings; on those three seminal, big-sticker, gut issues, Al Jazeera took bold positions from the front leading the charge.

With its populist outlook and a large network of bureaus across the region, Al Jazeera was literally built and groomed, to cover the revolution. Al Jazeera Arabic’s live broadcasts of demonstrations in Tunisia, Egypt, Yemen, Libya, and Syria helped create a unifying narrative of the Arab Spring, with audiences tuning in every Friday to watch synchronized protests across the Middle East.

Al Jazeera English—established in 2006—provided critical coverage of the uprising to the non-Arab world. The MENA region reached a turning point, in its tumultuous politics, in the summer of 2013 when Egypt’s military, under Gen. Sissi, overthrew the country’s Islamist president Mohamed Morsi, who was elected in a free election that followed the 2011 uprising.

Al Jazeera had seen all sorts of attacks against itself from all kinds of regimes in the Middle East from Baghdad to Tel Aviv, and the US airstrikes, but now a new draconian phase started. In December 2013, Egyptian authorities arrested three Al Jazeera journalists, charging them with supporting the Muslim Brotherhood, which by then had been banned as a terrorist group.

Channel took an intensive approach to both events, deploying cameras that documented Israeli and American bombings, but also broadcasting Pentagon news briefings and becoming one of the few outlets in the Arab world.

They want to take away Qatar’s Soft Power?

In Doha, Al Jazeera’s executives blame authoritarian states that want the network shut down. Mustafa Souag, Al Jazeera’s current director-general, who has served as its Head of Arabic News for a long time, says the Network has been charged with bias simply for giving airtime to opposition groups alongside the region’s governments.

Arab regimes have created this perception through a “huge propaganda campaign,” he argues. His ex-colleague, Al Jazeera’s former Director-General, Wadah Khanfar readily agrees. He thinks that Arab regimes, especially the GCC countries are trying to take away the “most important soft power of Qatar, which is Al Jazeera”. All across the region is a war of narratives taking place;

For supporters of Gen. Sissi and his regime, the overthrow of Morsi was a counter-revolution; with Al Jazeera’s objective lens it was old-fashioned, “military coup”.

But Al Jazeera’s conflict has global dimensions; many in Washington see it supporting Hamas or Hezbollah or Iran; it may be popular on Palestinian street but Palestinian Authority (PA) hates its guts for pointing out its corruption; in Indian administered Kashmir, Al Jazeera earns the wrath of New Delhi for showing poke marked faces of Kashmiris scarred by pellets – but even in Islamabad, its broadcasts are not available on local cable while BBC and CNN are.

Interestingly, Saudi observers say that Saudi Arabia itself was less likely behind the demand to shut down Al Jazeera; other members of the quartet like Egypt and UAE may have pushed Saudi Arabia towards this position.

Read More: How did Qatar overcome obstacles of Gulf blockade?

Abdur Rahman Rashid, former General Manager of Al Arabiya, a Saudi-funded network, echoes the same what Hugh Miles had predicted in Feb of 2011 – that Al Jazeera was always careful of Saudi sensitives but it was a huge disruption inside Egypt.

Egyptian authorities arrested three Al Jazeera journalists, charging them with supporting the Muslim Brotherhood, which by then had been banned as a terrorist group.

Nowhere is the struggle over news more intense than in the Middle East. Currently, there are more than five hundred satellite and terrestrial channels beaming into Arab homes across 22 countries of the region – that share a common language, history and religion.

Almost every major network of the world is running an Arab broadcast; apart from BBC Arabic, the region has RT Arabic, France 24 Arabic, CNN Arabic, CCTV Arabic and so on. Iran and Turkey are eager to extend their influence.

The Arab world’s bitter fight over the facts of the region’s revolutions and wars since 2011 foreshadowed the struggle over the news in the West. The region’s governments and opposition groups have waged a relentless campaign to define reality on their own terms.

In Egypt, as pointed out earlier, the government calls the 2013 overthrow of Mohamed Morsi a revolution, while others call it a coup. The Muslim Brotherhood casts itself as a pragmatic political group, while opponents regard it as a dangerous religious movement.

In Syria, the regime cast its campaign against rebels and jihadis alike as a war on terrorists. It is this difficult contested media landscape, that is still to this day dominated by Al Jazeera. For now, the network is resisting the demands placed upon it by Qatar’s opponents in the Gulf.

And Doha is fighting against the GCC quartet – so far. But experts on the region warn that “if the campaign succeeds in modulating the Arab world’s most distinctive and divisive voice, something essential might be lost from the region’s media landscape”. Without Al Jazeera, the Arab street will lose its voice – and its heart.

Previous article
Turbulence in the Heart of Islam
Next article
Will ‘vision 2030’ prove to be a savior for the Saudi Arabian economy?