Pakistan’s Ambassador to the United Nations sat down for a meeting with UNSC President, Joanna Wronecka, and apprised her of the deteriorating situation in J&K. Dr. Maleeha Lodhi urged the UNSC to demand India to cease and reverse its actions, and avoid violating the UNSC resolutions with regards to Kashmir. 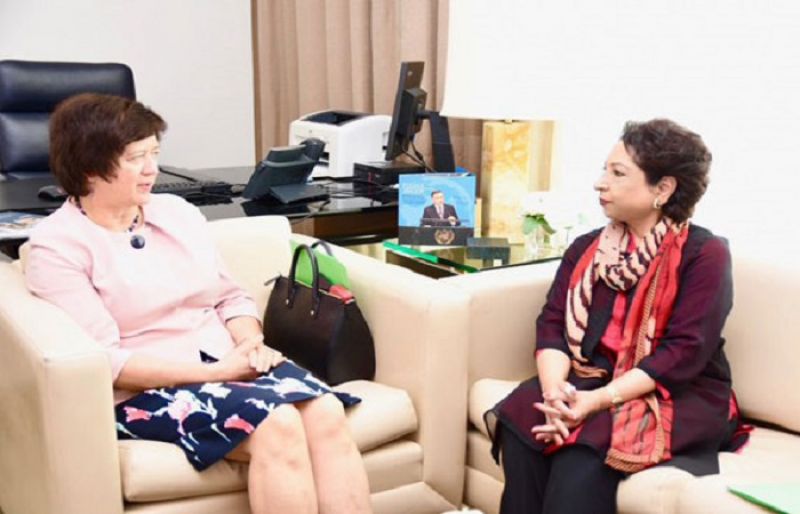 Dr. Maleeha Lodhi, the Pakistani Ambassador to the United Nations, on Tuesday, briefed the UN Security Council President, Joanna Wronecka, among other UN diplomats and officials, of the rapidly deteriorating situation in Indian-occupied Kashmir in the aftermath of India’s abolition of Kashmir’s special constitutional status.

I will be meeting the President of the UN Security Council today at UNHQ to apprise her about the threat to regional peace and security posed by India’s illegal actions in occupied Jammu and Kashmir and its violations of SC resolutions and international law pic.twitter.com/v091OhZyAS

The Pakistani ambassador spent a busy day at the United Nations in a bid to apprise as many diplomats and UN officials of India’s blatant disregard and violation of the UN Security Council resolutions with regards to Kashmir. Dr. Maleeha Lodhi informed the UNSC and its President that the abolishment of Article 370 has triggered a crisis that threatens to drown the region in conflicts and disputes.

Dr. Maleeha will also hand over the letter penned down by Foreign Minister Shah Mehmood Qureshi to the President of the Security Council, in which Islamabad has rejected the illegal Indian annexation of the occupied Himalayan valley, in blatant violation of UNSC resolutions.

I will also be handing over to President of SC, the letter from FM SM Qureshi to UNSG which categorically rejects the illegal Indian annexation of occupied J&K in express violation of SC resolutions and calls upon the SC to ensure full compliance with its own resolutions on J&K pic.twitter.com/ekf8nTzJ6k

In her meeting with the President of the UN Security Council Joanna Wronecka, Dr. Lodhi apprised that New Delhi’s decision to abolish Article 370 is “an egregious assault on the dignity of the Kashmiris.”

I met the President of the UN Security Council Joanna Wronecka Tuesday afternoon at the UN to apprise her about the grave threat to regional peace and security posed by India’s illegal actions in occupied Jammu and Kashmir and its violations of SC resolutions pic.twitter.com/xXRqLIzLt5

Sources reveal that the Pakistan UN Ambassador said, “The tragedy of Kashmir has thus come full circle.” Apprising the UNSC President in the history of Indian occupied Jammu & Kashmir, Dr. Lodhi informed that India has falsely and illegally occupied the territory back in 1947.

Maleeha Lodhi informed UNSC President Wronecka, “The real Indian intention to institute these changes is to alter the demographic structure of the Indian-occupied Jammu and Kashmir.”

As the preeminent body tasked with the maintenance of international peace and security, the Security Council should take immediate cognizance of the situation.

Dr. Lodhi observed that such actions are a violation of the plebiscite arrangements ordered by the UNSC resolutions, and India is not only violating the sanctity of the Security Council resolutions, but it is in fact determined to quell the justified freedom struggle of the Kashmiris, who have been demanding the right to self-determination for decades.

The Pakistani ambassador to the UN reminded that the UNSC resolutions with regards to Kashmir state that “the final disposition of the State of Jammu and Kashmir will be made in accordance with the will of the people expressed through the democratic method of a free and impartial plebiscite conducted under the auspices of the United Nations”.

Ambassador Maleeha Lodhi noted that the unilateral and irresponsible measures taken by India cannot violate the legal bindings of the UNSC resolutions, and are, therefore, legally null and void. She noted that Pakistan condemns India’s brutal and illegal tactics to solidify its unlawful occupation over Jammu & Kashmir.

Dr. Lodhi said, “The valiant Kashmiri struggle for self-determination cannot be crushed through a parliamentary act.” The Ambassador informed UNSC President Wronecka that Kashmiris stand united in their rejection of the Indian occupation and New Delhi’s move to abolish their constitutional rights. She highlighted that sane democratic voices have also condemned the Modi-led government for undertaking such an undemocratic decision for their own political objectives.

Apprising the UNSC President in the history of Indian occupied Jammu & Kashmir, Dr. Lodhi informed that India has falsely and illegally occupied the territory back in 1947.

Dr. Maleeha Lodhi said, “Tellingly, India is fully aware of the illegality of its actions.” She noted that in order to implement this decision, Modi-led government deployed 38,000 Indian troops to the occupied Himalayan valley, all tourists and outsiders were ordered to vacate immediately, a deadly curfew has been imposed and all communication services have been shut down while all mainstream Kashmiri leaders are either detained or under house arrest.

Ambassador Maleeha Lodhi said, “These are not the actions of a state with legitimate claims over territory but are acts of a usurper who seeks to occupy territory and subdue its people, under duress and subjugation.”

Sources reveal that the UNSC President Joanna Wronecka paid close attention to the Pakistani Ambassador as she has been closely following the crisis erupting in Kashmir. Dr. Maleeha Lodhi called upon the UN to bring an end to Indian violation of the UNSC resolution, and preserve the sanctity of life and democratic values across the occupied Himalayan territory of Kashmir.

The Pakistani envoy to the UN said, “As the preeminent body tasked with the maintenance of international peace and security, the Security Council should take immediate cognizance of the situation.”

Dr. Maleeha Lodhi concluded, “After all, at stake are not only the imperative for regional peace, but also the credibility and standing of the Council to uphold its own legally binding resolutions.”